Its the #Cannamazon momma here with another installment of ‘how can cannabis augment people’s lives’? Find me on Facebook for postings that are relevant and informative with a feminist streak a mile wide.

Today I bring you some tips and tricks that will make the radiation of your breast more of a picnic and less of a barbecue.

What appalls me most is knowing that every day, women are going through what I endured without the comfort or relief that comes from cannabis knowledge and/or access and THAT is a crime I intend to do something about. I believe in a culture of generosity and the tenets of ‘See one, Do one, Teach one’ and hope that everyone who reads this, uses the information for their own comfort but also shares it widely among their circles.

When one finds themselves in the dubious distinction of a cancer diagnosis, the impact of everything one hears is overwhelming. Half of what one hears doesn’t stick and the other half of what you hear contains words like ‘death’ and ‘threatening’… no biggy, right? 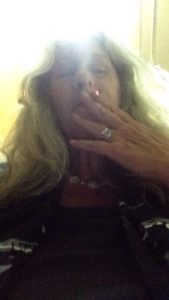 Asking the right questions, getting no answers

When I asked what effect radiation would have after the sessions were completed I was given bright glib answers from everyone. ‘Some folks don’t miss a beat and keep right on working!’ was the common reply, leading me to believe that it was going to be a mere inconvenience. I could handle that. The other common answer to my asking what effect radiation has on the cells in my breast was ‘Everyone’s a snowflake! You’re all different!’ which gave me exactly zero preparation for what was to come.

When my armpit erupted in blisters in a patch that was roughly 5 inches across, I just about lost my mind. My breast would shift and all that skin would scream. Laying down, sleeping? That didn’t happen for a few days. I won’t go into the details but will post a pic to give an idea of the area I’m talking about. I finally managed to get myself to the pharmacy and had a pharmacist look at it, as I don’t have a doctor and I didn’t have the strength to do a doctor’s visit which requires jumping through hoops and hanging out for hours among strangers in public in pain AND a drug store trip so I eliminated the middle man and went straight to the dealer. She showed me how to use these sheets of a clear filament called Nexcare and taught me how to apply them since my skin was so tender. She also whispered to me that she was able to get me cannabis cbd oil if I needed a source. 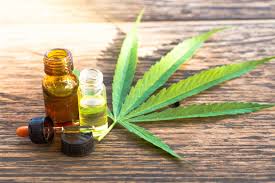 I didn’t need a source but it made me think. I hadn’t considered using cannabis products on my burn but along with a good assortment of other cannabis products,  I knew I had a pack of cbd/thc suppositories in my fridge.

Melt your way to relief

When I got home, I set myself up so I would be in a stable, supported position for at least a half hour and then I tucked one of those little buttery suppositories under my arm and another one under my breast. I sat there feeling the screaming pain in my breast and underarm subside JUST. THAT. FAST. They are not just for sticking in orifices, people! Tuck them in folds near the sore spot! Sitting still for five minutes will allow them to melt, the coconut oil to sink in and there is literally minimal moisture remaining from the little one inch long bullet of infused bud butter. They come in little plastic molds that let you rip them off one at a time as you need them and are easier to handle than the RSO.

For the next five weeks as the burn healed, I soothed myself with melting suppositories whenever the last application wore off.

I also learned that my body hates the glue on those bandages as it blisters all around the edges where it pulls on my skin but the butter didn’t hamper the bandage sticking at all. However, the clear filament lays right on the wound and doesn’t hurt at all so don’t be afraid of it touching your burned skin. 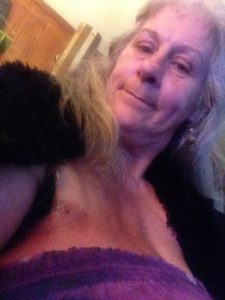 The only scars I have, four months after, are the repeated lines of those little blister rails atop my breast that have finally healed. They are more prominent than the 4 inch scar from where the cancer was cut out. That scar is almost undetectable, the surgeon did such a good job. The skin where the burn was is darker but has returned to natural. Other patches of skin on my breast are still reeling from the radiation and it is hard and tender to the touch in different areas every day as the healing moves through. I keep that at bay with applications of salve that contains cbd and arnica. The daily attacks now consist of sensations of  little biting ants and one inch double ended migrating pins but they don’t stand a chance against my plethora of solutions, all cannabis based.

Its been six months since my surgery and my breast is still in healing mode, swollen to a third larger than her sister. There was a tunnel dug that goes about 8 inches from where the scar is to  the armpit where the surgeon removed a single node. I was relieved that it had not metasticized, when it came back from testing. It feels bruised when I move but its less every day. I am not relieved that weeks later, I feel that tunnel every single minute as I tire. My pendulous breasts hamper me and move in ways that counter my need to be painfree. Wearing a bra becomes a requirement for sleeping but the lymph passages require freedom to move so letting the girls swing is reccommended. That doesn’t feel so good and I can’t imagine doing it without CBD ointment. The healing track within, the radiated skin that is flushing out whatever, its all a constant grievance but I have cannabis solutions for EVERYTHING.

During the healing of the radiation, my day has included heroic dosing of RSO as well as rubbing salve on my breast (and knee, guess who is too tall for normal furniture when housesitting?) and taking note of my capacity so as not to stress it. Heroic dosing is 60 grams of RSO in 90 days, after which I will adopt a smaller maintenance dosage. 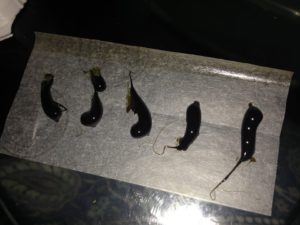 I stay out of stressful environments and struggle with keeping up with current events because when one is ‘healing’ one doesn’t need to be grieving, but its hard not to when the world is in such chaotic shape. The anxiety that washes over me is ONLY helped by my ingesting edibles in the form of gummies or gelatin caps of cannabis or coping with muscle pain brought on from resultant tensions is dealt with by salve, lotions, oils that I rub on and oils that I ingest. Smoking also soothes my anxiety but its pricey and my budget is such that I have to really moderate or I can go through funds too quick.

I am a full time caregiver for a friend with multiple mild barriers. His meds make him shake so bad in the morning that he can’t make his own coffee until he has a few puffs. He immediately calms and can function so I start our day with some smoke and then carry on from there.

Legalization and its effect

All through my diagnosis and healing, the crisis of legalization has tried to victimize everyone who benefits from cannabis therapies. The Canadian govt has become dealers of faux marijuana and true cannabis is being shoved back into the shadows and its the underground that is being bolstered by the bureaucratic stupidity. Where Canada could be a world player in role modeling a better way, it jails the old craft contingent and rewards former premiers with huge windowless grow operations that know nothing or believe nothing about cannabis’s amazing powers or what is required to get cannabis to patients. They only see the potential for money.

The traitorous LP industry that is trying to muscle in has products that one can’t smell or see, packing that is ridiculous and over the top with no sustainability loop built in. The threat of corporal punishment is real for dispensary providers and the stores that are allowed and not threatened are run by traitors who used to be the ones putting people in jail for cannabis use. The laws require that dosages are small, the prices are crazy and then there’s tax. Forget about it. Put your ear to the ground and get on social media to ask around if you don’t have a dispensary. The tide has turned and product availability might not be traditional in that what’s in ‘stores’ might be questionable and inadequate for a patient’s needs, but everyone now knows someone who has access and its easy to ask a few trusted sources. Or ask me. <3 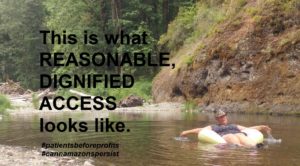 SNIPS: In my next installment, I’ll go into how I created my own delivery system to ingest the Rick Simpson oil or RSO as it tends to come in some interesting packaging that makes it a real challenge to access. When one is mobility barrier-ed or shaky, handling little syringes is difficult. They also really look ‘druggy’ which is triggering so I avoid the product that is provided in those. My source provides me with little brown glass 5 gram vials that can be recycled and I’m much happier with that. Check in for how I make that work for me and how you can use this trick to help your less able friends or patients.

Next article Papa Puff’s Top Articles of the Week! October 6, 2019

A History of Marijuana Law in the USA