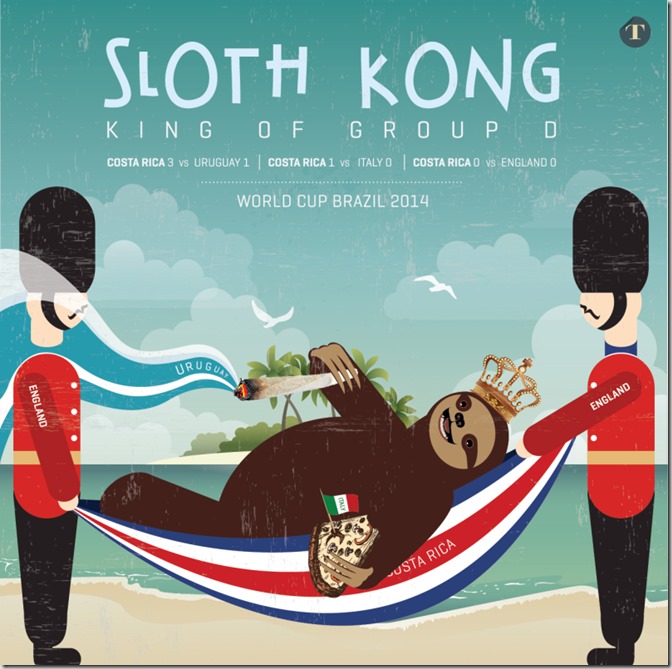 Photo from www.TicoTimes.net Costa Rica’s Sloth Kong enjoys some legal weed from Uruguay after success at the World Cup

Costa Ricans (and mascot Sloth Kong) are doing a lot more than just knocking top teams out of the World Cup. In my previous blogs on Costa Rica I outlined the Costa Rica Medicinal Cannabis Movements campaign to legalize medical cannabis in their country. As the signature gathering campaign comes to a close and the proposed regulations are finalized for presentation to the Costa Rican public for a vote, a likeminded policy group prepare to welcome delegates from surrounding countries for the 5th annual Latin America Drug Policy Conference. There is a side event delegated to the discussion of medical cannabis that the Costa Rica Medicinal Cannabis Movement will attend.

This is the first year that the conference is happening in Costa Rica. Among the attendees are reform groups Confredrogas, Intercause, T.N.I., and Syncotropicas. They also expect representatives from the states of Colorado and Uruguay, where cannabis is now legal.  These drug policy reformers are putting pressure on their governments to examine their official position on drug policy and adapt to the lessons being learnt around the world. The previous president of Costa Rica, Laura Chinchilla expressed a willingness to discuss medical cannabis, but was recently voted out of power.

The representatives are invited to participate in discussion panels on a variety of drug policy issues. Some countries have shied away from the spotlight as there is still much perceived political risk involved with engaging this controversial debate. It has only been over the past decade that public opinion has swayed in North America toward open debates and regulatory experiments. In Central and South America the movement is younger still, however there is a tradition of progressive reform in Costa Rica that makes it an ideal candidate to join the pioneers of modern drug policy.

I spoke with Ernesto Cortes from the registered drug policy reform group ACEID, who are organizing the event, about what challenges Costa Rica face with other local governments. Ernesto notes that there has been no public discussion between governments about the possibilities of drug reform in the region and Costa Rica has seen no support for legal regulation of cannabis for general use.

There is a split of opinions amongst governments in Central and South America. Mexico, who have suffered the most civilian casualties in the War on Drugs, are known to be part of a block of countries open to the debate. The block includes Columbia, Uruguay and Guatamala. The Guatamalan president has come out in support of legalizing all drugs and the government will issue a report in October that outlines their plans for legalizing cannabis and opium crops in the future. Honduras has been an outspoken opponent of drug policy reform.

There is some concern that the countries on their borders (Nicaragua and Panama) would be recipients of illicit substances that are diverted to the black market. The U.S. Department of Justice has recently chosen to deal with this issue by focusing on those who attempt to cross the borders or break the State’s laws.

Costa Rica is subject to heavy cocaine traffic. It is used as a port between Columbia, Jamaica and the lucrative North American market. With no national military, an increased police presence on roads and a special task force is employed to fight back. While I was travelling through the country I passed through numerous checkpoints, some of which were operated by officers with assault rifles. Because Cannabis is placed into the same legal category as Cocaine, the two have become associated in the perception of the public.

As has been thoroughly debated in North America, the association between illicit drug use (see the Gateway theory) is a function of prohibition, not the substances themselves. A drug dealer who sells both Cannabis and Cocaine, is likely to offer the former to lure individuals into using the latter. This is especially troubling as medical patients may be more vulnerable to manipulation by these unregulated entrepreneurs. It is a too common tale that people who are suffering withdrawal from prescription medications will substitute with illicit versions from the black market. In my experience at the Victoria Cannabis Buyers Club, medical cannabis can act more like an exit drug for those seeking to withdraw from drug dependence.

Next week I will conclude my discussion with Ernesto Cortes and give a final report on the signature gathering campaign to legalize, tax and regulate medical cannabis in Costa Rica.