There is good scientific evidence that cannabinoids, and in particular Cannabidiol (CBD), may offer control of the immune system and in turn provide protection from viral infections (4). Cannabis has already been recognized to inhibit fungus and bacteria and can be considered a new class of antimicrobial because of the different mechanism of action from other antimicrobials. (1)

Ebola is a complex RNA viral organism that causes the cell to engulf it by pinocytosis, and then the virus hijacks the cell to replicate itself. This replication can involve many mutations in the RNA code that make it difficult to impossible to create an effective vaccine. There are U.S. Patents showing evidence that Cannabinoids have significant anti-viral activity. (3) (4)

The cause of death by this virus is the body’s own immune response to the viral infection. This is what causes the mortality and morbidity of this infection.  Subsequently, the virus triggers the immune killer cells to release the enzymes (cytokines) they hold. This release of enzymes causes other lymphocyte to release even more Cytokines in a Storm of release. This is properly termed a Cytokine Storm.

Causes small blood clots to form in all arterioles, called; DIC or Disseminated Intravascular Coagulation.
Causes a massive Coagulopathy where the blood will not to clot properly simultaneously with the DIC (Bleeding and clotting occur at the same time.) Toxic Shock Syndrome occurs when the cytokines release causes the blood vessels to dilate to such an extent that a shock state exists. 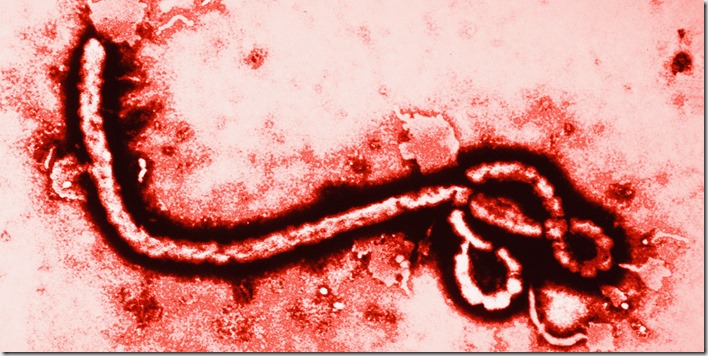 The Ebola virus also attacks the adhesions between cells caused by the immune Killer cells to release of VEGF (Vascular Endothelial Growth Factor) which result in the destruction of the Tight Junction between cells and causes a fluid leakage between cells until bleeding occurs. The inhibition of VEGF by cannabinoids prevent the cellular junctions from haemorrhage.

Cannabinoids Inhibit VEGF and inhibit Glioma brain tumors growth by this mechanism. (6) It is reasonable to predict that inhibition of VEGF and other Cytokines by Cannabinoids during an Ebola infection will help the survival of this deadly disease.  (6 and 7) Stopping the release of Cytokines will be a key feature of treatment of this deadly disease.

The discovery and application of the Endocannabinoid Signalling System is proving to be the control of virtually all diseases of mankind. Cannabinoids are emerging as a new class of drugs that treat infections of bacteria, fungi and virus by different mechanisms of action not found in any other class of drug. (1)

Cannabinoids are proving to have significant cidal (killer) activity to many viruses, including hepatitis C and the HIV virus. Cannabinoids down-regulate (inhibit) the immune response to the infection (2) (3). The cited U.S. Patents (3 and 4) are proof that cannabinoids inhibit many different virus strains from replicating. These patents also prove cannabinoids decreases the body’s immune over stimulated response to the viral infection.  Claims that are made in these U.S. Patents include the following:

(refer to patent for exact quote.)

In Summation; The US Patents prove down regulation of the immune system by cannabinoids may be a key in survival of HIV and may indeed translate into survival for Ebola patients. The direct Killing or Cidal effect of Cannabinoids is proven in HIV infections,(4) but not yet in Ebola. Inhibition of VEGF is crucial to prevent endothelial leakage and haemorrhage.

Because cannabis is so very safe especially under doctor supervision, I believe it is crucial for the medical community to start human trials on survivability of Ebola infected patients regardless of the political restraints.