Deprecated: The $control_id argument is deprecated since version 3.5.0! in /home/oq5ayjaeetjt/public_html/wp-content/plugins/elementor/modules/dev-tools/deprecation.php on line 304
 Counselling and Cannabis: Musings on an Interview with James Kerr - Cannabis Digest
Skip to content 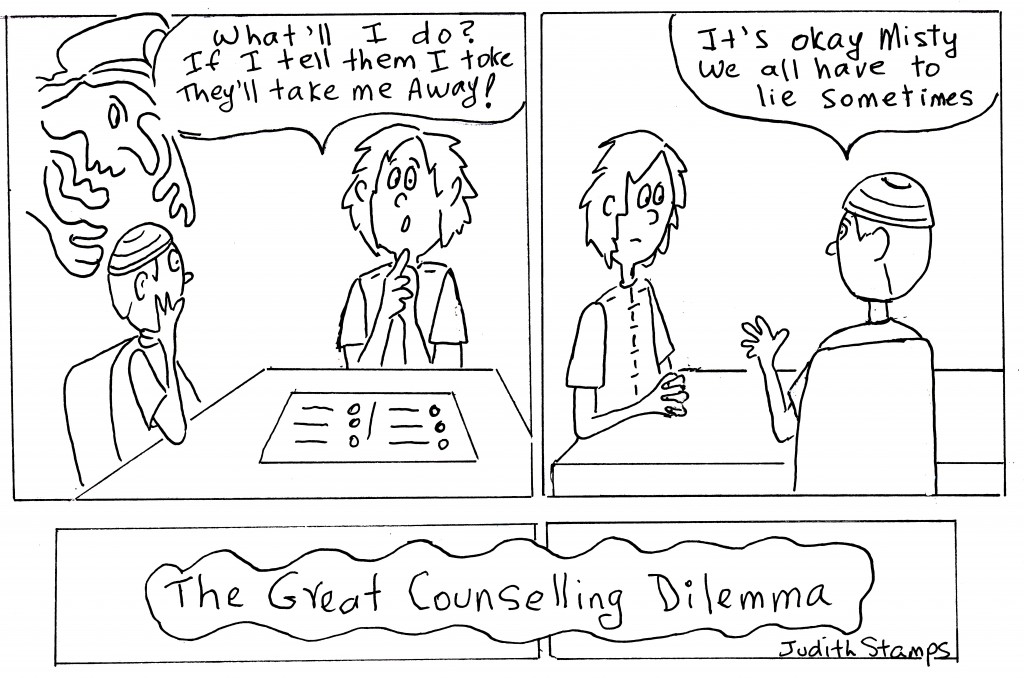 Picture this. You are a friend of cannabis. You are you in the midst of a crisis. Maybe you’ve lost your job, or your relationship. Everything seems to be falling apart. You think you could use some counselling. Who do you call? From what I can tell: hardly anyone. In fact, you could have a further crisis tracking down a therapist who will not regard your plant friend as the primary issue—if you mention it, that is. Of course, you don’t have to mention it. You could, like an international spy, remain in hiding. But if you are in hiding, what are you doing in a counsellor’s office? Here is a dilemma worthy of a documentary. Or at least a spy comedy. To either of these, let today’s blog serve as a preface.

Inquiry into such a preface began last Tuesday, when I interviewed James Kerr, a cannabis friendly counsellor in Victoria BC. I gathered from our conversation that such counsellors are rare. Intrigued, I went off to do some internet exploring. I wanted a rough measure of attitudes out there on the psychological benefits of cannabis. So I searched the web using a variety of key words. Google searches provide ten items at a time; for each search I went with the first ten. Along the way I got enough therapeutic advice to grasp the scope of the problem.

I began with the key words ‘cannabis friendly counselling.’ Out of ten, eight sites offered to treat my cannabis addiction. The first one described cannabis as a central nervous system depressant, a characterization so mind numbingly inaccurate, it will receive no further comment. From me, anyway. The second site called cannabis a double-edged sword. The metaphor is bad enough, but in this version the anti-cannabis edge was by far the worse. The one positive site, Psychology Today, provided a transcript of a podcast by Boston psychiatrist Jeremy Spiegel, dated March 2013.1 In Spiegel’s experience, cannabis is effective in undoing negative conditioning. In fact, he states, the plant has passed a double blind test on this point. I must look this up.

The key words ‘cannabis and counselling,’ yielded ten negative items out of ten. Some selections informed me that cannabis causes anxiety and depression; others, that is addictive, and will provide a fake escape from my troubles. The words ‘cannabis and psychotherapy’ worked better. They yielded six positive sites. One provided a chapter of William Novak’s work: High Culture.2 This book is worth reading. One was a link to grasscity.com. I have yet to explore this site. A third, from DrugSense’s MAP project, lists author, Dan Merker, who recommends cannabis as an adjunct to grief counseling.3 The fourth, from the newsletter, Counterpunch, features a 2006 interview with Dr. Jeffrey Hergenrather.4 The Article is called: “What Have California Doctors Learned About Cannabis?” Speaking ten years after the passage of California’s Proposition 215, Hergenrather recounts a survey of 1,400 patients. Of these, 30% took cannabis for depression, anxiety, attention deficit problems and other such ailments. All were treated adequately with Cannabis. A tiny paragraph in Wikipedia’s entry on bipolar disorder notes that cannabis can help. The final item led me to Harry Hermon. A Manhattan based psychiatrist, Hermon observes that cannabis puts patients in a more receptive and empathetic state. Hermon is unique. He is the first and only therapist listed that actually counsels with the help of marijuana.5

When I switched to ‘cannabis and psychoanalysis’ I got two positive items. The first was fantastic and should be read by everyone. It is a personal story by Lester Grinspoon called “To Smoke Or Not To Smoke: A Cannabis Odyssey.”6 The story ends with a reminder that cannabis enhances appreciation of our surroundings, helps in problem solving, and needs to be explored for future therapeutic work. The second, an article by Tod Mikuriya, is a summary of cannabis’ effectiveness in treating PTSD. Mikuriya died in 2007, and Grinspoon is 86. If you have not heard of these two, look them up soon. In the meanwhile, ask yourself: Where are all the young people? Aren’t they offering cannabis friendly psychotherapies?

The search words ‘Cannabis and Jungian therapy’ yielded one positive result, though it is excellent. The site led me to a series of interviews on Shrink Rap Radio with Gerald Trumbule.7 Trumbule is a former neuropsychological researcher at the Walter Reed Army Institute of Research and NASA. He is ardently pro cannabis, and is a delightful ‘wild-man.’ Do get acquainted. Otherwise in the literature, one gets a positive view on cannabis and counselling from New York based psychiatrist, Julie Holland.8 By this stage in my search I had come to see James Kerr’s point.

James moved to Victoria BC from Camrose, Alberta in 2012. He had been working at the local hospital as a counsellor in an emergency based program. During his time there he had been struck by this fact. All patients had to fill in a standard intake form, which asked what substances they took. If they mentioned cannabis they were diverted to a drug rehabilitation program. Something similar happened in private practice too; he sometimes got patients on the rebound from other therapists. When James came out west, he decided to try something different. With the help of employment advice acquired through Work BC, he developed a plan to become a niche therapist. He would counsel cannabis fans that just wanted to talk about their life issues. Work BC liked it.

Business plan in hand, James began to do more reading on the subject. At some stage he came across Joan Bello’s work: The Benefits of Marijuana: Physical, Psychological and Spiritual, of which more later.9 Bello’s book became his essential guide. He participated in the Sensible BC campaign, BC’s citizen’s initiative to decriminalize cannabis. Meanwhile, he set out to visit Victoria’s dispensaries. Then he met Ted Smith. The meeting was turning point in James’ journey. Ted was extraordinarily welcoming. He invited James to spend as much time as he needed getting to know the patients at the Victoria Cannabis Buyers Club (VCBC), and permitted him to circulate a brief questionnaire, the better to understand them. These activities gave him grounding in the local scene, and in the psychological issues faced by members of the medical marijuana community. He was able later to do a similar survey at the short-lived Vancouver Island Health Advocacy Centre (VIHAC), a ‘harm reduction’ style dispensary. He put up posters wherever he could, and set up a counselling office next door to VIHAC. The staff referred patients to him, and he began to do well. When VIHAC closed, James got work as an employment counsellor at a Jubilee hospital outpatient program, and now has 50-60 patients in private practice. This may be as good a time as any to note that there appears to be no end to Ted Smith’s salutary influence on this town.

In James’ view, cannabis can bring special insights; if his patients are having these, he wants to hear about them. His philosophy is close to that expressed in Joan Bello’s book, noted above. For Bello, cannabis leads to health. It promotes fuller, deeper breathing, bringing relaxation to every part of the person. Besides this, it promotes awareness. It is much maligned in industrialized societies because it does not promote love for material acquisition. “A relaxed attitude,” she writes, “is only harmful to the goals of a workaholic.” At its best, she adds, cannabis is an aid to spiritual self-evaluation, and to deepening one’s relatedness to others. In James’ interpretation, the best uses of cannabis explore these ideas. The better recreational practices set out, with the aid of cannabis, to explore the natural world, to engage in creative projects, or deepen one’s understanding of a chosen subject. His advice? Have some cannabis and visit the art gallery, or the beach. Of course if it helps you to relax, that’s good too.

I asked James if there is a group of professionals in town with a similar outlook. No. He has a colleague that shares his viewpoint. I asked if it is standard practice for counsellors to demand signed paperwork, itemizing what prospective patients eat, take or smoke. It is. I then ran all of the above by a librarian friend, and based on our conversation, did one more refined search. I tried ‘cannabis for psychological healing.’ There I got an item on pro cannabis Republican politician, Ron Paul. Otherwise I read things like: “Cannabis: A Serious Warning.” With the phrase ‘psychologists who like marijuana’ I encountered a single nugget, friendly but irrelevant: Joints are sometimes called Love Boats or Happy Sticks. ‘Counsellors who are pro cannabis’ yielded ads for addiction counselling plus “Five Pro Pot Myths.” ‘Psychotherapists with positive views on cannabis’ yielded “Use Positive Thinking to Beat Cannabis.” Then there was ‘counsellors who love cannabis,’ my Hail Mary Pass. This brought: Are you a love addict? Take my advice. When sorting out your difficulties, pick your helpers carefully. Have a good week.