Soon after Marc Emery was released from prison I bugged him to grant me an interview. Luckily he had time before taking off to Europe for his first trip abroad with his wife, Jodie.

Here is what he had to say.

1. Can you describe your first moments of freedom?

I didn’t sleep the night before at Tansas Parish Prison in Central Louisiana, where I had been 5 weeks awaiting deportation after my sentence ended at Yazoo Federal Prison in Mississippi on July 9. At 3.30 am, they came to get me and the process started. By 4.30 am I was in a vehicle, in leg irons, a chain belt around my waist and handcuffs attached to the belt, which would stay on me for the next 12 hours until I arrived in Windsor, Ontario. So all chained up I was until I got to Windsor. I was unchained in the Canadian Immigration office, and taken to a discreet door through which I was to exit ‘into Canada’.

That moment, opening the door and coming through was like going through a time/space portal, from a world of black & white into a starburst of colours.

The drab, grey Immigration office instantly opened up (at 4.20 pm remarkably) into a brilliantly sunny world of hurrahs and cheers as I was greeted by 20 or so glass eyes (TV and video cameras), 100 people, wafts of pot smoke (Immediately blown at me!), and Jodie, who hugged me and then handheld me and pulled me along to a podium in front of Windsor City Hall two blocks away. I felt immediately very comfortable. At the podium people had brought fruit plates with every kind of fruit, because interviews leading up to that day had described how I missed fresh fruit in prison most of all. There was a lovely prepared vegan vegetable plate too. Throughout the 90 minute press conference, I nibbled away at the fruit and vegetables. I had three tokes about two hours into the press conference. By next day I was smoking several joints.

Within 24 hours, the 54 month prison experience was quickly fading from my consciousness.

2. Did you have any pleasant surprises in jail?

I was in six US prisons in my 4 1/2 years there, and in each one I encountered very polite, considerate and friendly inmates. In fact, I rarely heard an unkind word said to me by my fellow prisoners, and that was probably the greatest and most welcome surprise. Federal prison guards are very professional over-all too.

When I arrived at Yazoo prison, a few days later there was a ‘Yard Show’, musical performances by bands. One group of musicians was terrific, and I watched them do a 30-song set of classic rock songs that were note perfect. I befriended them and asked if they needed any music books as the prison had none, tab books from which these guys could learn songs. I offered to order some. So after I had a number of them arrive by mail, I hung out with the musicians a bit and tried to learn guitar. I had never played or even picked up a musical instrument before.

I struggled with a guitar for about 10 days when ‘Grizz,’ a musician in the band I admired, came to me and said: “If you put that guitar away and pick up the bass guitar and learn it, you could be in my band, we need a bass player.” Apparently, the band had reconfigured and now needed a bass player. I was dumbfounded. These guys were ace musicians with 15-30 years experience each! I said: “You’re saying, if I start learning to play bass, I can be in your band? That would be amazing, incredible, and hard to believe. I know nothing. How can that be?”

“I’ll teach you. Our next show is in 6 weeks, you should be ready by then.”

I was in the band! An incredibly good band. So Grizz taught me three hours a day, every day, and six weeks later, on July 2, 2011, we did our first concert, 8 songs, and although I hit only the root notes of those songs, it went well. The other guys were so good that my novice ability was largely concealed. It was the only time I played only root notes in concert. By the Labour Day show in early September, I had gotten better and continued to improve.

I practiced every day and over my 3+ years at Yazoo did 14 yard shows and had so many wonderful memories of being in the band. We had a terrific electric studio and amplified sound, and it was really the most awesome thing. On my return to Vancouver, I was given a Fender precision Jazz bass by some good friends. I hope to play it in a band here at the BCMP lounge, but my schedule for the next year is such that I will struggle to find opportunities to play.

3. For a while in jail you were very ill with an infection. Did they treat you well?

At the immigrant private prison in Georgia, I got an infection on my buttock that was Methicillin-resistant Staphylococcus aureus (MRSA). This was a 50 cent piece sized hole in my ass, one side of which was red & inflamed, that was very painful for several days until it broke the surface of my skin and then wept blood and pus for two weeks. I know what you’re thinking. It is even more uncomfortable to have it in prison, particularly in a dorm of 64 guys using just 4 toilets.

The medical care system in any prison is under-staffed and harried, but they were really overwhelmed at D Ray James, the privately owned GEO Group prison in southeast Georgia, near Jacksonville, the farthest I would be from Jodie in all of the US. Still, they know how to deal with MRSA infection outbreaks and I had this giant white pill (Bacterum) to take every 12 hours for 14 days. I got 2 more annoying but far less threatening MRSA infections within the next three years at Yazoo Medium.

4. Did anyone smuggle anything into jail for you?

This food was stolen by an inmate from the warehouse, the kitchen or the officer’s eating place, and then it would be sold to another inmate. I was known to pay the most because this food was vital to me, and I had the money. Black market food cost me $300-$500 a month, always. Why did I need to buy these common food items? The commissary does not sell any raw fruits or vegetables; it sells only processed food that is, almost without exception, non-nutritious and harmful to health. 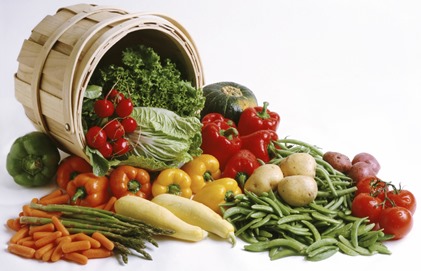 Fresh raw vegetables entered the prison, but were served only in excessively boiled form. And even then, these vegetables were almost always green beans or cooked carrots.

5. Do you have any advice for someone going to face a jail sentence?

I’d like to know if it’s a Canadian or American prison. There are humane prisons in Scandinavia, Germany, the Netherlands, or Belgium. You definitely don’t want to be in any prison in Latin America, Central America, Mexico, Africa, or Asia.

I really don’t know what advice I would give. I would need to consider their circumstances, charges, and expected sentence, because my circumstances were very unique. My experience won’t really be the experience of anyone else. I almost never heard an unkind word said to me in 4 1/2 years in 6 US federal prisons, and even 66 days in North Fraser Pre-Trial in BC while awaiting extradition. I was always myself. I was always busy. I had lots to do. I had a daily NY Times subscription. I received 25 magazine subscriptions. I read a book every ten days. I learned bass guitar, played in a band for over 3 years, did 14 outdoor electric rock concerts.

A US federal prison, medium security, which has dozens if not hundreds of people sentenced to life without parole for drugs, and not necessarily large quantities of drugs either, was a very safe place for me to be.

6. When Jodie becomes an elected MP will you still say nasty things about the government?

Probably not. Telling the truth will be done more diplomatically. I would not want to make Jodie’s life as an MP difficult and embarrassing. Any great political ideas will have to be phrased just right to achieve results and not have any others lose face or become defensive. 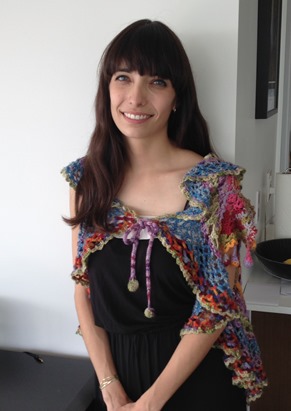 7. Rumour has it you are forming a band. Will you be going on tour?

I loved the band I was in, called YAZOO. These were extraordinarily talented musicians, all having 15-30 years experience, people who in the real world would never play with a novice like me. So I had great teachers. Talented people, they made me sound great, and that made my 3 years in prison extremely gratifying.  But now that I’m home it is going to be a struggle to practice, meet a practice schedule, and be in a band when Jodie & I are speaking in Europe for much of September, October, and November, and doing a Canadian university tour in January.

8. Aside from the drug war, what is the next biggest problem our society faces?

Ending the drug war, ending all prohibitions on consenting behaviour is the direction of a civilized society, and will greatly alleviate other crises: war, refugees, the militarized police state, burdensome taxes, police accountability, etc.

The next challenge will be to end war. War is deadly to cultures, the environment, and human life. It is so destructive to economies. Government and war are linked, and all weapons of war are paid for with your tax dollars. So we have to cut off the funding, worldwide. 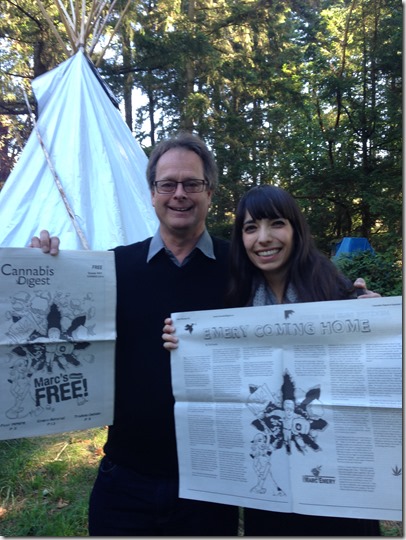 The Right to Grow; Extract Interveners and Baker Basics and more from the Cannabis Digest this week November 15th – 21st, 2014 with Owen Smith Subscribe to the Youtube Channel!   LINKS/NOTES   Nov. 15th Matt Mernagh Canadian Cannabis Champ Matt Mernagh weighs in on the Right to Grow our own Medicine . http://cannabisdigest.ca/right-grow-medicine/ The […]

By Owen Smith Kirk Tousaw is one of Canada’s top Cannabis lawyers. Born in the state of Michigan, Kirk has been an advocate for cannabis legalization since high school. He obtained a degree in Political Theory and Constitutional Democracy before moving to Vancouver in 2002. There he completed his Masters thesis on the “Malmo-Levine case” […]