Deprecated: The $control_id argument is deprecated since version 3.5.0! in /home/oq5ayjaeetjt/public_html/wp-content/plugins/elementor/modules/dev-tools/deprecation.php on line 304
 Lisa 'MamaKind' Kirkman Versus Alberta - Cannabis Digest
Skip to content 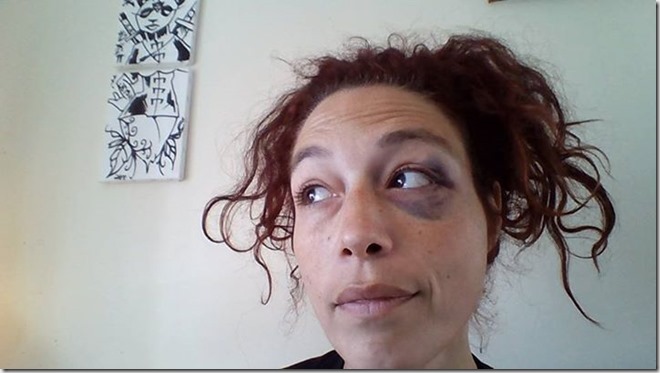 Lisa Mamakind Kirkman’s Battles in the Badlands of Alberta

If you think this story is about the famous sexpot goddess, activist, writer, caregiver, overgrower, and icon in the war to free the weed, Mamakind, you’re wrong.  This is about Lisa Kirkman, a woman, a mom, a partner, and a patient who is fighting a debilitating illness while trying to raise and care for her family.

Lisa Kirkman, like so many Canadians in this country, has had her difficult, life threatening illnesses made more difficult by the negative and intolerant attitude of both federal and provincial governments in Canada toward using medical marijuana.  Canada has a health care system often touted as an example to the world.  Despite this fact, it’s hard to be a medical marijuana user in this country.

This story is about people’s basic human rights to determine their own course of treatment and care.  It is about their being allowed to choose the best medicines, and how those medicines are administered to relieve and cure whatever ails them.

Lisa Kirkman is made up of all the powerful sexy brave activist stuff that gives life to Mamakind, former editor and sex columnist at Skunk magazine, and a force in the war against prohibition.  Still, at the end of the day, she is just like so many sick people in this country who are not famous, but find themselves unwillingly entangled in a needless and expensive struggle with Canadian health authorities over their basic right to survive and thrive. 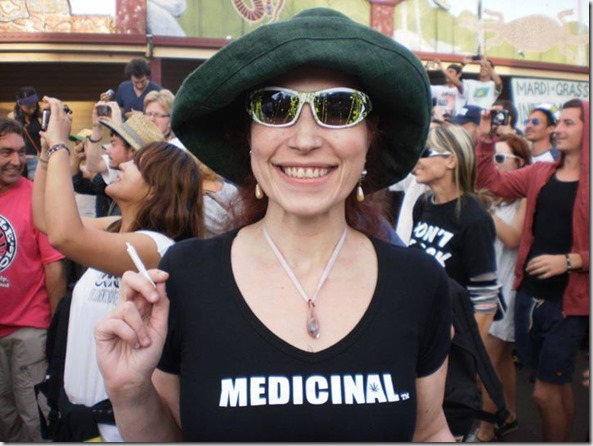 Imagine getting really sick one night as a result of an ongoing, increasingly serious illness.  You feel you need immediate medical attention, as you have had in the past.  So you make your way to your local emergency ward.  You expect to receive the same compassionate care and attention any Canadian would get from health care professionals who have taken the Hippocratic Oath, and work in our national health care system.  But when you arrive, the hospitals officials won’t let you in.  They turn you away because the physician-approved method by which you use your medicine has been unofficially labelled a dangerous risk to anyone around you.

This denial of health services is not based on a law or policy.  In fact, all the laws and policies are on Lisa’s side.  The denial is based on an ignorant mindset that generated a memo from Alberta health officials to all AHS supported care facilities.  The memo effectively bans vaporization of cannabinoid medicines, and ensures that Lisa Kirkman cannot get medical care anywhere in Alberta.

This is a horrifying scene, one you would expect from a for profit hospital in the US.   A Canadian citizen turned away from a Canadian hospital for any reason is unheard of in our socialized medical system.  The system may be flawed and crippled by lack of funding, but it is not known for a lack of compassion and outright discrimination.

Lisa has been licensed medical marijuana user since 2009.   She has severe osteoarthritis and, because of a gastric bypass, is unable to medicate by mouth with opiates or other pain medications.  Thus, Lisa has been vaporizing cannabis medicines with the full support of her doctors.  She is in constant pain.  Until March 2014 and the infamous memo from by AHS, she was vaporizing in the hospital as she needed to with support of her doctors and nurses. 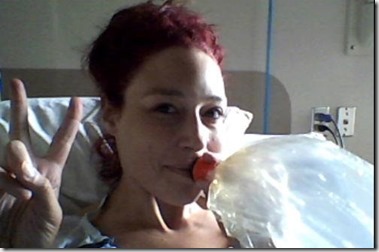 This situation is odd and confusing because AHS agrees that use of Lisa’s medicine is permitted by her federal licence.  The Volcano vaporizer she uses has been inspected by AHS and approved as safe.  She has the full support of her medical team.  There is currently no AHS policy in place banning the use of the vaporizer as medical equipment in AHS facilities.  There is only a memo from an AHS official approving the use of vaporisers in negative pressure rooms only.

Most major hospitals in our country have a few negative pressure rooms to accommodate patients who have communicable diseases or need a specialized environment.  But smaller or older hospitals and some emergency care facilities lack these special rooms.  The AHS memo on vaporizers does not take into account the number of negative pressure rooms in Calgary hospitals or their availability at any one time. Nor does it offer alternatives for Lisa should those rooms be unavailable when the ambulance arrives with her in medical crisis.  So hospital officials have opted to follow the spirit of the memo and send her away without care.  Calgary ambulance services won’t come anymore because of the liability of being stuck with a gravely ill person turned away without alternatives.  Systematic cancellation of her medical and counselling appointments followed, all because of a lack of the negative pressure rooms as required by the memo.

Cut off from medical care and too sick to work, she is not even able to apply for Alberta or CPP disability support; she cannot be examined and tested to compile the necessary information need to complete the applications.  With her illness becoming worse, and after failing to reach an agreement with AHS herself, she had no alternative but to file a complaint with the Alberta Human Rights Commission, citing AHS for denying her the use of a federally licenced and physician approved medicine. 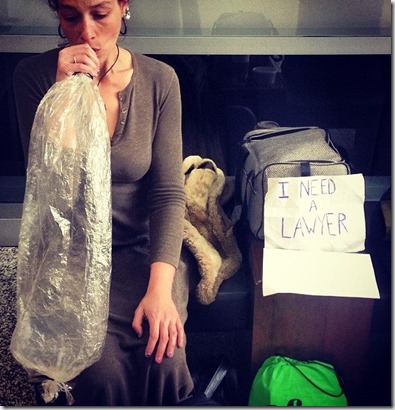 Penniless, arguably in the most discriminatory, anti-pot province in the country, and without the support of a local compassion club or the thousands of  fans, pot friends and connections Mamakind had enjoyed during her career, she made her way to the Calgary courthouse armed with her trusty Volcano and a sign that read, “I need a lawyer” taped to the front.

AHS has defended its barbaric position to the Human Rights Commission in a 200 page document.  AHS claims complaints by the nurse’s union about the smell.  It makes the unfounded assertion that second hand vaporization is a risk to staff and patients.  Finally, it cites an Alberta workplace heath and safety directive banning workers from entering a patient’s home where vaporization has taken place within the prior three hours.

After many months and arguments presented to the commission by Lisa herself, the decision came down in her favour with an official statement from the Alberta Human Rights Commission that AHS was indeed guilty of denying her basic human right to goods and services by preventing use of her federally licenced and physician-approved medicine.  AHS has asked for an extension until summer 2014 to reply to the finding.  Meanwhile there is no medical care or financial support for Lisa or her family in Alberta.

But this is unlike a criminal or civil trial.  A finding of guilt from the Human Rights Commission takes years to arrive at a point of actually applying penalties to any guilty person, company or government agency.  The eventual outcome will surely benefit Lisa and countless other medical marijuana users by preventing provincial health agencies from writing policies banning vaporization in the future.  However, without care she does not have the luxury of years to wait.

Trapped in limbo and on the advice of supportive Calgary police officers, Lisa filed a civil court case seeking a judicial injunction against AHS to stop them denying her medical treatment.  The simple question before the court is: What is keeping Lisa from care in AHS facilities if all policies and laws support her position?

A civil trial is relatively quick when compared to the Human Rights Commission process.  It would immediately force AHS to allow Lisa to receive medical care like any other resident of Alberta. 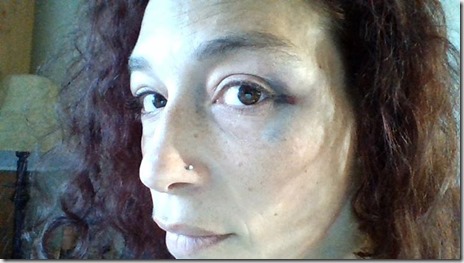 In July 2014  Lisa found the legal support she needed in the Calgary law firm, Parlee MacLaws.  They are representing her pro bono in the civil case and advising on the human rights case.  AHS has countered with a motion to throw out the civil trial claiming that the matter is already being tried by the Alberta Human Rights Commission and she cannot run similar cases in two courts. The judge has since ordered a meeting to hear arguments in special chambers in March 2015 regarding this AHS assertion.

Stalled by the courts, denied by AHS, sicker and poorer each day, Lisa is caught with little support.  She is yet another victim of prohibition in an unnecessarily slow and cruel legal race.  This race against the pace of the legal system may prove so lengthy as to outlast the time she has left to live.

Ironically, the woman who spoke to the world’s potheads about amazing strains of marijuana from the pages of Skunk Magazine has no access to affordable quality medicine, and survives on donations of old shake and the occasional black market purchase while she waits to enjoy what has already been determined to be her right.  She fears that AHS will extend its discrimination to her son who also suffers from a disease that requires vaporization as treatment.  Multiple court appearances and constant conflict, coupled with the denial of care are taking their toll on Lisa.   They add to her illness and create undue stress for her and her family.  Her “fund me” site has seen little to no donations as she has refused to reach out with a direct appeal for funds to her Mamakind fan base, even though fans would surely rally to support her.

Lisa chooses to fight her fight as an average Canadian, not the pot icon she has carefully created.  Using the tools of protest she has learned from the movement, and a backbone of steel inherited from her ancestors, Lisa Kirkman fights for us all in one of the many quiet battles in the war on marijuana ignorance and prohibition in Canada.

I Wouldn’t Call Them Budtenders – If I Had My Way

Judith Stamps A glance online will tell you that it is too late to eliminate the term ‘budtender’ from the cannabis industry. Definitions are offered in Urban Dictionary, Wiktionary, the Marijuana Glossary, and Merriam Webster. Budtender is a blend of ‘bud’ and ‘bartender.’ The budtender, one reads, is: “the first person that one sees at […]