Deprecated: The $control_id argument is deprecated since version 3.5.0! in /home/oq5ayjaeetjt/public_html/wp-content/plugins/elementor/modules/dev-tools/deprecation.php on line 304
 My Four Years at the Victoria Cannabis Buyers Club - Cannabis Digest
Skip to content

On June 6th, 2012, Ted Smith asked me to come into the Cannabis Buyers Club of Canada.  I had been asking Ted to hire me for half a decade.  Every year on April 20th, I would bring him my latest cannabis infused creation.  I would offer him muffins, cookies, brownies, or vegetarian pot-pie that I had baked, and ask him again if he needed anymore bakers for the cannabis dispensary he ran. It was a job that I wanted more than any other because I knew there would be none other like it, and this would be a career that allowed me to uphold my principles.

When I got to the club Ted lit a joint the size of somebody’s finger and passed it to me while explaining the job opportunity.  Everyone who worked there made the same wage, which was two dollars per hour more than I was making at my job the time.  Ted then told me about the benefits package, which included half of dental and medical bills, paid breaks, three weeks annual vacation, and an education fund to send staff members back to school. The shifts are nine and a half hours long; I got to do two days in the bakery and two days in the club every week.  The point of having me work both places was that I could learn as much as possible about the operation.  Ted also told me about the risks of being arrested or robbed, but I had already made up my mind and accepted the job offer.

The bakery was just a kitchen in the basement suite of a residential home but it was a nicer kitchen than what I had at my house.  I took to memorizing the recipes of cookies and budda balls to try and produce as much as I could in the day.  Most of the time there was only one baker on shift to produce the cannabis infused edibles and topical medicines for thousands of patients.  I checked the bakery log, and tried to match the workload of the bakers before me.  Some days were almost entirely spent filling vegetable capsules with infused oils like Ryanol or Cannoil.  My favorite thing to do was to bake cookies, but I also enjoyed making salves, and infusing different herbs into various oils.  I had spent four months at the Pacific Rim College in the Community Herbalist Program, so I would end up bringing in my own supplies, and stay at work late so I could try and develop new products.

My first job at the club was as a cannabis distributor.  Working at the bakery helped me be able to explain all the bakery’s products to the patients who wanted to use them.  Working at the club helped me to understand for whom I was making the medicine.  At first I was mostly dealing with strangers, but these people became more familiar to me as the days passed.  In time, I came to know many of their names, what type of illness they were dealing with, and what their favorite type of cannabis was.  They shared their stories with me, and although I received unkind words from some, I came to regard many patients as my friends.  I really enjoyed talking to people and trying to figure out the best way to help them.  I learned more about illness and medicine than I did at any school.

After awhile I was privileged enough to work at front desk reception.  It was important to help people feel welcome, but also to provide security for the staff and patients dwelling within.  At the front desk there was more time to talk about what was going on in the world, and in people’s lives, because most people were more concerned about making a purchase while talking to the distributors. There were a lot of questions to answer in person and on the telephone about what we were doing and how illegal it was.  I also took on the role of secretary at the monthly staff meetings, keeping notes for those who were absent. 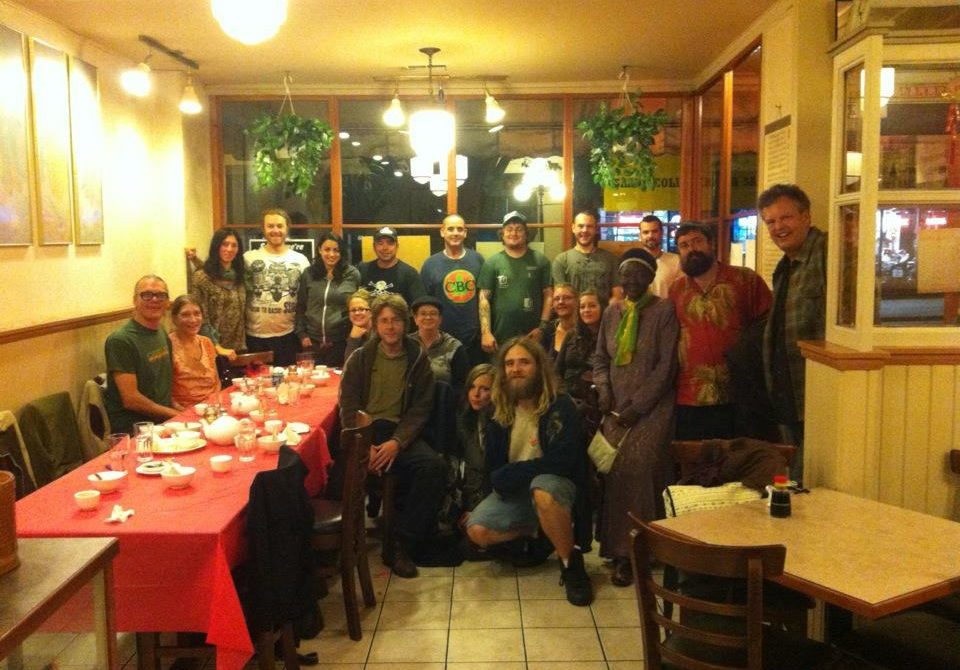 It wasn’t long before I was asked to give the initial orientation and consultation to new patients.  Each new member of the Cannabis Buyers Club must speak with one of the staff about the terms and conditions of membership, the pharmacology of cannabis as a medicine, and the effects of the club’s various products.  Sometimes people would want us to visit them in their homes or call on the telephone.  All sorts of people signed up to the club with many different types of illness.  Many people reported only resorting to cannabis because their doctors told them there was nothing more they could do for them.  We always encouraged patients to work with their doctors as much as possible.  Now there are a lot of doctors who are sending their patients to us with recommendations for our specific products.

In October of 2012, Ted had to sell the club to the newly formed non-profit society, the Victoria Cannabis Buyers Club.  The Canada Revenue Agency heard how much product the Cannabis Buyers Club sold every month, and demanded their cut for sixteen years of back taxes, forcing Ted into bankruptcy.  From that point on, all sales at the VCBC were tracked and taxed.  Many of the club’s patients can barely afford their medicine but Harmonized Sales Tax called for 12% to be added onto every one of their purchases of cannabis medicine.  The HST was abolished, and the provincial government recognized cannabis as a medicinal product and decided not to tax it, but the federal government still demanded 5% GST.

On March 31, 2014, the Marijuana for Medical Purposes Regulations replaced the Medical Marihuana Access Regulations.  The MMAR had granted patients who were approved by Health Canada the right to grow their own cannabis or designate a grower to provide it for them, but the MMPR currently restricts the patients’ access of cannabis to corporate mail order businesses that have received a license from the government to produce cannabis.  Additionally, the new licensed producers were not allowed to provide any type of extracted cannabis medicine, meaning patients were restricted to buying only dried cannabis which they would be forced to consume either by smoking it, vaporizing it or eating it plain.  Anyone extracting the medicine from cannabis or infusing it into oils was considered to be breaking the law.

In June of 2015, six years after Owen Smith was arrested for infusing cannabis into butter for the Cannabis Buyers Club’s cookies, the Supreme Court of Canada ruled that patients authorized to use cannabis under the MMAR or MMPR would be allowed to make cannabis extracts or infuse their cannabis into other solvents like oils or alcohol.  Because many patients would not be capable of eating as much raw cannabis as they required, clean cannabis extracts became highly sought after.  Licensed producers were still unable to provide edible, topical or extracted cannabis medicine to their customers, so the Victoria Cannabis Buyers Club began mailing all its products, except for dried cannabis, to its members across Canada.

The victory of Owen Smith’s cookie trial brought a lot of publicity to the club.  People across Canada were calling us, and writing emails to find out how they could get medicine shipped to them.  We started consulting with new patients over the phone, and many came into town just to join the club.  We were averaging about one new member per day.  Other dispensaries were opening up all over town, but people still came to us to get educated about cannabis, and we were always happy to oblige.

At the end of January 2016, the membership of the Victoria Cannabis Buyers Club elected me to serve a two-year term on its board of directors.  I had taken on a lot of the workload from my predecessors, such as doing payroll and some other accounting.  I also now help manage the Victoria Cannabis Buyers Club; only a couple co-workers remain who were there before me.  I consider it an honor to have served the community with so many who I regard as heroes in their own right, and I will continue to strive to protect their legacy.

Over four years have passed since I started my career at the Victoria Cannabis Buyers Club, and it is still the best job I’ve ever had.  There have been numerous opportunities to learn new tasks and skills that benefit the organization and community.  Victoria’s City Council has been listening to the pleas of our patients, and looking to the Cannabis Buyers Club for advice on regulating cannabis dispensaries in town.  Patients and their caregivers often come in to follow up and tell us how well they are doing, and how well the medicine is working for them.  At the end of every shift, I think about the people we’ve managed to help.  I feel that the law preventing me from providing cannabis to these patients is unjust, and that I will proudly continue to break that law until justice finally prevails.

This article previously appeared at Absolute Underground Interview with Ted Smith Who are are we talking to today and what are you best known for? Ted Smith  Founder of the oldest medical dispensary in the world, the Victoria Cannabis Buyers Club, author of HEMPOLOGY 101: THE HISTORY AND USES OF CANNABIS SATIVA, publisher of the […]