Deprecated: The $control_id argument is deprecated since version 3.5.0! in /home/oq5ayjaeetjt/public_html/wp-content/plugins/elementor/modules/dev-tools/deprecation.php on line 304
 The Herb of Life – A Cannabis Fantasy Adventure - Cannabis Digest
Skip to content

While challenging the Canadian Cannabis laws to legalize extracts for medical patients, Owen has written his experience into an action packed fantasy adventure. Not satisfied with making history by bringing the first ever medical cannabis case to the Supreme Court of Canada, Owen seeks to make a mythology where cannabis is re-instated as a sacred spiritual ally.

Rhyme your way through the 1st chapter of 13 chapters of this epic story, laden with lessons about how and why Cannabis can be considered The Herb of Life. 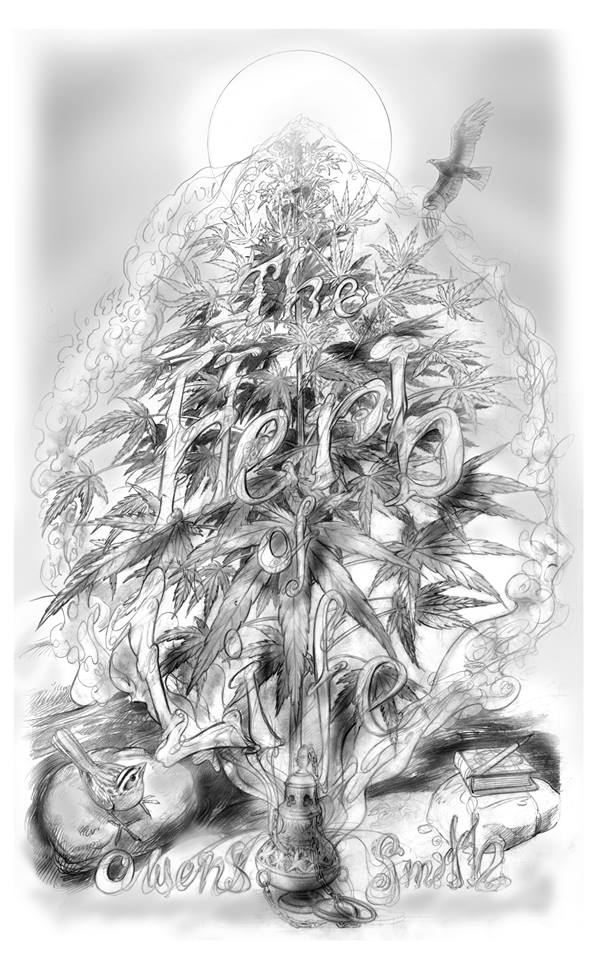 Believed to be seen in a lush green valley,
in the shadow of a mountain, in a kingdom by the sea,
was a boy on a farm with his small family,
who were known to sell a certain kind of seed.

But while bringing him a brother, the boys’ mother died
and his father, who loved her, was not far behind
and the sons were left under their grandmothers’ care,
a crone with high cheekbones and silvery hair.

She taught them to tend to the herbs and to render
the old medicines that so few now remember,
with the simplest of implements and a glimmer in her eye,
she’d dry the plants flowers and shake off a fine
powder, which was light and fluffy and allowed
her to dissolve into her bowl a very small amount
that she´d make into brownies and take around
to the hospital and all the sick people she found.

Like someone in pain, needing sleep or appetite,
with sore bones or glaucoma, to stop them going blind,
for skin irritations or migraine headaches,
or for people who uncontrollably shake:
her herbal remedies were beyond compare,
prepared with such attention to detail and care.

She´d also use the stalks of the herb to make ropes
and wove it as baskets and spun as clothes.
While her fortune was little, she would make the most
of this true Herb of Life, whose seeds she would roast
or press to make cakes, or squeeze for oil,
keeping secret its name for fear it would spoil
men’s hearts, who when governed by fear and greed
would steal for a flower, or kill for a seed.

As the boys grew they too mastered these arts
and created the tools that they´d need for the plants,
to separate the resins just like their grandmother
and make medicines like no other.

(The complete book is scheduled for release in 2015
Stay Tuned to www.CannabisDigest.ca for more info.)

A Word to the Cannabis Medicine Makers: My Talk to the Vancouver Island Chapter of Women Grow Judith Stamps Much is heard today about the practice of networking. Business and tech magazines encourage us to network. Networking helps us to find useful associates and ways to boost our products in the marketplace. If we wish […]

We have dedicated this issue of the Cannabis Digest to the inspiration of our publication: Gayle Quin.  My love died peacefully in her home on Thursday September 22, 2016 after a long battle with cancer.  Long before we were partners she convinced me to start a newsletter to inform the members of the Victoria Cannabis […]

Michael Geoghegan Ontario Premier Kathleen Wynn has made no secret of the fact she wants marijuana in Ontario sold exclusively through government liquor stores, or the LCBO (Liquor Control Board of Ontario) as they are known there, when the Trudeau government gets around to legalizing weed next year. As the Toronto Star reported a a […]