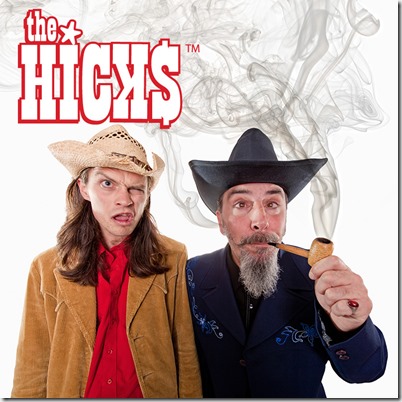 They’re rude, crude, funny, and shocking—so offensive that the plug was pulled during a gig at a local gay bar. And they are proud of that. They are The Hicks, and indeed they are.

Some folks just don’t enjoy satire on this level, and take it too much at face value, in which case The Hicks just ain’t for y’all! But for all those Trailer Park loving, bong-hitting, fun-loving jesters, spin up a cannon and get ready for a session of gut-busting laughter. They are, indeed, the Cheech and Chong of country music (not to be confused with new country).

But, hidden amongst the hilarious songs and skits is a keen social and political awareness. “Father Mahoney” looks at some dirty deeds in the Catholic Church, “A Marijuana Party” skit looks at the BC Marijuana Party and the politics around the Marc Emery extradition, and the lunacy of our drug laws threads itself throughout their repertoire.

the HICKS – The Good Ol’ BC Smoke

And for a bunch of hillbillies, they can sure play their instruments, and impress even die-hard bluegrass fans.

The only thing I just don’t get about these guys is that they aren’t famous. The Hicks belong in the record collection of all cannabis aficionados.

They have two albums out now, available at <www.thehickstv.com>, and you can take a quick listen to them on their myspace page www.myspace.com/thehickstv

They are also planning a TV show, among countless ideas constantly dreamed up during work “sessions.” What I’d love to see is a Hicks meet the Freak Brothers comic book!

To get the true sense of The Hicks, you need to see them live. They will surely be performing some gigs in support of their second album TOO, so check them out when they burn one through your town.