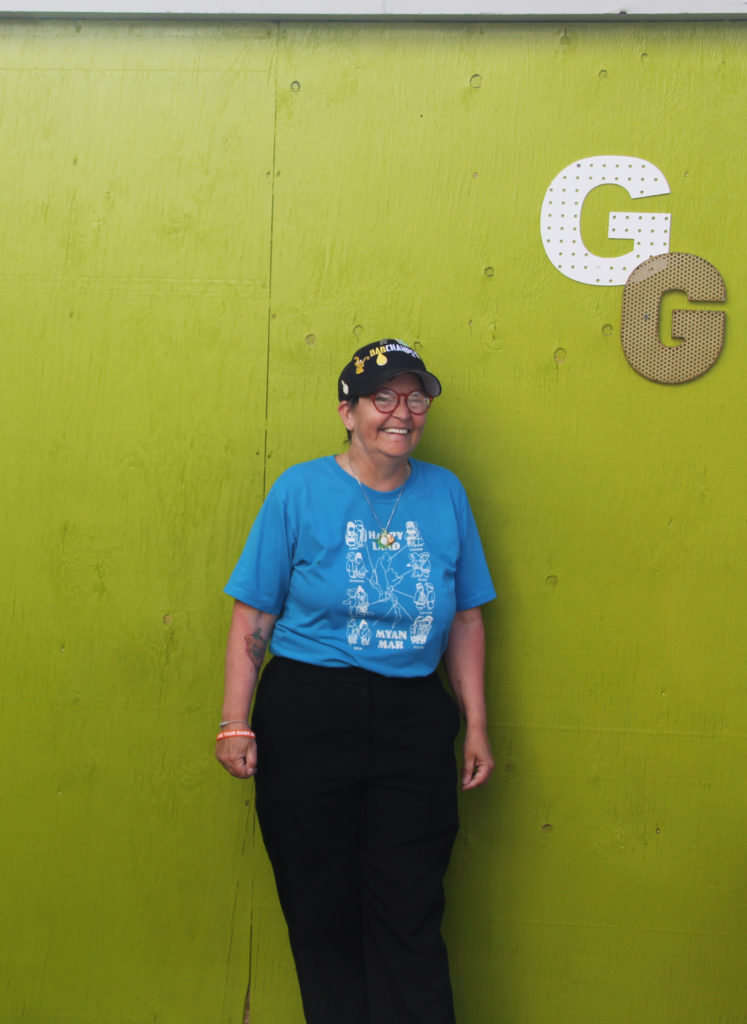 As I wait at The Green Garage dispensary for Majick, another person arrives to meet her to whom she’s promised to split a 2-for-1 ice-cream voucher after her interview.

Behind her cartoonish internet persona is Majick’s deep commitment to her Victoria community, her home for over fifty years. Majick bounces in with a manila folder brimming with clippings, a pastiche of her life achievements, “Thank you for making me put this all together” she smiles.

In the folder are two panel discussion invitations from the Capital Mental Health Association, her article published in Islander, and a newspaper profile on Majick’s life on the streets.

“Prior to 88’ and 89’, I was a mess. When I was in my thirties I had a lot of mental health issues,” said Majick, reeling off a list, “I was young to know what I knew. I saw stuff and did stuff that other people didn’t. I only worked this out in my forties. I didn’t know there was a wrong side of the tracks here in Victoria,”

Majick paints her early life as filled with trauma, chaos and instability punctuated with colourful adventures. “I’m not one of those island people who never leave,” Majick says with a laugh. “I hitchhiked across Canada three or four times but always came back because this is my home”. 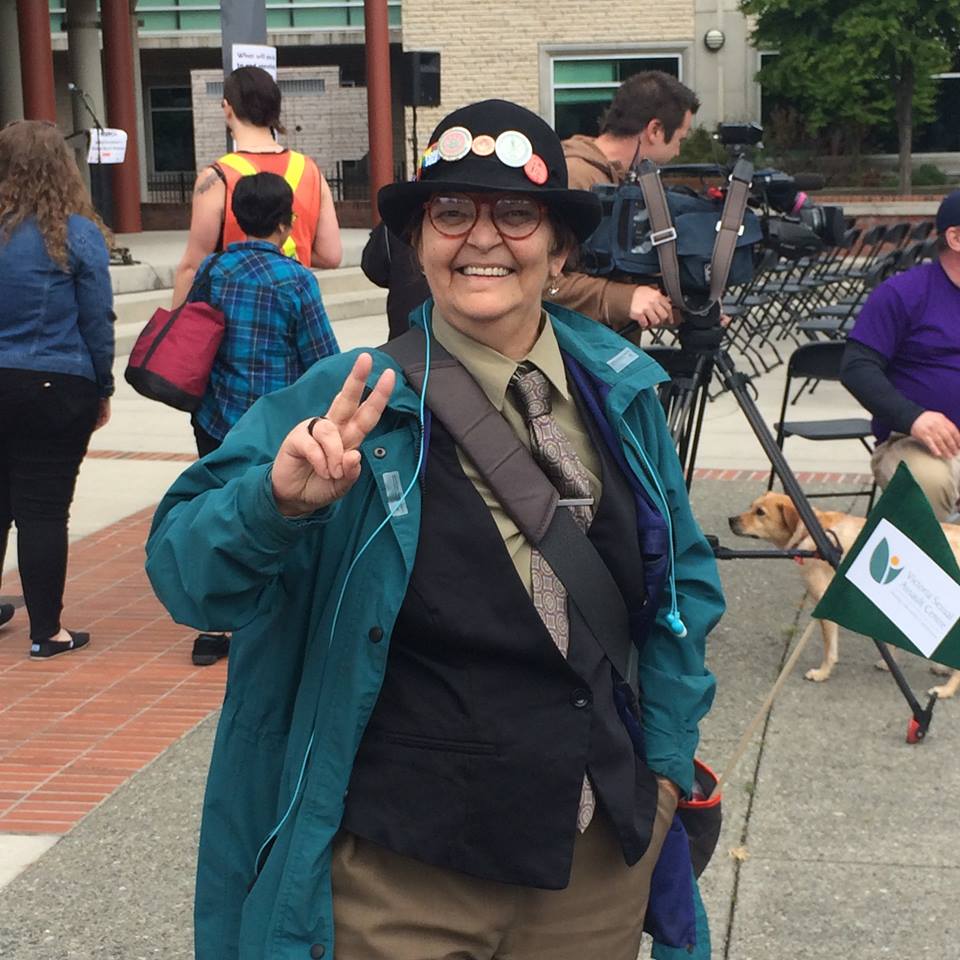 From age 30, Majick’s life began to take shape, and her cannabis activism was an integral part of this journey. “By the time Ted [Smith] recruited me about five years for the Board of Directors for the Victoria Cannabis Buyers Club I had started to really come out of my shell.”

“I don’t know what it is but every birthday that ends in ‘0’ is big for me,” said Majick, “At 30 I went back to school. I never got a degree out of there but I got what I wanted – the social skills. At 50 applied at the Royal British Columbia Museum where I still volunteer to this day”.

Throughout her hardships, Majick displayed an ability to turn tragedy into positivity; when her cousin was killed at a young age by a car accident, Majick took to the streets to offer free hugs.
Embracing strangers was a marked transition from being house-bound by agoraphobia, “I once lived invisibly… My dealer would come over and I’d do his laundry in exchange for cannabis.”
After “a shitload of fucking therapy” Majick now enjoys a very public life by posting 420-related content online that has attracted sponsorship deals and almost 10,000 Instagram followers.

“My first post was in 2014. My niece talked me into it. About seven months in I had about 300 or so followers until I got a message from a woman called Gail, the American ‘Dabbing Granny’ that said, ‘I gave you a shout out miss. Be prepared for some new followers’. It started jumping up by hundreds and hundreds immediately.” 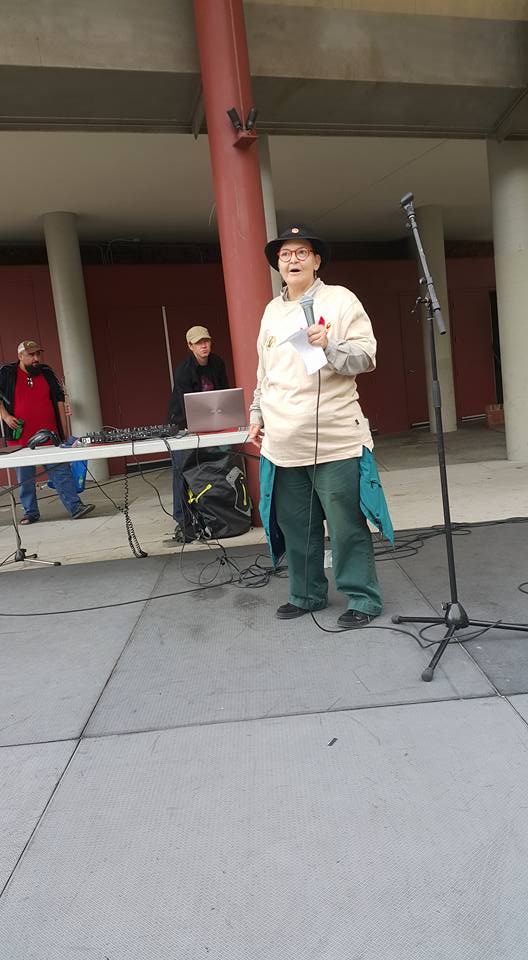 Finding internet fame through cannabis puzzles Majick who remembers a time, not more than five years ago, when “covert dabbing operations” where hosted in the back of closed restaurants.

For decades, Sterling has battled with the legalities and stigmatization from her cannabis use.

“I was in Grade 6, around the age of 10 or 11, when I was introduced to cannabis and I’ve used it off and on for the rest of my life but the system has always made me feel guilty for it. I spent 10 years in NA [Narcotics Anonymous] for what I thought was cannabis addiction, and I always ended up on psychiatric medication.”

Now, Majick considers herself drug-free, “I don’t get high off cannabis. I believe the reason I don’t feel ‘high’ is that I need all of the properties in the leaf and when I use it, it’s going to where it’s needed. So I can talk to you. So I don’t feel so much pain. That’s just my personal theory”.

Majick is excited for the future speaking candidly about her desire to travel, represent quality cannabis brands and continue manifesting ideas which she credits with bringing joy into her life.

“I’ll tell you what I want. I want to change the world – as my Instagram says, one smile, one hug and one high five at time”.

HOW TO CREATE AN IMMERSIVE STONER DINING EXPERIENCE AT HOME