Deprecated: The $control_id argument is deprecated since version 3.5.0! in /home/oq5ayjaeetjt/public_html/wp-content/plugins/elementor/modules/dev-tools/deprecation.php on line 304
 Pottawa: Ottawa Becomes Cooler Than Ever - Cannabis Digest
Skip to content

I sometimes think that if Earth ever joined some sort of Galactic Federation, Ottawa would be known throughout the galaxy – not just the world – as the lamest place to visit. Name anything from public transit to entertainment to City Council, and if you don’t find yourself getting bored or angry, you’ll be rolling your eyes with embarrassment. Ottawa is where you bring your kids for a vacation when they have been brats all year. 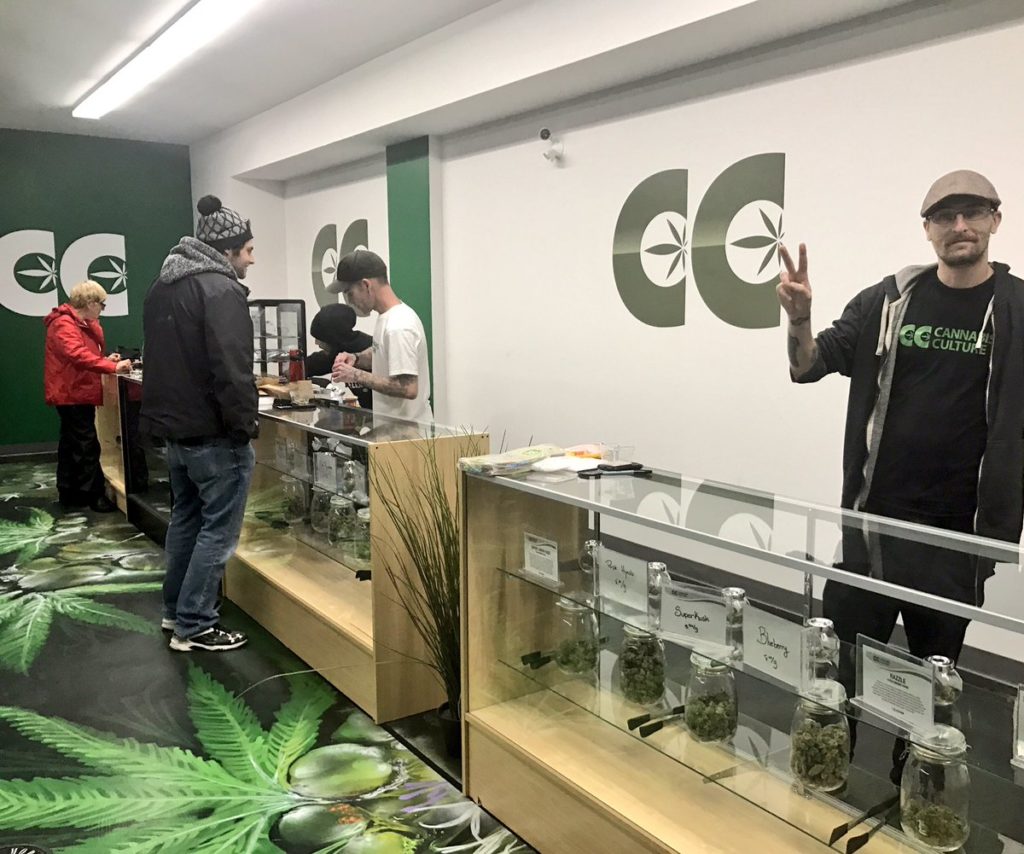 But this is not the case with the Nation’s Capital’s first no-prescription-required cannabis dispensary. Although the establishment is called Cannabis Culture, and bears the logo of the Marc-Emery-started franchise, Chief Budtender Ming Saad made it clear that the store currently has no affiliation with Marc Emery, professionally or otherwise.

In light of Emery’s recent controversial remarks about Trans people – comments that all but a few considered transphobic hate speech, for which he later apologized – Saad felt it was important to distance the store publicly from the Emerys. CC Ottawa sits in the heart of Ottawa’s gay village, so Saad worried that there might be some backlash from the public. So far, there has been none.

Although the store was raided by Ottawa Police on March 9, just two weeks after it opened, and 5 people were charged, they managed to have the doors re-opened and the shelves re-stocked in under 23 hrs. The Ottawa raid happened the day after the raids that closed other Cannabis Culture stores in Toronto and Hamilton, but was not actually part of that larger operation. Subsequently, the arrestees were not saddled with the same sorts of wildly onerous bail conditions that the Emerys, Britney Guerra in Hamilton, and Chris and Erin Goodwin were dealing with. 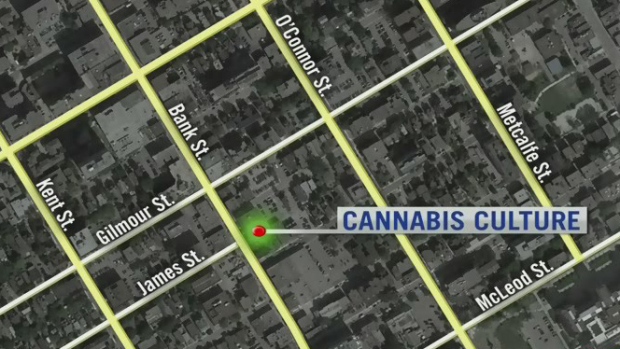 The store is located at 391 Bank Street, open 7 days a week from 10am to 10pm, and Saad estimates an average of 800 – 1000 customers per day, amounting to about $30,000 worth of business. And yes, they pay their taxes. All of them. The store operates as if pot were already legal, holding their establishment, themselves, their volunteers, and their products to the highest standards. This is not a fly-by-night outfit. This is taking root.

My wife and I visited for the first time in June, and were very pleased with what we saw: a wide variety of cannabis products being served up by friendly, energetic and informed budtenders. Customers wait outside in a waiting area, and then are buzzed into the back room. That room has a line of people up waiting for their turn, but the crowd is small and quick-moving. It is how pot-buying should be.

For Mike Foster, owner of Crosstown Traffic (the oldest and longest-running head shop in the area), it is a welcome and long-awaited change. “It is an important effort and I am happy to see it. It shows cannabis sales the way that it should be done, open and accessible to the public. The over-regulation being proposed by the government is not necessary. Many decades of cannabis being relegated to the black market did not lead to a single cannabis death. Compare that to the days of alcohol prohibition and the massive poisonings that ensued before legalization. The government keeps trying to draw parallels between the two but there really aren’t any.” 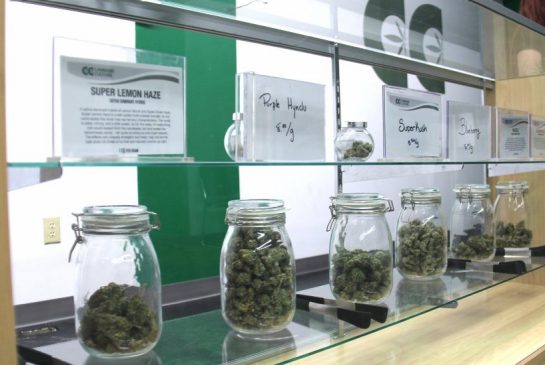 Customers agree. In mid-June when a friend who I have known for 39 years called and asked if I knew where to get a certain strain of pot that helps with his back, I suggested Cannabis Culture, not only because I know Saad and many of the other people who work there, and that they are good people, but because they have a wide selection of top-shelf product coming from medical-grade growers.

He told me later that not only did he get the strain he was looking for, he also had a wonderful experience purchasing it, meeting tourists from France who were as astonished as he was.
What the future holds for CC Ottawa is anyone’s guess, but according to Saad, the proprietors plan to dig in their heels and fight until the bitter end, with a plan to challenge the law all the way to the Supreme Court Of Canada if necessary. More locations, though they might not be called Cannabis Culture, are in the works, not only from the people who own and operate CC Ottawa, but from other people who realize that Ottawa can support more than one cannabis dispensary.

Many in the legalization-activism community worry that the Liberal government’s Prohibition 2.0 Cannabis Act won’t allow for mom-and-pop cannabis dispensaries like Cannabis Culture, but just as many suspect the bill won’t pass at all and was never designed to. Personally, I think it will be scuttled by the Tory-stacked Senate. If the wild-eyed gobbledegook spewed in The House Of Commons by the likes of Rob Nicholson and Marilyn Gladu recently is any indication of what the tories think of the whole idea, we can be pretty sure that this bill will not pass the Senate.

That leaves the market wide open for the next three to four years at least. Recent reports show that Canadians used over 635,000 kilos of cannabis last year, 87,000 kilos of which came from the ACMPR producers. The LPs would have to grow in number, grow in size, and produce eight times what they are producing now to replace the existing extra-regulatory cannabis market.

Cannabis dispensaries are creating jobs, and, in some cases, jobs for people who perhaps can’t get or hold down a regular job.

The host of this year’s 420 event on Parliament Hill, Alex Newcombe, for example was budtending the day that CC was raided, and he is still facing charges and dealing with bail conditions.

“It was a harrowing experience, but the real fun was recognizing the few cops in masks that had bought from us the few weeks prior…. You know they went home and enjoyed themselves….”
Newcombe lives with an anxiety disorder, that – paradoxically – was alleviated somewhat by working in the arrest-prone business of budtending.

Leanne Wilson, meanwhile, tends to the front door 6 days or more per week, a job which consists mainly of checking IDs and buzzing the door open for the next customers to enter the purchase room. “Volunteering at CC has been one of the best experiences I’ve had the pleasure to be involved in. We have a very close knit team, that often feels more like an extended family. It also helps that, on a daily basis, we are standing up and fighting for something we all believe in.” She said. “Not only is it wonderful knowing how many people we are helping every single day, but it also gives us an opportunity to be involved in our community where we don’t get judged by our choice of medicine. Many employers are unaware or unsympathetic to the needs of medical cannabis patients and therefore most of us have trouble fitting in to a standard working environment as we are unable to medicate during working hours. Volunteering at CC allows us to be productive members of society without bearing the stigma of our medical cannabis use.”

Everyone working at CC knows that, unlike many of the other dispensaries that have been raided and left their employees lawyer-less and with no financial backing, they have Kirk Tousaw in their corner, the legal equivalent of hiring The Hulk to move your furniture. Morale around the shop is, as one would expect, exceedingly high.

So, as lame as it has been, and as tedious as Ottawa can be, it really does keep getting cooler around here all the time.

This article previously appeared at Absolute Underground Interview with Ted Smith Who are are we talking to today and what are you best known for? Ted Smith  Founder of the oldest medical dispensary in the world, the Victoria Cannabis Buyers Club, author of HEMPOLOGY 101: THE HISTORY AND USES OF CANNABIS SATIVA, publisher of the […]

By Owen Smith When doctors talk about cannabis, many agree that although it’s a relatively harmless complex of chemicals, smoking it is an obvious problem. Medical cannabis patients know that the benefits of smoking are an instant relief of their symptoms, and the ability to regulate/titrate doses until their symptoms are relieved. Many patients know […]