There is an easy way to deliver substances to your plant leaves by capillary action. This can be done by bypassing the plants roots.

Much like a rose or other flower in a vase of water, cannabis can uptake fluids and actually remain “alive” if the freshly-cut stem is placed in an aqueous solution. The plant root system filters out large molecules, especially if the molecule is highly charged. If a flavoring-agent is placed in the soil, it will remain there, and not be taken up by the plant roots. This is because flavoring agents (flavanoids) are large, highly charged molecules. This results in the flavanoid remaining in the soil. The end result is that the flavoring agents act like a salt in the soil, and thus having osmotic properties, actually draws water from the plant back into the soil. This is a simplification but the end result is to dehydrate the plant and result in its death. I first realized this by killing a fine cannabis plant through placing root beer in the soil. It killed the plant and didn’t flavor it (foiled by the root membranes). I next reasoned that if a Christmas tree can be kept alive (for a while anyway) if placed in a solution of salts and sugars, then similar things should apply to cannabis plants. 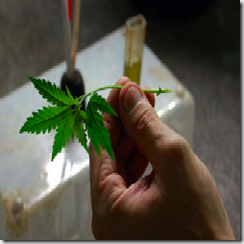 I took a mature, ready–to-harvest plant and cut it off with sharp pruning shears, and immediately placed the cut stem in a jar of Mexican Vanilla extract. I left the plant’s stem in the solution for about a week. After about 24 hours you could smell the vanilla in the colas, without the vanilla ever coming in contact with the bud. It took a while to dry out the cannabis after the RTM procedure was performed. When smoked, everyone loved the flavor and smell and it didn’t make anyone cough. The flavor is hard to describe and thus hard for people to identify, but everyone loved it.

The RTM procedure can be used in a number of different ways. Experimentation must be done to determine the optimum time the plant should be exposed to this procedure with different flavanoids. Possibilities are endless; you can dream up anything you like (Strawberry, Bubblegum, Beer, Maple, mint, or combinations of two or more substances.). No health studies have been done on adding any of these or other substances to a product that is to be smoked and consumed by humans. Flavoring agents do exist in tobacco products, however. Some may be proven safe in the future while others most certainly will have negative health consequences. This procedure may already be in use in some areas of the world, but to my knowledge has not been printed prior to this article. Additionally, this mechanism may be done to flush plants with plain water if needed, to diminish nitrogen harshness on the smoke.

Other important application of the RTM procedure would be to present to the plants THC PRECURSORS. By placing the live plant, almost ready to harvest, in a solution of Terpenes or Phenols, it would have ready-formed THC precursors for the marvelous metabolic machinery of the cannabis plant to work on. The end result could be that any strain of cannabis could be made super concentrated with THC in this manner.

This technique could also hold promise in the future by allowing researchers to combine known medications with the cannabis plant. Steroids, Bronchodilators, Antibiotics and other medical substances could be delivered to the live plant. Obviously, while no real research has been done towards the safety of doing alterations to the cannabis plants, and I suspect most consumable organic substances would pose little risk, this remains to be proven.

This could be applied to other plants as well. The possibilities are endless.

We need to end the virtual ban on cannabis research. If a qualified person can obtain a license to handle automatic weapons, explosives or other dangerous substances, then a properly-credentialed person should be able to do handle and study this so-called “dangerous drug “ called cannabis.

(Read the Extended and Detailed breakdown of this process by Dr. Allen)