Deprecated: The $control_id argument is deprecated since version 3.5.0! in /home/oq5ayjaeetjt/public_html/wp-content/plugins/elementor/modules/dev-tools/deprecation.php on line 304
 Cannabis and the Federal Leadership Debates - Cannabis Digest
Skip to content 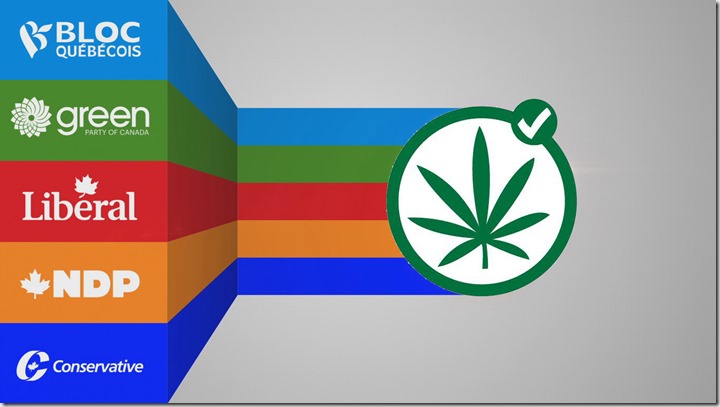 Last Thursday, August 6, 2015, the leaders of Canada’s four major political parties participated in a debate hosted by MacLean’s Magazine.  Canada has just entered its 42nd federal election campaign; the election is set for Monday, October 19.  It’s an important election for the cannabis community; patients hope for a better deal from Health Canada, and friends of cannabis hope to see the end of prohibition, or at least the beginning of the end.  Such debates can be frustrating for viewers, as leaders are compelled by the rules of public life to make grandiose claims, and short work of the facts.  Here’s what I learned from the MacLean’s experience.

Mr. Harper is a master of rhetoric and stage presence, a talent for which he is not, in my view, accorded sufficient credit.  On Thursday evening, he approached his podium encased in a serenity bubble from which he never exited.  Indeed, he gave every impression of being possessed by the spirit of the Tooth Fairy.  Rhetoric is the art of persuasion, in our times, most intensively studied by the advertising industry.  It comprises standard techniques.  Two of these, Harper’s favourites, are exaggeration and repetition.  Well combined, they’re powerful.

Here is Harper’s version.  MacLean’s moderator, political journalist, Paul Wells, asked questions on four general topics: the economy; energy and the environment; democracy; and national security.  To the first three, Harper, radiant, Mona Lisa smile at his service, offered the following.  On the economy:  Canada is ahead of all the other G-7 nations.  On energy: Governments do not build pipelines; industry does.  We’re going through a regulatory process, which is exactly what should be happening.  We’re completely on track.  On democracy: I tried senate reform, but got little co-operation from the provincial leaders; and Canadians are happy with having to present extra ID in order to vote in the upcoming election—a new rule.  He peppered these assertions with a pet phrase: Let’s be clear.  Thus his part of the debate went: (serene smile) Let’s be clear, the Canadian economy is second to none; (serene smile) Let’s be clear, all is well with our energy policy; (serene smile) Let’s be clear: Canadians like our rules.  In sum: (essence of calm) Let’s be clear: it’s six o’clock, and on my watch, all’s well.

This performance was made complete by Harper’s claims on security: Our government is the only one not afraid to call Jihadist philosophy the world’s greatest danger, and to take steps to protect Canadians from it.  So…the facts?  Canada ranks 3rd among G-7 nations for economic growth, and 5th, after Italy and Japan, on job creation.  The debate over piping bitumen has bogged down, maybe terminally, because there appears to be no safe way to pipe bitumen.  Senate reform never happened because Harper attempted to accomplish it without meeting with the premiers, and Canada’s constitution requires agreement by 2/3 of them.  Canadians are not happy about the new ID rules; the Council of Canadians has been trying to block their implementation.  The security claims cannot be demonstrated to be true or false. 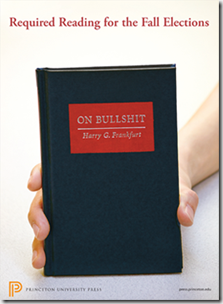 Recently I had the pleasure of reading Harry G. Frankfurt’s philosophical essay: On Bullshit.  Frankfurt distinguishes between lies and bullshit.  Liars, he observes, have their minds trained on the truth, and state its opposite.  Bullshit artists, by contrast, are not concerned with truth.  They choose their statements to create an impression of themselves in the mind of listeners.  If I tell you I was at home at 4 pm today, and I wasn’t, I’m lying.  If I’m standing at a podium bluffing my way through a talk on a subject about which I know little, or wish to reveal little, I’m bullshitting.  By these standards, the claims about Canada’s position vis-à-vis the G-7 were lies.  ‘Canada is doing great,’ ‘Canadians are happy,’ and ‘with me Canadians are all safe,’ delivered with saint-like tranquility, are just bullshit.  Likewise, the statements on the senate and pipelines are slippery, but fall short of lying.  Their purpose is to deliver an impression of competence, and of confidence.  Bullshit artists, as ones indifferent to the truth, in Frankfurt’s view, are greater enemies of truth than are liars.  Their indifference indicates either profound skepticism (there is no truth) or, I would add, a commitment to the politics of pure power (only weak-minded, liberal idiots tell the truth.)

So yes, the other participants called attention to the lies.  Canada, as they noted, is struggling through a recession.  It’s been said that Harper admitted as much.  He didn’t.  He made a mild gesture, serene as ever.  Justin Trudeau, Liberal leader, stated rightly that Canadians know that economic times are tough, and put forward his party’s commitment to help Canada’s middle class; Thomas Muclair, New Democrat leader, described his party’s commitment to affordable day care, and claimed to know how to bring Canada out of its recession; and Elizabeth May, Green Party leader, pointed to critical disparities in income among Canadians, and the need to address these.  Much was said about the need to meet with provincial premiers and leaders of First Nations, and about the erosion of democracy.  But frankly, ‘Canada’s doing great’ is a bit like ‘Sing a song of sixpence.’  It’s not a truth claim; it’s a nursery rhyme.  Well delivered, as it was, it’s almost charming—and precisely why Harper is a dangerous man.

Such issues aside, the MacLean’s debate was problematic in part because the questions were too general.  If you say, as Paul Wells did, Canada is said to be in a recession, what do you say to that? You will get general answers.  You invite participants to state their party lines, something the viewers could get by reading the parties’ brochures.  In this debate we heard far too little that seemed real.  A more pointed economic question would have been: Cities across Canada are struggling with the lack of affordable housing, the extreme form of which is increasing homelessness.  Whose responsibility is this, in your view, and what would your party do to address this issue?

What does all of the above bode for the cannabis issue?  Clearly, unless future debate hosts raise the subject, we should expect to hear nothing on it at this level.  We can and must, however, raise the subject at all candidates’ meetings.  We should also learn from this debate: to get clearer answers we need focused questions.  Of course there are no guarantees.  Candidates can always stick to parroting party lines.  But if they do so in response to focused questions, the bullshit is easier to see, and the discrepancy becomes obvious.  With these ideas in mind, I’ve started a list of focused cannabis questions.  Here are some to consider.

i) For Liberals:  Your party has stated it’s intention to legalize cannabis.  To what timeframe is your party willing to commit on this reform?

ii) For New Democrats, who have called for yet another government sponsored study:  What does your party think about earlier commission reports on cannabis (Indian Hemp Drugs Commission, Le Dain, Shafer, Wootton, Francis Young, Canadian Senate), unanimous in promoting decriminalization, but all shelved and forgotten as soon as they were presented?

Do you think we should continue to arrest Canadians for cannabis possession?  If not, how quickly will your party act to prevent these arrests?

SUGGESTIONS FROM OTHER ACTIVISTS, QUOTED VIA KIND PERMISSION

1. What changes will you make to the Medical Marijuana Regulations to remove the barriers patients currently experience in accessing cannabis medicines? And

2. To what time-scale will your party commit for these legislative changes?

iv) American activist, Dr. Mitch Earleywine, Chair of the Executive Board at NORML.

To all parties: What do you think is a fair penalty for owning a (cannabis) plant?
I like this question: it raises the subject of home gardens, without entirely seeming to.

Would you agree that patients should have cannabis medicine as their doctors see fit?  That is, in the forms and amounts that their doctors recommend?

To Liberals and maybe to New Democrats:  How do you propose to organize the distribution of medical cannabis?

Would you support the current dispensaries?

Are you thinking government stores?  Pharmacies?

To Liberals and the Green Party: what plans does your party have for cannabis distribution in general?

It’s a good idea to craft several of these every day.  We’ll need them.

Focused questions are equally useful at information tables as a starting point for conversations with the general public.  Sensible BC intends to do some ‘main street’ conversing of this sort.  We must join them.  At this point it is only a theory that we can encourage a larger public to come out and vote, and still another theory that, if we succeed, they will vote Harper out.  But as theories go, these are appealing.  Besides, if we succeed only in exposing bullshit, we’ll still be doing some good.  And that’s no theory.

Halifax club struggles after police raid By Debbie Stultz-Giffin We are endeavouring to feature one patient per province and territory this year as we share patients’ stories with the rest of the country. We will be focusing on patients who will live in fear of the repercussions of the looming MMPR, and how the loss […]

Ted Smith Anyone working in the illegal cannabis industry needs to be prepared to get arrested at any moment.  A recent rash of police raids on medical cannabis dispensaries across Canada have shown that some organizations are much more prepared than others to deal with the consequences.  Since the Victoria Cannabis Buyers Club survived 4 […]

Ted Smith For over 5 years, since having her right breast and part of her armpit removed full of cancer, Gayle Quin continues to survive in large part due to the healing properties of cannabis.  Though she has been using cannabis to deal with various medical issues since the age of 13, there is no […]