After over a decade of the Marijuana Medical Access Regulations, the persistent problems with the system have given the government the opportunity to justify taking the program in another direction. The new Marijuana for Medical Purposes Regulations throw patients under a big, fully licensed commercial bus.

Health Canada’s new medical cannabis regulations threaten the lives of patients by taking away their right to grow, and opening up the market in a completely new and different commercial system. Caught in between are dispensaries and caregivers, who have invested a lot of time and money developing the capacity to supply high-quality medicine. 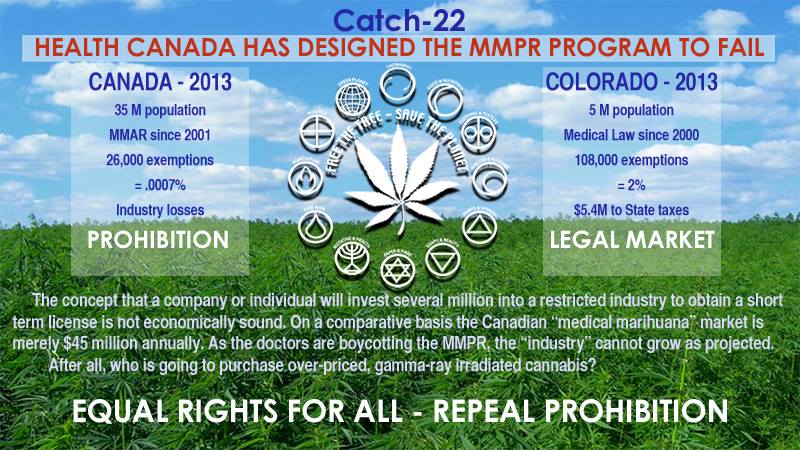 Instead of putting patients first, these changes are primarily meant to comply with police and fire officials upset at the problems being created by some growers under the current regime. Though many of these issues could have been avoided with proper inspections and other regulatory measures, the government has tried to step back from spending resources on the program, leaving patients and doctors at the mercy of a hungry crowd of cannabis entrepreneurs.

That is why on Oct. 1, we must get people out to their MPs’ offices. Patients need a chance to voice their anger at this new system, and they cannot do it alone. They need others to help put up posters, make signs, write letters or emails to media, get the word out, and assist others who have difficulty traveling. Even if you have to work when the rally is happening, there is a lot you can do for patients that day.

While we realize the message is likely falling on deaf ears, we need to put a friendly face in front of the staff of Conservative MPs so they can understand how much these new regulations are going to hurt patients. They need to see that they are ruining patients’ ability to look after themselves—patients who look no different than their own friends and family. Other MPs and their staff also need to have a chance to meet with actual patients. They need to be convinced to reinstate personal production licences for patients, at the very least.

These rallies across the country will be held the day Health Canada stops issuing licenses to grow. The last rallies in this series will be held on Apr. 1, 2014, the day the new regulations come fully into effect. On this day, Hempology 101 will also organize a large rally on the front steps of the federal government in Ottawa, in solidarity with local rallies at MP offices.

April Fool’s Day will be our last chance to raise awareness about the need for patients to grow their own medicine. From there, it turns to courts and politics.

While what is happening to patients is terrible, there are definitely improvements in how the government plans on making sure there is a stable, consistent supply of raw herb. The current program has forced Prairie Plant Systems, the government supplier of cannabis to patients, to produce low-grade herb, grind it up, and zap it with radiation. It also made the company sign a deal that forbade them from explaining to the public that these restrictions were due to their contract, not poor planning from the company. In fact, PPS is likely to be one of the first to get a new commercial producer’s license.

Many companies, some with very rich backers, appear poised to obtain these new licences even if they have to invest millions of dollars and lose money for years before turning a profit. The projected size of this market is huge, especially if patients have no legal alternative. Foreign companies are also eyeing up the changes, seeing an opportunity to expand.

Meanwhile, medical cannabis dispensaries are scrambling to see how, or if, they can fit into the new regulations. Since the MMPR do not allow for storefront operations, nor for the sale of extracts, the traditional model of a compassion club does not fit into the new rules. The human interaction that occurs when providing this medicine is very important to most patients, and the speed of service upon payment is critical for people with low incomes. For most people currently operating clubs, it is hard to imagine quitting just because there is a new legal system, if it means many patients will be forced back to the streets.

There is a possibility that provinces and territories could start to create their own dispensary systems, but that is not happening soon. For a time, Health Canada entertained the idea of allowing pharmacies to be included in these future programs, but they did not appear in the final regulations, leaving hospitals, doctors, and nurse practitioners as the only ones able to operate a storefront dispensary. While many have speculated that it will be possible to hire a doctor or NP, that plan seems to depend entirely upon cooperation from provincial health authorities—something that is not likely to happen any time soon.

Some clubs are considering legal models that have mail boxes near where patients make their orders, making for a system that is more time-consuming than the current one. Others imagine bonded couriers that appear at your home after you click a button, providing faster service than going to a club yourself. Since many clubs have exclusively used licenses under the MMAR to supply themselves, they feel they have no choice but to pursue a commercial license, and merge into the new system, even if it means sacrificing patient services. The threat of mandatory minimum sentences looms over everyone’s head.

Even if everything was done legally in this system, the sale of cannabis derivatives is still not allowed in the MMPR. For many patients, this is the only way they can ingest cannabis, as eating and topically applying it has a wide range of potential applications, and many are uncomfortable with the psychoactive effects generally associated with smoking. Though some patients are ready and able to make themselves high-quality extracts, most do not have the equipment, experience, space, or even physical ability to do this. We are talking about people who are sick and dying, crippled people, blind people, homeless people, and other marginalized segments of our population.

According to Health Canada, “The limited clinical data that exists is restricted to dried marihuana that was either smoked or vaporized and to cannabinoid-based medicines (dronabinol, nabilone, and nabiximols) that have gone through the appropriate drug approval channels.” Knowing courts and the public will find this position distasteful, the government has attempted to find their way out of the situation by adding this statement: “There are no restrictions on how dried marihuana is to be ingested or inhaled, and patients may choose to use it, for example in foods or by vaporizing.” Without actually adding cannabis resin and THC to the MMPR, Health Canada has left patients in the same position as they were under the MMAR—a position the courts are unlikely to find constitutional.

Providing cannabis derivatives will be an even more important job for compassion clubs that continue to operate when the new regulations come into effect. While it will be easy to initially continue to serve those left out of the new system when it first comes into effect, in the long run it may be hard to justify staying open if the MMPR actually starts working well enough that the courts and general public are happy with it. However, the production and sale of edible and topical products is definitely best done in a storefront facility, and that should be more important to patients, courts, and the public than safe access to the raw herb alone.

However, in order to meet or exceed the new standards being developed in the MMPR, clubs that continue to exist will have to dramatically improve the information they provide to patients about their products. Cannabinoid profiles for raw herb and derivatives will quickly become the norm, as patients will start demanding to know how much THC and CBD are in each product, and doctors will insist they use known doses if possible. Luckily, it appears as though several labs are poised to start operating, and this should be a regular feature of many clubs before the end of the year.

Another strategy to help dispensaries become regular components of the health care system and deal with the new regulations, is to collude with other clubs in an association. This is the traditional way businesses in the same industry work together. Business associations give organizations an opportunity to help develop their industry, and lobby the government for policy changes that benefit their members.

Founded by a handful of established clubs, the Canadian Association of Medical Dispensaries has been working to create a list of criteria for dispensaries to meet before becoming full-fledged members. These certification standards will ensure the public that the operations of these dispensaries are safe and fully compliant with all applicable laws. Though these clubs differ greatly in some aspects, there is a general feeling that if we cannot bond together, we will get shut down sooner or later. We need to work together to prove that local dispensaries are the safest and most effective means by which to distribute this medicine.

How everything will work out is still anyone’s guess. If doctors do not like the MMPR, they may boycott the system, leaving patients in a temporary lurch that will justify them continuing to grow their own herb, and the existence of clubs. If the new program appears to be working, the courts are very likely to look at clubs more as opportunists than as caregivers willing to risk everything to get patients their medicine. If patients boycott the new system and put their energy into the development of good dispensaries then we might be able to keep large companies from wrestling this plant away from the people who brought their attention to it in the first place.

One thing is for sure, patients will suffer under the MMPR. Hopefully, compassion clubs will not become casualties too

Debra Harper “A significant percentage of patients (42%) reported accessing cannabis from illegal/unregulated sources in addition to access via LPs, and over half (55%) were charged money to receive a medical recommendation to use cannabis, with nearly 25% paying $300 or more.” International Journal of Drug Policy We hear how well Licensed Producers (LP’s) are […]