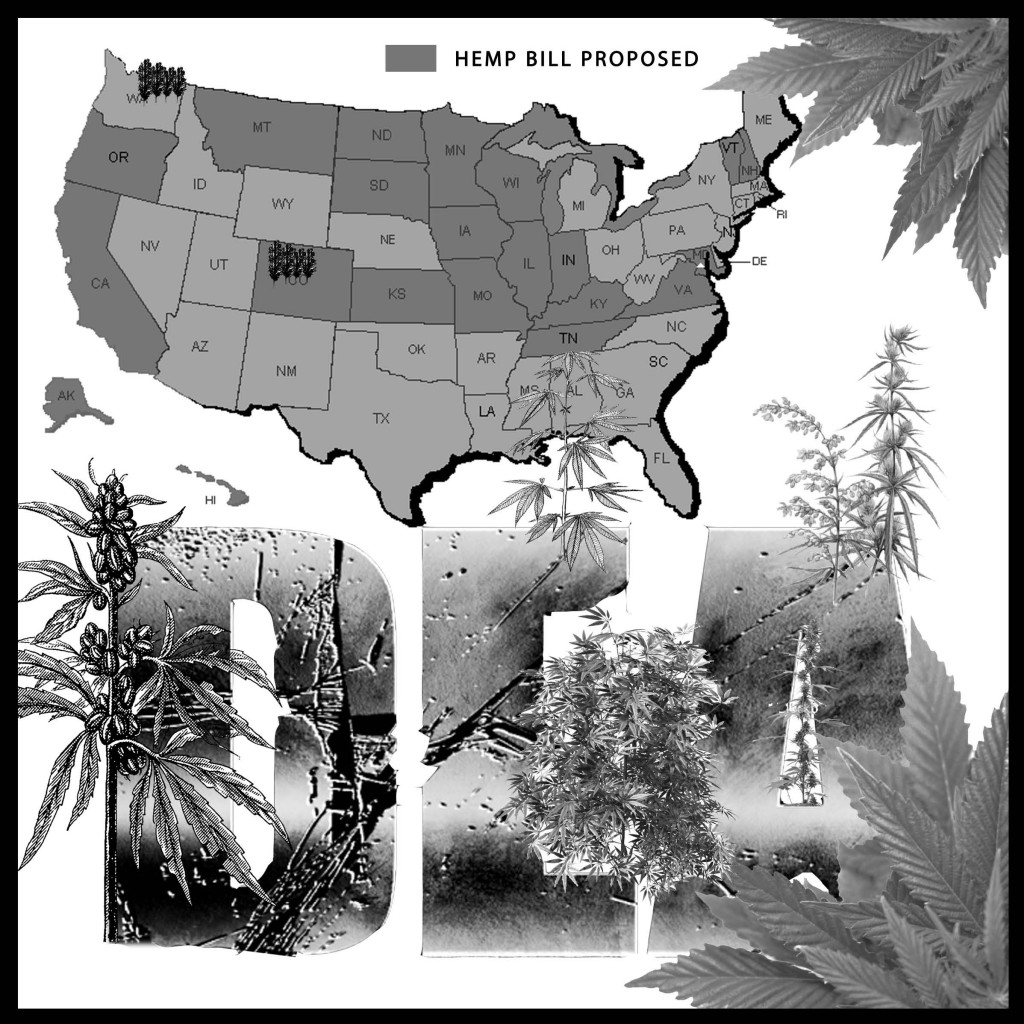 The US Drug Enforcement Agency’s ability to rely on the Controlled Substance Act, (defining marijuana as a Schedule 1 heroin-level category drug, and for which no clear distinction between hemp and marijuana exits) is what allows the DEA to obstruct the proliferation of hemp farming across the fields of America.

Industrial hemp is not marijuana.

And there is no rational reason to not make that distinction known.

There is no reason not to define hemp in its own right—namely, its farming utility. After all, hemp has negligible THC content.

The question we need to ask is why is the DEA happy to mix up, confuse and misunderstand the differences between hemp—for farming for industrial hemp end-product, and marijuana—the drug.

Could it be, in not accepting the difference between hemp crops and marijuana, the progressive efforts that have taken place at a state levels to advance industrial hemp use and farming initiatives have been frustrated and stonewalled? Indeed as a political issue, this is the story in the U.S.

At the federal level, hemp was collapsed and combined—erroneously—as one with marijuana. All cannabis became criminalized in the 1970s in the Controlled Substance Act’s legal framework. This is where it still sits today.

Hemp bills have been introduced with degrees of heightened impetus in both the U.S. House of Representatives and U.S. Senate, including in 2005, 2007, 2009 and 2011. Most recently, a 2013 bill, based out of Kentucky, made what looked like progress, but again this progressive hemp bill became a victim of a “law and order” committee debate.

Law enforcement intervenes, and true to pattern, lawmakers once again have failed to take the hemp dilemma by its horns and compel Congress to make the rational and logical changes to federal law that allows farming of hemp crops for industrial and commercial purposes.

The present stitch-up goes something like this. Whenever hemp bills gather sway and pop up for examination by elected representatives in the U.S., the Office of National Drug Control Policy has revealed an insidious tendency to deeply contaminate public perception of hemp as having no possibility for any legitimate beneficial economic-revival value, and labels hemp a “stalking horse”.

The federal agency’s position, espoused (even out loud) by former director, Barry McCaffrey, is that hemp can be used to camouflage marijuana, which has similar-shaped leaves.

This negative insinuation says that hemp farming is a decoy for the criminal drug underground, and that it therefore follows that any farmer supporting the growing of hemp crops must be a secret, society-destroying criminal.

Gil Kerlikowske is now President Obama’s Director of the Office of National Control Policy. The DEA has been told to respect states which have voted for medical decriminalization laws, but a culture of demonization remains.

Kerlikowske was a former Seattle Police Chief. Washington State, along with Colorado, recently voted to legalize the personal use of marijuana. Despite the clear “will of the people” in these two states, the DEA continues to indicate that they will go after and seek prosecution of “large-scale growers and distributors”. Are we to assume categorically that they will exclude targets in Washington or Colorado? Is the agency still keen to send a warning shot in case people get too comfortable with the idea of enjoying both legal pot and legal hemp farming?

The agency has reluctantly had to accept the legality of the recreational user rights in key states, but seemingly it has not backed down from its War on Drugs ethos. It finds itself in a Catch-22. In relation to marijuana “busts”, its funding and reason for being could be under threat. In other words, fewer operations need busting.

In its wilful determination to continue fighting the empty, socially destructive and forever unsuccessful and repugnant War on Drugs, the U.S. federal government continues to confuse hemp farming with marijuana cultivation.

Broadly speaking, police continue to parrot the DEA’s position that “illicit” growers might try to hide marijuana in hemp fields to avoid detection.

Marijuana-purposed plant cultivators, who have no desire to interfere with permits for industrial hemp farming, strike back at the DEA’s spurious argument by stating that there is absolutely no commercial benefit in combining marijuana crops with industrial hemp crops. The crops require very different cultivation approaches and conditions. Attempts to combine crops will actually disturb each grower’s best commercial and industrial interests.

Cannabis plants grown for marijuana tend to be geared for high THC value, so bud production is the key. Cannabis plants that are grown for hemp have much lower THC. A negligible amount, in fact—nearly nil THC content appears in hemp crops. Hemp crops are often packed densely—desirably 35 to 50 plants per square foot. Large, tall stalks are valued. Buds are not necessary in industrial hemp processing.

Hemp does contain psychoactive cannabinoids. But levels are so low that it is unsmokeable. This doesn’t seem to matter to the DEA, which continues to wilfully insist that the connection between hemp and marijuana is sufficient enough to warrant making it painfully difficult to obtain any legal state growing license.

When times were more enlightened, Kentucky provided 94 percent of the nation’s industrial hemp, we’re told. During World War II, the state’s farmers were encouraged to “Grow Hemp for Victory”. They made their contribution to the war effort with the encouragement and support of the U.S. federal government, undoubtedly.

The 10th Amendment (of the U.S. Constitution), mentioning states’ rights, has not proven as useful to hemp activists as, for example, the 2nd Amendment has proven useful to gun owners.

When it comes to speaking of states’ rights as they pertain to hemp, federal law, in classifying cannabis as a Schedule I substance, has perpetually overridden state demands for improved bureaucratic rules in the DEA permit process in sanctioning state hemp licensing.

So, the DEA continues to drag its heels. The United States Supreme Court has ruled in Gonzales v. Raich that the federal government has a right to regulate and criminalize cannabis, even for medical purposes.

In 2009, the Attorney General told federal prosecutors to back away from prosecuting medical marijuana patients in those states with local laws legalizing medical use. Has the DEA followed the AG’s directive to assist in enabling permits for the production of industrial hemp? Quite the contrary. The DEA continues in the advancement, or non-advancement, of the industrial hemp industry in America.

Let’s be clear again about the industrial hemp plant. You don’t smoke it. You make rope, clothing, fuel, and food from it, as well as other useful products. And all with a carbon-negative footprint.

With the laws in the U.S., growing industrial hemp without a permit from the Drug Enforcement Agency is futile. No serious-minded hemp farmer wants to risk a federal raid. There were hopes that 2013 would prove the year of progress. So far, no bill has made it out of committee. Law enforcement has been able to pressure and kill progressive bills. The need for at least a 10-acre crop commitment to harm hemp (as outlined in the Kentucky bill) isn’t making things easier either.

Now there is a further twist to this generally bad news. Rather perversely, the U.S. government has agreed to allow hemp farms, but only with a permit from the Drug Enforcement Agency. The DEA is successfully able to tie “the hemp question” up in red tape.

Some have theorized that in the end, the USDA is poised to control the hemp industry—sort of like the Monsanto, of hemp. So, while the DEA remains in the picture, characterizing hemp as a potential “drug”, it’s likely that little will change and few, if any, permits will be efficiently issued.

The way forward: ongoing advocacy, and activists forcing the issue in law. The U.S. is a litigious country, and that is how things move. So, with this mind, establish a new category for hemp, as a crop for industrial use. As a first step, get that out of the Controlled Substances Act.

The Hemp Industries Association is based out of California, but is forging networks out of state and even in Canada. It’s a nonprofit for sharing information on everything hemp. The names to look out for are: Shaun Crew, president of Hemp Oil Canada; Anndrea Hermann, agrologist and hemp farming expert; Eric Steenstra, executive director of Vote Hemp; and Summer Star Haeske, marketing director for EnviroTextiles, a Colorado-based hemp textile importer.