The future of Cannabis seems bright in North America. U.S States are legalizing one-by-one while the entire country of Canada sits pending it’s own legalization plan.  While in contravention of out-dated UN treaties, Canada stands ready to lead a rebellion against the global drug war. Elsewhere in the world, countries are watching with envy and curiosity. One country that has a long history of its own rebellious action, but a lesser known history with cannabis is Ireland.

I recently took a short trip to Ireland where cannabis news stories are few and far between, dominated mostly by comparably small drug busts. For the week and a half I was touring the country I had a few opportunities to expand my knowledge of Ireland, the land of many shades of green. Ireland is covered in ancient sites, dating human activity back as early as 4000 BC. It is also historically a land of invasion and displaced communities. Ruins of castles, forts and abandoned towns are scattered across the verdant patchwork of of hills rolling into the distance. Wave after wave of powerful foreign armies raided Ireland’s coastlines, creating the capital, Dublin, to take advantage of it’s location for trade. 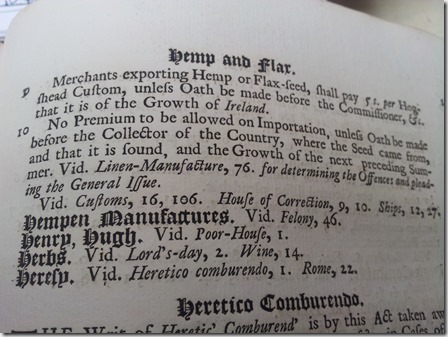 In the southern town of Kinsale, in an antique shop, Coco and I found a section of a 17th century book of law that referred to Hemp. The dusty old book showed the appropriate customs fees that are to be attributed to each “HogsHead” of Hemp that was to be exported. Fees were due unless an “Oath be made before the Commissioner that it is of the Growth of Ireland”.

After obtaining dominance of Ireland in the 17th Century, Queen Elizabeth I sought to encourage Irish farmers to grow hemp for supply to English factories. England removed customs taxes on hemp imports from Ireland but the Irish were already using hemp fibre alongside wool to develop their own textiles industry. Britain soon began confiscating Irish wool products, thereby forcing farmers to rely on Hemp production that would be shipped to English factories to produce sails for ships. Hemp was also used as rope to hang Irish rebels. 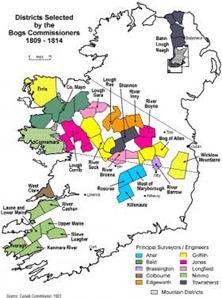 A plan was developed to drain Ireland’s great peat bogs to acquire over a million acres of land to grow hemp for the British navy. The plan was abandoned as the imminent threat of Napoleon’s Armies receded and the cost of bog development grew. Many were worried that their primary source for fuel, which came from burning chunks of peat would be put in jeopardy by these plans. (source)

While the Irish were being forced to grow hemp for the British Military, others saw the plant as an opportunity for Irish sovereignty. In 1866, Irish scholar and prominent figure of the Gaelic Literary Revival, George Sigerson released a 32 page pamphlet entitled Cannabiculture in Ireland; its profit and possibility, calling for the mass production of hemp in Ireland to help the struggling economy.

Around the same time, Irish born William O’Shaughnessy had begun to explore the therapeutic benefits and potentials of “Indian hemp” or cannabis at medical college in Calcutta. O’ Shaughnessy established his reputation by successfully relieving the pain of rheumatism and stilling the convulsions of an infant with cannabis. He popularized the use of medicinal cannabis and is credited for the introduction of cannabis indica to western medicine. 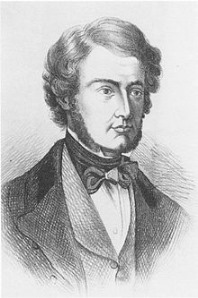 O’Shaughnessy’s many lectures and publications spread knowledge of medicinal cannabis throughout Canada and the US. Thanks to his careful documentation, local doctors and chemists were able produce their own potent tinctures. After his death the Dublin Quarterly Journal of Science published the following as part of his eulogy.

“If the history of the Materia Medica were to be divided into Epochs, each determined by the discovery of some remedy of transcendent power, the period of the introduction of Indian hemp into medicine would be entitled to the distinction of a new era…  The [Irish] public and the profession owe a deep debt of gratitude to professor O’Shaughnessy.”

These contributions to western medicine laid the framework for modern research into cannabis’ medicinal uses. Unfortunately, the shadow of cannabis prohibition fell as heavily on Ireland as anywhere, and further contributions by the emerald isle to cannabiculture were slowed to a hault. Ireland is now the largest net exporter of pharmaceuticals in the EU accounting for over 50% of all exports from the country. (source)

Stay Tuned for Part 2 of Cannabis in Ireland on the Cannabis Digest Blogs.

Next article Cannabis and Humour: Some Thoughts on What’s Funny

Why Do Canadian Teens Use More Cannabis?

A Personal Interview with Ted Smith

Owen Smith·June 17, 2016
There are no comments yet No comments

Cannabis and The New Democratic Party of Canada