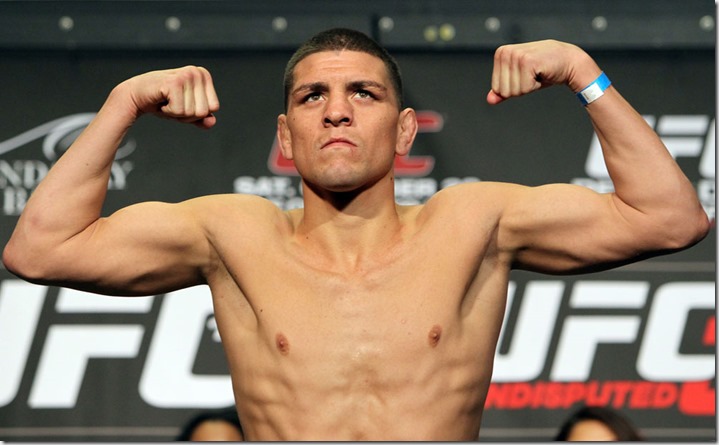 When UFC fighter Nick Diaz received a 5-year suspension and a $165,000 fine for testing positive for cannabis – as a prescribed patient – this was the tipping point for me to come out and show my support as an advocate for medicinal cannabis. Nick Diaz and former middleweight champion Anderson Silva failed drug tests at UFC 183 on Jan. 31, and were disciplined by the Nevada commission, getting very different punishments.

Silva, who tested positive for steroids and two other banned substances, was suspended for a year and fined US$380,000 — 30 per cent of his fight purse and all his win bonus. Diaz was suspended five years and fined $165,000 — 33 per cent of his $500,000 purse. Diaz says he has been prescribed medical marijuana to help deal with his ADHD (attention deficit hyperactivity disorder). Diaz was caught twice before for cannabis in 2007 and 2012. Cannabis is prohibited in competition by the NSAC, which also uses the World Anti-Doping Agency (WADA) code.

I reached out to Nick Diaz to let him know about the patients who are persecuted every day for choosing this medicine. I let him know how many other people out there are in his position, and that he is an inspiration for us all. I also let him know we are going to support not only him but also others that are being persecuted. Nick was thankful and replied, “I know I’ve been fighting for something for a long time, but I didn’t realize this is what I’m fighting for until now. I’m happy to fight for other people in this position.”

After speaking with Nick, I reached out to advocate Ted Smith who is responsible for the recently changed laws in Canada with his recent victory in the Supreme Court of Canada allowing the right to use products other than dried cannabis.  Ted and Owen Smith were found not guilty after they were charged for baking edibles for cannabis patients. Ted said, “I will always be available to support cannabis patients.”

Dieter McPherson of the Canadian Association of Medical Dispensaries also offered his support. Dieter spoke about the studies of treatment of concussions and injuries with cannabis, and was surprised by the fight commission’s stance. Other sports organizations like the NFL have raised their limits on marijuana use. Particularly sports in which athletes receive cranial and bodily impact should consider the neuro-protective, analgesic, anti-inflammatory, and pain-relieving qualities of cannabis, keep them healthier for longer. We have come together in a unified voice to help stand up for people who continue to be persecuted for their choice of medicine.

No one deserves to be judged, persecuted, shamed or punished for wanting pain relief from a legal, safe medicine.  Many others have come to the defense of Diaz. “Nick is a very close and dear friend of mine, so of course I’m going to defend him, but it’s so unfair if one person tests for steroids that could actually hurt a person and the other person smokes a plant that makes him happy and he gets suspended for five years,” said UFC bantamweight champion (Rowdy) Ronda Rousey.

When Diaz was asked by TMZ about Rousey, he noted the similarities between them and gave her props: “She didn’t need to do that. I don’t know if she caught heat for it. I hope she didn’t. But Ronda understands how I am. She’s like me, only a girl. A prizefighter. She’s a great friend.”

Floyd Mayweather Jr. seems to be backing up Rousey’s stance. On the Mayweather Boxing Channel, he was asked if he heard about Nick Diaz’s suspension and what his thoughts are about it.
“Let that man smoke weed and enjoy his life!”

While others don’t agree with the five-year suspension, NSAC Commissioner Pat Lundvall even recommended a lifetime ban for Diaz.

“It’s upsetting,” Diaz told TMZ when he was asked about the punishment. “I have to figure out how to make a living. I held off on having kids and getting married so I could fight. I gave my life to this. I am a fighter. It’s what I am. A lot of guys have to worry about what their wives and kids think, I don’t.  All my attention goes towards fighting, and now I don’t know if I can fight. They’ve taken it away from me. I’m just trying to make ends meet.”

Senator Tick Segerblom of Senate District 3 — which includes parts of Las Vegas — says he’s not happy with the punishment doled out by the Nevada State Athletic Commission. “I think what they did was totally inappropriate,” Tick says … “[marijuana] is a recognized medicine in the Nevada constitution so how can you punish someone for taking medicine, particularly since it doesn’t enhance your ability to fight?” He added, “They need to rethink this punishment and then ultimately change their rules.”

NSAC suffers from the same regressive tendencies that plague federal, state and municipal governments in regard to marijuana. Most people now support its legalization, and more still admit and accept that it’s a harmless substance and its users are needlessly persecuted, but the entities enforcing the rules are often sluggish to accept this shift.

I am a former Canadian Boxing Champion, mixed martial artist, prescribed medical cannabis patient, and a health and wellness advisor at the Shadow Mountain Medicinal Society. I’m a prescribed patient of medical marijuana because of injuries suffered in my profession. I was prescribed non-steroidal anti-inflammatory medication for years that irritated my stomach. There is still much work to be done in overcoming the stigma associated with choosing cannabis as a medicine. We must raise a united voice to stop the shaming and persecution of prescription cannabis users.

We are calling on all members of Shadow Mountain Medical Society, National Access Cannabis, Leafly, the Cannabis Buyers Club of Canada, Canlio, Cannabis Digest, the Canadian Association of Medical Cannabis Dispensaries and anyone else who wants to end of persecution of Medical Cannabis prescribed patients. We have a unified group in boycotting all Nevada State Athletic events until they drop the punishment, fine, and allow an exemption for prescribed medical cannabis patients.

Please sign the petition at shadowmountaindispensary.com or contact NSAC at
Phone: (702) 486-2575
eMail: boxing@boxing.nv.gov
to voice your opinion.

Next article CANNABOND Sales Over

Digest Admin·June 23, 2017
There are no comments yet No comments

A Simple Guide To Making Rosin