Deprecated: The $control_id argument is deprecated since version 3.5.0! in /home/oq5ayjaeetjt/public_html/wp-content/plugins/elementor/modules/dev-tools/deprecation.php on line 304
 CANNABOND Sales Over - Cannabis Digest
Skip to content 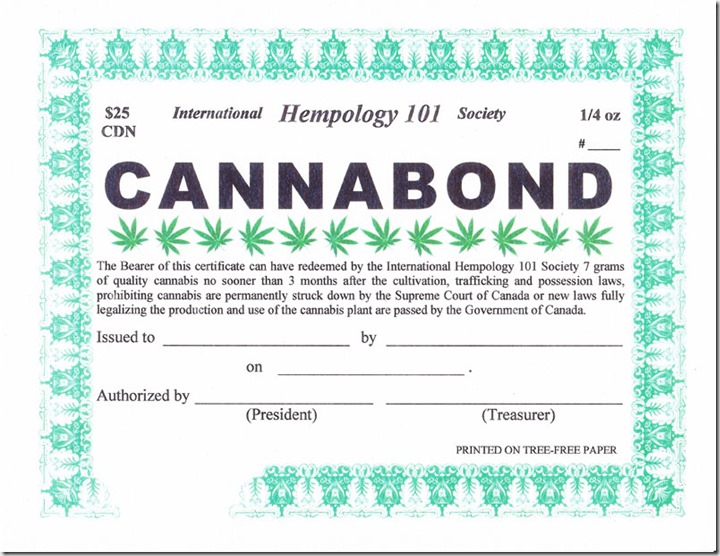 Twelve years after releasing CANNABONDS, sales are officially ending today.  Anyone wanting to get the promised quarter ounce of cannabis will have to wait until 3 months after the new laws legalizing cannabis are passed before they can cash it in.  For now, the International Hempology 101 Society is very happy to announce the end of this campaign, which is over because the new federal Liberal government appears intent upon legalizing cannabis in the next few years.

Now the battles will be fought over who can be allowed to produce and distribute cannabis.  Many fear the new laws will eliminate small business from entering the market, handing the industry over to the very big businesses that made the plant illegal in the first place.  What form of legalization our government creates will determine how easily the existing black market moves into the new economy or whether overly restrictive regulations will favor large corporations.  But that is another story.

Back in 2003 the money raised by selling CANNABONDS for $25 helped pay for several court cases I was fighting.  Sales were close to 300, raising about $7,500 which was paid to lawyer Robert Moore-Stewart, now deceased.  However, the society cannot lay claim to having thought of the idea in the first place, as selling futures in cannabis legalization was originally coined by legendary activist Chris Clay.

In the mid 1990s, Chris operated Hemp Nation in London, Ontario until he was run out of town by the police.  He launched a constitutional challenge against the cannabis laws, the first of its kind with a long list of excellent expert witnesses to back him up.  In a brilliant attempt to pay for this, Chris launched Victory Bonds, promising a quarter ounce of cannabis to everyone who paid the $25 price of the bond.  It was very successful, bringing in around $25,000 for court costs.

A couple of years later I found myself and my employees getting arrested a lot and I needed to come up with a plan.  In Nov 2000 I was arrested at the University of Victoria and charged with trafficking for passing out joints.  One week later I was arrested downtown prepared to give out 420 pot cookies I had made for International Medical Marijuana Day, eventually being charged with trafficking THC for that.  Police raids on the Victoria Cannabis Buyers Club in Jan, March and June 2002, and one final one in Feb 2003, had left me close to bankrupt.

The next challenge for Hempology 101 will be to find a way to get the almost 4 pounds of cannabis we will need to pay back the bond holders.  When the CANNABONDS were issued we gave the society three months to start paying back those who wanted to cash the certificate in.  In theory this gives the society just enough time to grow the herb itself.  Certainly the group will proceed to set-up a nice size garden if the new laws permit but otherwise will have to find other means to follow through with its end of the deal.  That is a problem we are happy to face.

The International Hempology 101 Society would like to thank everyone who bought a CANNABOND back when it was not certain at all that we would achieve our goal.  It will be interesting to see exactly how many are eventually returned or whether people realize it is far more valuable as a relic of the days when cannabis was quite illegal.  With legalization on the horizon, we are witnessing the end of a long war and the beginning of a new era in peace and prosperity.