While there are many reasons to celebrate medical cannabis dispensaries getting licenses in Vancouver and Victoria, the new bylaws could be forcing the closure one of the most important components of a true compassion club.  Without a safe place to consume their medicine, many patients would be forced to smoke outdoors or in other uncomfortable situations.  For others, smoking rooms like the one at the Victoria Cannabis Buyers Club, gives members a public place to enjoy the company of other patients, giving them a chance to help each other with everything from housing issues to sharing important information about how to properly consume cannabis or new products.

For many members of the VCBC the closing of the smoking room would be a serious, dramatic and upsetting step backwards.  Many great friendships have developed over the years in the room affectionately known as `The Box` after the original closet that members used to be able to smoke it.  Since the smoking room at the club has existed for years with little effect on the neighbourhood, the city council should consider all available avenues to keep it open or find an even better place to use as a safe inhalation site. 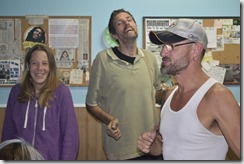 Whether it is to escape the weather, meet old friends or to learn more about the social services available in town, having a room for patients to medicate has always been a very important part of the club.  This room has allowed staff to teach new members old smoking techniques and display new techniques to old smokers.  There is so much to learn about cannabis and so many developments occurring legally, politically and with new products, that the city should be looking a lot closer at the value of these rooms before banning them outright.

Ignoring the fact that the VCBC has safely operated a safe inhalation room since 1996, the city is simply citing reasons given in Vancouver for shutting down all such rooms there.  With the majority of apartment building banning smoking of any kind and some shelters like the Salvation Army kicking people out for even being in possession of cannabis, this is a serious concern for the poorest patients using this medicine.  The following quotes are from the city staff report the City of Victoria received a few weeks ago, which seems to care little about the needs of patients, with the full report linked below this blog.

`Marijuana can impair concentration, coordination, and judgment. Consumption of marijuana at a business can impair an individual’s ability to safely drive or otherwise travel from the business. Liquor consumption poses similar concerns and a similar prohibition against consumption on the premises is in place for BC liquor retail stores. Consumption of liquor is only allowed at licensed establishments where staff are trained and available to monitor consumption and any resulting impairment.` 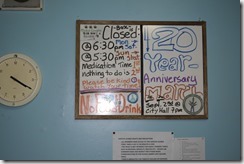 Comparing cannabis to alcohol in many ways might seem like a useful means of creating laws to control the use and sale of the herb but in this instance it is counter-productive and leads to backwards conclusions.  Cannabis does not affect patients the same way alcohol affects people drinking.  For many patients that arrive at the club in pain due to a lack of medicine, having a toke before leaving helps improve coordination and concentration, controlling muscle spasms while improving mobility.  Giving the patients a room to sit and relax for a minute allows them to wait until they feel comfortable enough to travel again.

Saying that since liquor stores do not allow consumption, so therefore dispensaries should not allow smoking, ignores the fact that other establishments that sell alcohol do allow consumers to drink booze on site.  They are called bars and restaurants.  Though I do not drink I seem to recall some establishments are allowed sale of small amounts of liquor, too.  The city staff recognize that at establishments where liquor is consumed staff are trained to monitor consumption by patrons, and there is every reason to believe the same could be applied to the consumption of cannabis in a lounge.

The city staff report goes on to say,

“Smoking marijuana at a business is of particular concern. Current CRD prohibitions against smoking in or near a building apply only to tobacco. Smoke from any source is harmful to lung health and second-hand marijuana smoke will be an irritant to some customers. Marijuana smoke can also exacerbate odour concerns.”

Likewise applying other rules to cannabis that were created for tobacco is not the best policy either, as there is no evidence to suggest that second-hand cannabis smoke has any negative effects in the first place.  Rooms can be built with proper ventilation systems that would mean customers not entering the smoke room would be free from any potential concerns of inhalation of second-hand smoke.  The smoking room that has existed at the VCBC is a perfect example of how easy it is to control these problems to allow patients to medicate with little to no effect to neighbours.. 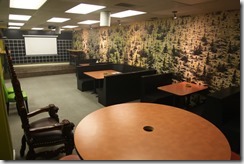 It is the hope of many patients that the city of Victoria will reconsider prohibiting the consumption of cannabis at dispensaries, especially when we have had one at the VCVC for years with so few problems.  However, despite listening to patient and their advocates about other potential problems with the regulations, there appears to be little chance the city will budge on this issue.  Without city councillors taking unusual steps to grant the VCBC an exemption of some type from the regulations, the smoking room is likely going to be shut down next year.  Members of the VCBC need to stand up and fight for this service now or one of the most important parts of the club could disappear forever.

If the VCBC does lose its smoking room, there will be a lot of pressure and incentive for the International Hempology 101 Society to open a facility in Victoria where members from all clubs can come medicate without affecting staff or patients that want to stay far away from any second-hand smoke.  There is no way cannabis activists can stand aside if patients are allowed to purchase cannabis but are forced to the streets to use it.  Clubs like the VCBC are like a refugee center for victims of the drug war and there is no way we can allow the city to take this step backwards at a time we should be moving forward with reasonable regulations that do not risk the health of the patients that are the most vulnerable.

Owen Smith By popular demand of the Cannabis Digest readership, the Summer Issue #49 will feature a wordsearch puzzle. Find some of the many Marijuana loving Musicians from this mix of letters. If you don’t have a Cannabis Digest newspaper; you can Print the Puzzle, but be sure to ask your local headshop or dispensary to order a […]