Deprecated: The $control_id argument is deprecated since version 3.5.0! in /home/oq5ayjaeetjt/public_html/wp-content/plugins/elementor/modules/dev-tools/deprecation.php on line 304
 7 Key Points For Public Cannabis Education - Cannabis Digest
Skip to content

On October 19 2015, Justin Trudeau, currently our Prime Minister, led the Liberal Party of Canada to victory with a comfortable parliamentary majority. Legalizing and regulating the sale of cannabis to adults was part of the party’s platform. In June 2016, Justice Minister Wilson-Raybould announced the formation of a task force to develop a legalization plan. In any sane nation, the federal department responsible for public health would then have announced its new cannabis education program. In its plan, this sane department would have included the following.

1. Eliminate from the criminal code, section 462.2. That section states that every one who knowingly imports into Canada, or exports from Canada, instruments for illicit drug use, or literature seen as promoting the same, is subject to arrest and prosecution. A first offense is punishable by a fine of up to $100,000, or six months in prison. The federal Conservatives led by Brian Mulroney crafted this law in 1988, at the height of Ronald Reagan’s hopped war on drugs. If you have ever wondered why our bookshops are not stocked, at this late stage, with useful literature on cannabis, wonder no more. Of course you can get just about anything on Amazon.ca, but that is useful only for people actively engaged in self-education on the topic, and who know more or less what they are looking for. Wander about the shelves of your local shops, or even public libraries, and you will find no clue that the plant exists.

2. Compile a modest list of sensible books on the topic, encourage bookshops and libraries to stock them, and subsidize the sales. The books would include histories of cannabis in all of its forms, in Canada and elsewhere. And they would include, without fail, bound copies of the 2002 report of the Canadian Senate Special Committee on Illegal Drugs, called “Cannabis: Our Position for a Canadian Public Policy.” That report is exhaustive, and as relevant today as it was in 2002, all paid for by Canadians.

3. Create pamphlets with some highlights of cannabis legal history in Canada, and distribute them liberally, months ahead of introducing legislation.

5. Create, collect and provide some helpful ideas, and provide funds for provincial and local government to promote such forums.

7. End the DARE program of drug education for youth in schools, and replace it with something more honest. 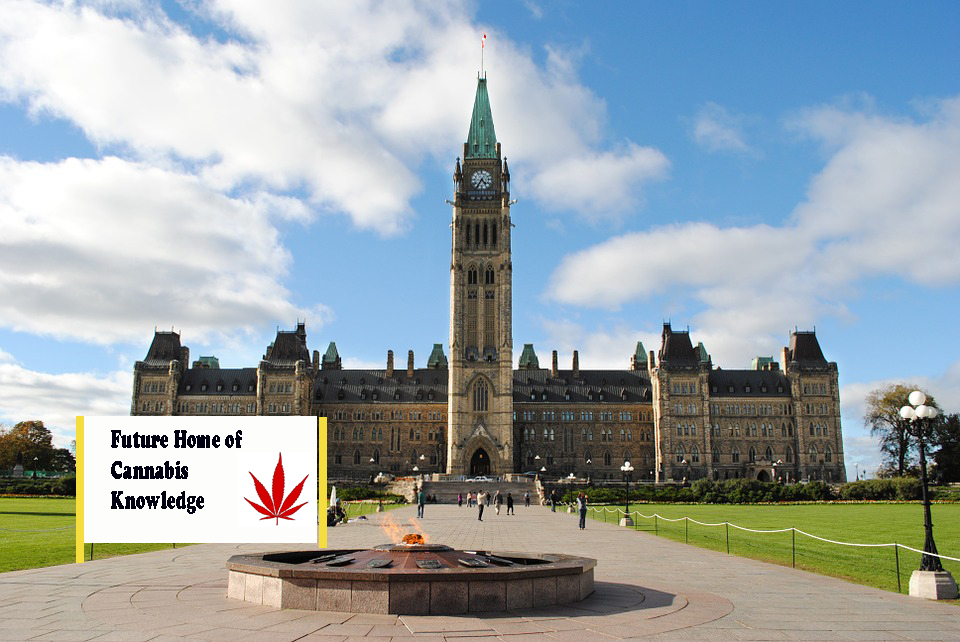 Of course, one might say, that kind of action would require a government with a positive outlook on cannabis, one that would see legal cannabis as a net benefit for Canadians. Well yes, maybe. But the 2002 Senate Report listed above, is hardly a wild-eyed, radical endorsement. Moreover, the depth of public ignorance on cannabis, even for otherwise well educated Canadians, should be taken as a call for some rudimentary information.

This past week I attended part of the convention of the Union of BC Municipalities. Happily, the UBCM passed resolutions intended to make sure that local governments are included in future federal and provincial plans for distribution, and for revenue from sales. Whilst wandering about the commercial display area, I had a fine opportunity to introduce myself, and Cannabis Digest. I have to say that I encountered much interest, and even enthusiasm. I was already impressed that the UBCM seemed happy to offer me a complimentary pass as a media participant. But I could only stand in wonder at the questions that came my way. Was it really true, I was asked, that cannabis is useful as fibre, and was used in the past for this purpose? I launched into a short, enthusiastic talk. Was Trudeau planning to decriminalize cannabis, or to legalize cannabis, and did I think he would really do it? I noted that an announcement to legalize had already been made to a general assembly of the United Nations. Was it true that there had been a major crackdown on dispensaries in Vancouver, causing them to close? No, I said, in my best, congenial tone of voice. Vancouver plans to license dispensaries, as does Victoria, and a few other municipalities. Others are considering it. Why would someone like me be interested in the UBCM? Well, I noted, local governments have long been instrumental in blocking or supporting federal laws on cannabis, and some have recently taken the lead by regulating dispensaries. Everyone listened with interest, but I may not have won many converts. I was, after all, a journalist for an unknown newspaper, wearing a cannabis leaf button, speaking for the gray and black markets.

Of course these were not city councillors. They were representatives of energy companies, and associations of public libraries, and public transport, and fire departments, and other such things. But they were intelligent, well-spoken people, and they were genuinely attentive. What a miserable, depressing, sad thing it is that they have nowhere to turn for better information. There are no useful bookshops, libraries, or public forums for them. There are private conferences. But these don’t seem to come to wide public attention, and they charge fees. Many take place in Vancouver, or Toronto, and so require an outlay of additional sums for transport and accommodation. What these folks need is something local, plentiful, and affordable. 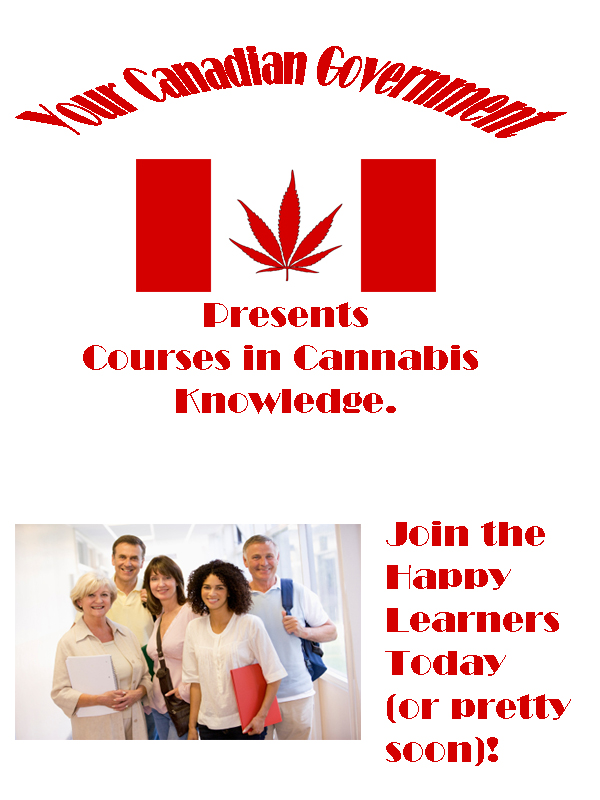 That kind of education should be the first obligation of a government planning to legalize cannabis—that, and ending the arrests. But the feds have turned their backs on this obligation. They have chosen instead to manufacture fear campaigns, centred on dispensaries. They have forbidden labs to test cannabis that comes from dispensaries—so much for public health—and then used this ban as a platform from which to announce that medicines sold at dispensaries are untested and dangerous.

Judging from the Premier’s talk at the UBCM, the province isn’t planning to step up to the task either. Addressing a standing room only crowd, Premier Clark gave what can only be called a feel good, pre-election speech. She touched on the royal visit, the booming BC economy, the money the province can now provide for good works, the beautiful BC climate, the launch of Wear Orange Day to commemorate the wrenching story of BC native residential schools, and the LNG pipeline, recently approved by the feds. But she ended her speech with the recent surge of fentanyl overdoses in BC, highlighting her government’s emergency plan of action. BC youth, she said, were at risk; those that use recreational drugs might inadvertently be served a lethal dose. Information tables at the back of the room featured three separate papers on the subject. To be sure, overdoses of anything are bad, but they are more a side effect of prohibition than anything else. Meanwhile, we are six months away from a bill to legalize cannabis, and what do we hear about? Drug scares. Drug Deaths. Drugged youth. I don’t imagine Clark to be anti-cannabis. But no one in office at any level seems to grasp what’s needed in the way of public information.

So what’s to be done? Local cannabis cups, festivals, and large conferences are great for the burgeoning industry, and fine for rallying the pro cannabis troops. They push the boundaries, all to the good. But they won’t help the folks at the UBCM expo, and many other BC residents. Pamphlets created by the BC industry might not be viewed as authoritative. But strategically planned talks to interested groups are in order, as they are interpersonal, and create dialogue. And public film viewings, followed by question and answer periods, may just be doable. Cannabis education through entertainment, we could call it. In Canada, we’ll soon have ‘legal.’ But what we need, in addition, is ‘sensible,’ and ‘normal.’ How does one create these things? Between now and spring, let’s hold that question in mind.

By Ted Smith The war of words just got a little more interesting.  One day before calling a federal election, Health Canada announced that a renewed effort will be taken to stop illegal dispensaries and websites from advertising.  This puts the Cannabis Digest newspaper square in the forefront of another legal battle with the federal […]

By Dean Schwind For many years now my friends and I have proudly celebrated the cannabis users holy day of April 20th. The 4/20 celebration has grown from humble somewhat mysterious beginnings into an internationally recognized day to honour and praise all the wonderful things about cannabis. There are marches and smoke in’s, raves, festivals, […]