with the support and verification of Randy York, RCA.

At the end of the day, either personally or through your business, we are all paying taxes to the government. If you have to pay that money anyways, why not give it to charity rather than line the pockets of the man?

A study released by the Fraser Institute has concluded that Canadian generosity is greatly in decline. With only 22.3% of tax filers giving to charity, Canadians have been giving away less money every year since 2006. And really, instead of paying extra money to charity, the government allows us to basically allocate some of the cash we would have paid to our taxes owed by donating our money and/or stuff.

Canada has always had a reputation for being a country full of nice people and the only reason we aren’t giving away loads of our cash is because people cannot afford to. The economy sucks. However, despite the fact that the government is well aware of this fact, a non-lethal plant with incredible economic potential is still not legal and our favorite industry fights to exist.

Considering the fact that it really doesn’t really cost us much extra money; giving away as much as possible to charity is an easy and cheap way to help both yourself and the community on a multitude of levels. Plus, we stoners are known for being pretty nice people so it is kind of appropriate that we live up to this stereotype.

Collectively, the cannabis community is massive and very powerful. We are changing the laws in this country! Imagine the positive impact there could be throughout the world if every cannabis supporter and business made a point of donating to charity.

Donate some of your stuff instead of money! Or Both!

As long as you get a receipt for an item donated to a registered charity, the amount is deemed as fair market value and if it is within the past 5 years, you can claim the amount on either your personal and corporate tax return. Land can be donated and claimed. However, the most interesting options available to donate are personal use property and inventory. Items such as jewellery, stamps, coins, rare books, antiques and basically anything that you could sell for a capital gain or loss is considered to be capital property and you can claim it as long that charity writes you a receipt for the fair market value (clothing, furniture etc.).

Hey, Glass Blowers! Check this out!

Usually the government considers art that you create as personal inventory. However, if you are an artist, make a piece of art that you price to sell yet donate it instead; you can claim the fair market value with a valid receipt.

Choosing to Claim on Personal Versus Corporate Taxes – It’s all in the credit rate.

There are two different ways to claim charitable donations on your taxes; through your personal income tax or your business (corporate) income tax. Deciding which to pick will be dependent on your company and income, as well as the amount of charitable donations you are going to claim. If you are self employed or have a small business that makes less than $500,000 per year, it can be way more beneficial to make a claim on your personal income taxes.
Personal Income Taxes

In Canada, the government will dole you out more cash after you spend a certain amount. Without a doubt, your donations go a lot further on a personal return. Spend $200 or less for a 15% non-refundable federal return plus, include your provincial rate and you get 20.06%. Anything above and beyond gets you a total rate of 43.7%. Plus, If you have never claimed charitable donations, you are eligible to claim any past charitable donations from March 2013, up to 2017 using the First Time Donor’s Super Tax Credit! Money, money, money!

Because we Canadians are starting to look a little cheap when it comes to charity, the government sweetened the deal with this kick ass credit. Basically, if you haven’t claimed any donations since 2007, you are eligible for the First Time Donor’s Super Credit. Your donation credit will literally be totalled a second time and that credit gets added to your tax return. You have already paid income tax throughout the year so this is just going to add more money to your tax return. In layman’s terms, this means that your rates go up by an extra 25% up to $1000. 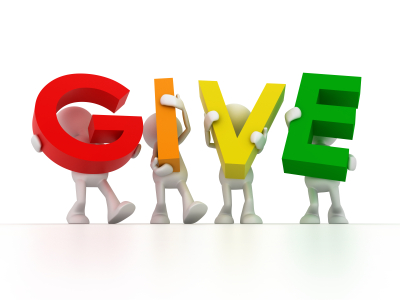 On a hunt for a rolling paper, Suzy finds a receipt from that time she donated $500 cash to “Cops For Cancer”. Thanks to Ted’s old trick for aphids and her humongous yield, Suzy had enough income to donate to charity for the first time. Thanks to a mental moment of cannabis induced clarity, Suzy sticks that receipt in her wallet to give to her accountant.

If she wanted to avoid missing out on that sweet glass peice sale, she would have to figure out how much of that was coming back to her. Knowing how awesome her tax return would be would help her hopefully talk Nicole into putting it on layaway. Suzy’s first-time donor’s FDSC and CDTC would be calculated as follows:

“Get two birds stoned at once.” – Ricky ‘Trailer Park Boys’

Keep in mind, if your company is claiming charity donations on corporate taxes, the rate is lower because in theory, a company has the ability to make and donate more. The CDTC is a great way for any business to support their community as well as pay a bit of their taxes in advance. In an industry that is constantly adapting to changing factors such as the law or crop harvest times, this is a way to maximize times when you have money available.

Cannabis related businesses have a unique challenge that is literally written into the law: no advertising. This makes it very hard to show off your stuff to potential customers and to desensitize the average person to the damage prohibition did. Educating non-users without ruffling conservative feathers is a puzzle that can only approached based on each situation. Charitable donations is one way to gently broach the conversation as most people enjoy money and will consider listening to someone giving it to them.

It doesn’t matter how or why you use it, cannabis is medicinal. A lot of cannabis related customers have been, will be, or are currently, the people directly affected by these charities. Donating literally puts money given to you by the community back into it so we can help those who help us.

Unfortunately you cannot donate to just anyone; the charity has to be registered for you to be able to claim it. Plus, a lot of people these days are wary of their money not being used properly or in a worst case, fraud. The list of registered charities in Canada is so massive you have to apply for it the CRA website so it can be hard to sift through them.

Chairityintelligence.ca is a website that focuses on making all charities accessible and transparent so you can give an informed dollar. Plus, you can search out the causes you care most about to make the most of you donation. The A-Z listing gives you all the contact info and registration number making it really easy to search for a good cause.

If you want to support your local community, here are some of the charities registered in Victoria:

From an early age, Julia displayed a passion for writing and languages, a fascination with journalism and an amazing memory. Her career focus had been gaining skills and experience in many different fields of counselling. Her ambition to have a career as medical general practitioner was interrupted when she became very ill from cervical cancer and the procedures necessary to remove it, beginning almost seven years of severe medical issues. Using the written word as an avenue of release and feeling the miraculous benefits of cannabis first-hand, she developed her skills throughout her illness and shifted her focus to cannabis from the patient perspective. Today, she devotes her life to a cause she truly enjoys, cannabis activism, so that no one need suffer unnecessarily due to lack of education or access.

A Rant for a Rant: Parsing Mr. Trudeau.