Deprecated: The $control_id argument is deprecated since version 3.5.0! in /home/oq5ayjaeetjt/public_html/wp-content/plugins/elementor/modules/dev-tools/deprecation.php on line 304
 Ten Thoughts on the 2015 Canadian Election - Cannabis Digest
Skip to content

The Obstacle Course and the Manifesto

I find it helpful, from the emotional standpoint, to think of federal elections as bizarre forms of public sport, multi-dimensional games of chance, perhaps, with parameters that were they not legal, would count as borderline insane.  This image never fails to cheer me up.  On other days I am happier thinking of them as carnival rides, except not very enjoyable ones, and with unpredictable pathways.  Take time to conjure the image that best gets you through; if you are a Canadian, you will wake up immersed in it for the next 35 mornings.  Here in upper North America we’ve endured a decade of corrosive conservatism.  Now 70% of us say that we want it to end, and we have three major parties, including the dreaded Conservatives, in an apparent dead heat.  Less predictable than usual, thus, this election is bound to stretch to our capacity for words.  Consider the landscape. 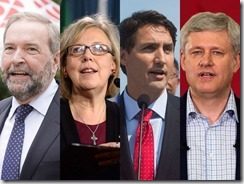 It is possible in Canada for a federal party to form a majority government with only 38% of the popular vote, and a minority one with only 34%. That is because we have a first past the post system, and second, because the population is not divided evenly among the electoral ridings.  Canadian, eh?  Harper already commands 25-30% of the electorate, or so we’re told.  If that’s so, he needs only 10% more to reign until 2019, perhaps.

For this election there will be 30 new ridings, which means 30 new parliamentary seats.  Such increases follow the population census in Canada, conducted every 10 years.  Independent groups, one in each province, draw up the new riding boundaries.  Unhappily, the population increases have been mainly in the suburbs, and largely in BC, Alberta and Ontario, places where the Conservatives have previously been competitive, if not popular.  It is possible, though, that the social composition of the suburbs is changing.  No one has commented on it.  Either way, all leaders agree that whatever party takes the greatest number of ridings gets to form the next government.

The progressive vote—the vote in favour of social justice (social programs, income redistribution) and environmental health, and away from Harperism, is split among three major political parties, and two minor ones.  The non-progressive right, by contrast, is united.  NDP leader, Mulcair, by his own account, approached the Trudeau Liberals camp on the subject of a coalition, but was rebuffed.  That’s sad.

As government in power, the Conservatives have had a long lead on bending the public ear.  The party has been on a Canada wide anti Justin Trudeau bender since 2013, when Liberal Party of Canada elected Trudeau as its leader.  Thus for two years before he ever had to call an election Harper has flooded Canadians with the ‘Justin’ mocking phrase, ‘He’s Just Not Ready.’  In addition, since October 2014 we’ve had a steady overflow of misleading anti-cannabis ads.

The voter turnout in the last federal election, in 2011, was 61%.  It stood at 75% just post World War II, and peaked at 80% in the early 60s.  We need to get those earlier numbers out again.  We especially need 18-24 year olds to vote.  That group’s participation rate in 2011 trailed at less then 38%, even for those with a university education.  We also need 25-44 year olds to vote: their group hovers around the 50% mark.  By contrast their parents and grandparents participate at rates of 65% and 77% respectively.

It is true that federal parties, Greens excluded, do not address issues that affect young people.  They say nothing about affordable housing, child poverty (relevant to young parents, and to single parents), nothing about the escalating costs of higher education or relief for student debt, and little about health.  They talk about job creation, but general unemployment stands at 7.1%, and youth employment is at 14%; plus 42% of these work only part time.  Those are depression era numbers.  They are terrible.  Moreover, many employers now offer younger recruits lower pay for the same jobs that used to pay better.  Unless we turn this trend around, our children and grand children will be in a precarious position during their retirement years, if they will be able to afford retirement, that is.

Our culture is not friendly to long term planning.  Parties are locked into four-year terms.  The corporate world thinks in quarter-year chunks.  Mass media foster short attention spans.   Politicians give us sound bites, and the social media give us click bait.  We do not foster moderation.  We have extreme sports, extreme food fads, and are ruled by extreme conservatives.  We fail to foster health; sugar, salt and fat peddlers like so many Pied Pipers lure our children, and no one knows how to stop them. 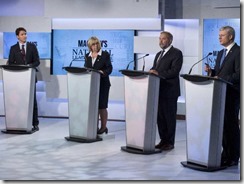 It seems that we can’t look to the political debates or to the interviews in this campaign to bring our most crucial issues to the fore.  Cannabis has not featured at all in any to date.  I have to say, I was mistaken on this matter.  I expected to hear something on this issue.  In addition, recent interviews with the leaders carried out by CBC’s veteran journalist, Peter Mansbridge, which might have shed some light on the issues, or at least the candidates, have been disappointing.  It has to be said that the man appeared managed to look warm and fuzzy, whilst doing little else.  When Harper said he’d balanced the budget, Mansbridge nodded.  A serious interviewer would have challenged this claim.  Harper balanced the budget by stealing money from the Employment Insurance Fund, and selling off General Motor stocks.  That’s not a sustainable plan.  From whom would he steal next time? And what would he sell off next?  When Mulcair boasted about his $15 a day care program, Mansbridge said nothing.   A serious interviewer would have asked: but what if the provinces cannot afford their 40% share?  Have you asked them?  When Trudeau said that he would not contemplate a coalition, he met with no sharp words.  A serious interviewer would have asked: is this a responsible attitude when we so many Canadians are hoping for change?  Alas.

As if these matters do not bring us enough grief, let us consider another issue.  Harper stands for the wealthy; Mulcair and Trudeau wish to boost the middle class; May is more attuned to the poor.  Well, what about folks who do not fit such categories, but are nevertheless crucial to our wellbeing?  What about artists, musicians, writers, thinkers, and cannabis activists?  I can’t live without them.  Can you?  Who’s offering funding for them?  Do we really want a society composed entirely of niche skilled pipeline builders, business people and other practically minded folk?  An astute party would invest in cultural development, and reward activism that brings good things to all Canadians.  We don’t have such a political party.

So yes, cynicism is rampant.  We’ve have senators padding their expenses, chiefs of staff lying about it, and Conservative employees prosecuted for creating robo-calls that sent voters, last election, to non-existent polling stations.  We’ve had this party and that party, and yet Child poverty remains at 13.5%, 1/10 Canadians depend on food banks, the 1% earns $300,000/year on average, and there is 21-year life expectancy gap between the rich and poor.   So why participate in a political game so monumentally skewed, ill willed and stupid?

Well, because cynicism is also dangerous.  You may well feel that, by voting, you are joining the side corruption.  But there remains such a thing as a better or worse political authority, even if they all tend to corruption, and even if they can’t tell a compassion club from a camellia.   Since 2006, and particularly since 2011, we’ve had some of the most centralized, inaccessible leadership Canadians have ever seen.  However low our view of elected officials, of mainstream culture, and even of humanity, we have to start imagining that it could get worse.

So if you care about this country, don’t be fashionably aloof.  This fall, fight cynicism, find out what you need to do in order to vote, and drag your friends along to the polling station.  If you need a beacon of hope, then it is this.  A large voter turnout is the best predictor of change.  True enough, there are new and cumbersome ID rules, on Election Day there may be creepy tricks, and the odds can favour those in power.  Still, don’t be a statistic, and don’t let these Conservatives pull your strings.  Go back to being an eco-warrior, world-class grower, or artist, all without borders, on October 20.  On October 19, just be a Canadian voter.  If you need a calming Mantra, you could consider borrowing the chant adopted by the anti-war activists who, in 1967, set out to levitate and exorcise the Pentagon; it goes: “Out Demons, Out.”  If that doesn’t work for you, invent a new one, and send it to Cannabis Digest Blogs.  I’ll be happy, even thrilled, to pass it on.

Many will suffer and die from loss of their gardens   By Ted Smith War is seldom a simple affair. This includes the War on Drugs. This drug war is a fight for power: control of the economy, control of one’s health, control of government resources. It is a war which forces patients to suffer […]

By Owen Smith The long road of trials that made up the six year RvSmith constitutional challenge was about as successful as such a legal quest can be.  The Supreme Court of Canada delivered a landmark ruling that affirmed patients rights to choose a logically safer form of their medicine.  I was found not guilty and the […]