Last Thursday evening, November 12th 2015, it was my privilege to attend a forum on the future of cannabis in Canada, planned and hosted by Lift, a web-based, independent communications hub established in 2013 by Tyler Sookochoff and directed by David Brown.  The forum, held at UBC’s downtown campus at Robson Square, was third in a series of three.  It featured five panelists: three men: Dr. David Hepburn, on the forefront of educating Canadian doctors on cannabis; Andrew Livingston, Colorado-based lawyer and policy analyst; and Chris Stone quality assurance director at Broken Coast, a Health Canada Licensed Producer (LP); and two women: Rielle Capler researcher and co-founder of the Canadian Association of Medical Cannabis Dispensaries (CAMCD); and Theresa Kozak community liaison with Tweed, also an LP.  There was, in addition, a moderator: Hilary Black, founder of the BC Compassion Club Society (BCCCS), and now Director of Patient and Community Services at LP, Bedrocan Canada.  It must be noted here that Tweed has recently acquired Bedrocan Canada, and now styles itself Canopy Growth Corp.  Canopy is a publicly traded company that intends, says chair and chief executive Bruce Linton, “to dominate the industry.”  At least that’s what he told the shareholders.  Black and Kozak are Canopy employees; Black and Capler are associated historically with the BCCCS, and thus with medical cannabis dispensaries.  Hepburn and Livingston are independent of the LP/dispensary dichotomy. 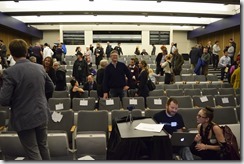 The audience, about 100 strong, was no ordinary group.  It featured activists Dana Larsen and Nick Whitehead of Sensible BC, David Hutchinson, Dieter MacPherson, executive director of the Victoria Cannabis Buyers’ Club (VCBC), Owen Smith (also on video duty for this event), and Jamie Shaw, member of the BCCCS collective, and president of CAMCD, to name a few.  Experience and intelligence dominated, and conversation sparkled.  The event was sponsored by a number of groups, including Canopy.  Most notable among these were two regulatory bodies: CAMCD, representing dispensaries, thus far unregulated and illegal; and the Canadian Medical Cannabis Industry Association (CMCIA), representing the LPs.   A number of questions were posed, but the overarching one presented by Black was this.  Given the well-known acrimony between these two organizations, can we establish a set of regulations that would allow all interested players a place in the new legal industry, and that both CAMCD and CMCIA would accept?  In what was otherwise a mild mannered event, wild applause accompanied all calls to include dispensaries, and currently unlicensed growers and producers, in any future plans.  As a less than neutral observer—I am allied with the VCBC—and with Linton’s message rattling my optimism, I was anxious to see this discussion unfold.  Let’s consider three of the questions addressed.

Question One: How can we work together?

In this matter, Colorado based panelist, Andrew Livingston, had the most coherent advice to offer.  First, he noted, it is essential for any legal system to permit personal gardens, and to make space for small and intermediate growers and producers.  (Big Applause)  That’s because the presence of smaller participants drives creativity.  Any of them could discover, invent, or conjure something that will benefit us all.  Second, one should adopt a legalizing process in which all interested players can meet and have an effective voice.  Third, the best way to meld disparate groups is for them to become business partners.  Entities that engage in well-run trade relations are by definition not at war.  And finally, the process of carving out industry niches should be dominated not by protectionist attitudes—as in, I own this or that productive activity—but rather by the needs of customers.  Let the industry be consumer driven, he argued, rather than producer driven.  As an example Livingston noted the craft brewers of beer, whose expanding market share has resulted not from anyone’s claim to be first, biggest or baddest, but from how well beer fans like the craft products.

All present agreed that there should be no set number of growers, producers or sellers.  In Capler’s view we need, very soon, to establish practical relations among all Canadian growers and producers.  One can imagine a set of varied and loosely associated providers of seeds, clones, buds, medicines, and accessories, each occupying a productive niche in a cross-country buzz of partnerships.  But among what are now highly unequal players, I imagine it with difficulty.  I continue to have nightmares themed on Linton’s will to dominate.

In this matter, Dana Larsen sounded the best counter business alarm.  The new industry, he argued, is set to capitalize on prohibitionist pricing.  The fact is, had we never had prohibition, cannabis might well be available practically free of charge.  Farmers would be growing it; neighbours would be growing it; one might find it growing wild in places, and be able to forage for it.  Cannabis will be truly legal, in his view, when it is plentiful and inexpensive like, as everyone loves to say, tomatoes in season.

But we have had prohibition, and so we are stuck with where it’s landed us.  We should not be stuck, however, with a narrow perception of what is desirable.  Larsen’s vision is an important standard to which to aspire.  I have a personal, wild-eyed fantasy version of it that goes like this.  We teach everyone who is interested how to grow, how to make basic extracts, and how to cook with them.   On this point, bear in mind that the medical side of the 20th century cannabis movement has been patient driven, and many patients do perfectly well home-producing and self-medicating.  Within two generations, we back out of the overarching business model, and return as far as is feasible, to the primordial, pre-prohibition garden, characterized by sharing and low level trading.  Exceptions might be made for specialized medicines that require more skilled artisans.  And of course, for people less interested in self-sufficiency, some dispensaries will remain desirable.  This fantasy still leaves lots of room for producers of seeds, tools, fertilizers, magazines and books, and the like.  It is, I admit, idealistic.  But we relinquish ideals at our peril.  The fact remains: there has never been a good reason for patients and others to be left worrying about affordability.  Cannabis is a weed.

Question Two: How can we make sure, in a legalized market, that patients’ issues remain a priority?

How indeed?  On this topic several suggestions surfaced.  Rielle Capler argued that in any system that aspires to be of help, patients must have an effective voice.  Absolutely.  Indeed, let me state this point more emphatically.  The entire medical side of the industry should be governed by a board of patients, elected for limited terms, plus a limited number of others, which together should be given veto power on regulatory policy.  ‘Others’ might include medical researchers, lawyers, and policy experts.  In no other way can we assure that cannabis policy will address patient needs.  Patients have led the way since the 1970s.  Let them lead on.

In her personal comments Black noted that law enforcement has made dispensaries impossible in much of Canada, and that LPs have played an important role in meeting the needs of patients, especially those who have not been able to see their way to breaking the law.  LPs have, in addition, been effective in reaching out to doctors, who are more comfortable with a business model.  This, in a nutshell, has been her motive for working with them.  Let me begin by identifying myself as one inclined to snarl, on principle, at LPs.  But okay.  I take Black’s point.  In any case it is beyond doubt that LPs serve a group of patients different from those served by earlier versions of legal medical cannabis in Canada.  There may always be some constituencies best served by them.

What we are lacking, though, is data on how well the MMAR, which allowed patients to grow for personal use, was serving the needs of patients across the country.  That was the Health Canada plan that preceded the creation of LPs.   A current legal injunction allows some patients to retain their MMAR licenses; others, for a variety of reasons, have lost theirs, hence the above-noted acrimony.  The sad fact is, as panelist Chris Stone pointed out, the fog created by prohibition has robbed us of proper sociological data.  People are afraid to talk.  As a consequence we have no idea how many medicinal users there really are in Canada, what they are up to, and how they are doing.  Given this fact, we cannot say that LPs are an overall good.  It is certain that they have done some harm.  Many patients live on disability pensions, or small, fixed incomes, and can barely afford food and housing.  Are these the people that members of the CMCIA imagined they would be having as clients?

Question Three/Four:  How should we define medical use, and how should we move beyond our experience-based system to a more evidence based medical system?

On the first point, cannabis-based medicines are used primarily for chronic illnesses, and, so far as I can see, the lists that both dispensaries and LPs in Canada use to determine eligibility work well enough.  As Doc Hepburn suggests, a central difficulty lies in the fact that Canadian doctors have yet to join this conversation.  So few understand it.  The second point is problematic.  Why do only some patients with seizure disorders respond to cannabis treatment?  Why do some relapse?  Why do some patients with cancer respond to cannabis treatment and not others?  These are life and death questions, answerable, perhaps, by ongoing, formal research.  At least one should try such research.  But research is expensive.  Who will fund it?  On Thursday evening, none of us seemed to know.  Should doctors ever come fully on board, they may have workable suggestions.

Thus ends my commentary, curmudgeon-like, and perhaps a tad out of step with, last Thursday’s vibrant, intelligent and civilized discussion, led by well-informed and well-intentioned planners.   Perhaps my corporate nightmare will fade in the light of the Liberal Party of Canada’s new regulations for the cannabis industry, and the majority view of LP employees will be generous in reaching across to dispensaries, unlicensed growers, and unlicensed medicine makers.  I’d like to see one more forum of this sort, this time focused only on the question of a mutually acceptable plan.  That forum would allow us to move deeper into the subject matter, and closer to seeing if indeed, we can create trade, and not war.