Deprecated: The $control_id argument is deprecated since version 3.5.0! in /home/oq5ayjaeetjt/public_html/wp-content/plugins/elementor/modules/dev-tools/deprecation.php on line 304
 The Time I was a Judge for a Cannabis Cup - Cannabis Digest
Skip to content

When I heard that a 15,000 person festival venue had been built just ten minutes from my house I was very excited. Small communities like Lake Cowichan that have long relied on extracting natural resources like old growth lumber seem now to be investing in tourism, using there still beautiful temperate rain forests as a lure to the masses escaping the grey monotony of city life. Another industry moved in as the logging moved along and that is the Cannabis industry.

So, when I heard that Laketown Ranch’s 2nd major event would be the Legends Valley Music Festival and Bio-Cup , Canada’s first Music Festival / Cannabis Expo collaboration, I was very excited and contacted them right away. I have attended or participated in many of BC’s finest underground music festivals over the past decade including leading Harm Reduction teams at Shambhala, and DJ’ing for the Entheos series along with my friends at Returning Saturn. 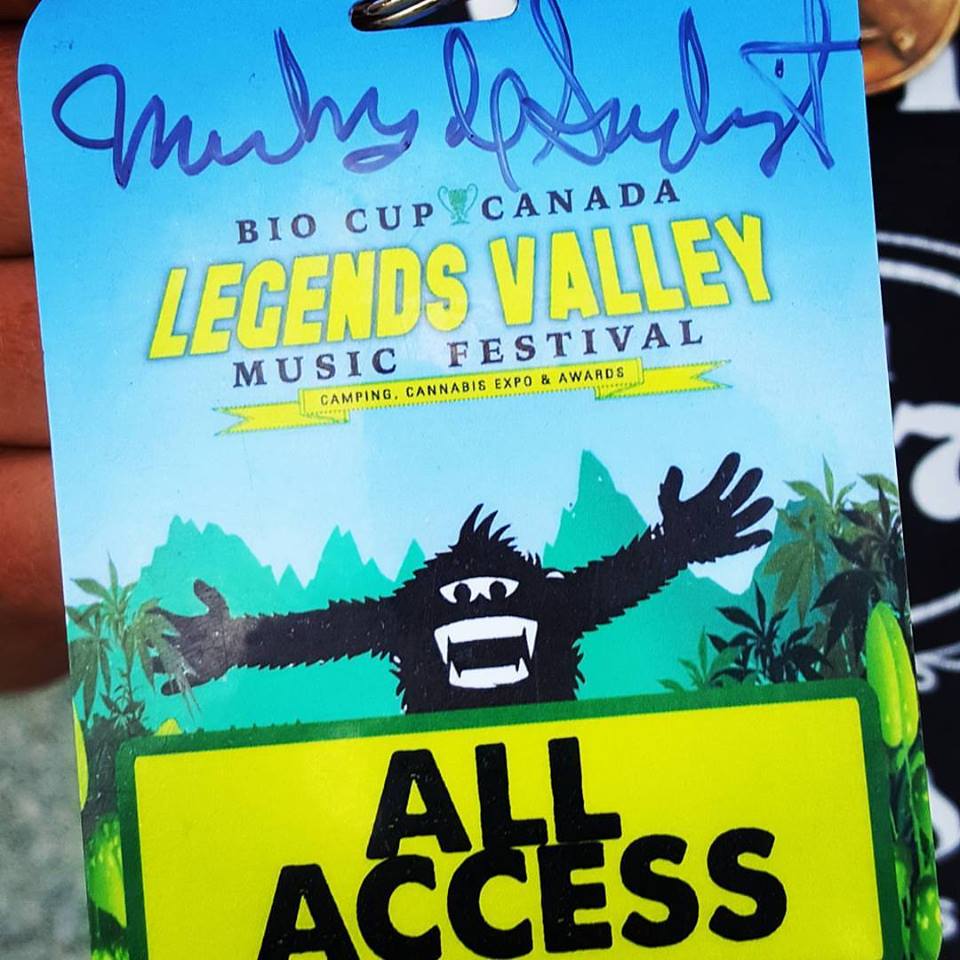 The musical acts were already booked at that time: Sublime with Rome; Mat the Alien; Five Alarm Funk and the Librarian among the big draws. No harm reduction station would be needed for the cannabis consuming population or the beer gardeners. I was however invited to join the speaker segment of the Bio Cup and to my glee, be a celebrity guest Judge.

I don’t know how all the other Cannabis Cups are organised, as this was my first Judge experience, but it was as exactly what i had imagined. The day I arrived I was handed a hefty bag of samples including around 30 grams of bud; 20 half-gram samples of extract and numerous edibles and topicals. I was given a small scorecard indicating the categories: Sativa, Indica, Hybrid and CBD. The samples had a label indicating the category as well as an identifying number code. This made the test blind to any personal favourites I have from among the organizations that I generally support.

After my five years at the Victioria Cannabis Buyers Club testing new cultivars and recommending products to paitents, I developed a high personal standard for cannabis consumables. It is common that after becomming familar with a dispensary, individuals are soon so used to the impeccable quality of BC’s finest cannabis gardeners that they can no longer go back to the swag they once smoked. This was true for me.

Perhaps this is why I found judging around 30 samples of flower more difficult. From among the flower samples only a half dozen were up to my normal standards. While many looked and smelled great, too many felt rough on my throat or left a bad taste in my mouth when smoked. Some I would have brought back to the dispensary to trade in for a better option. 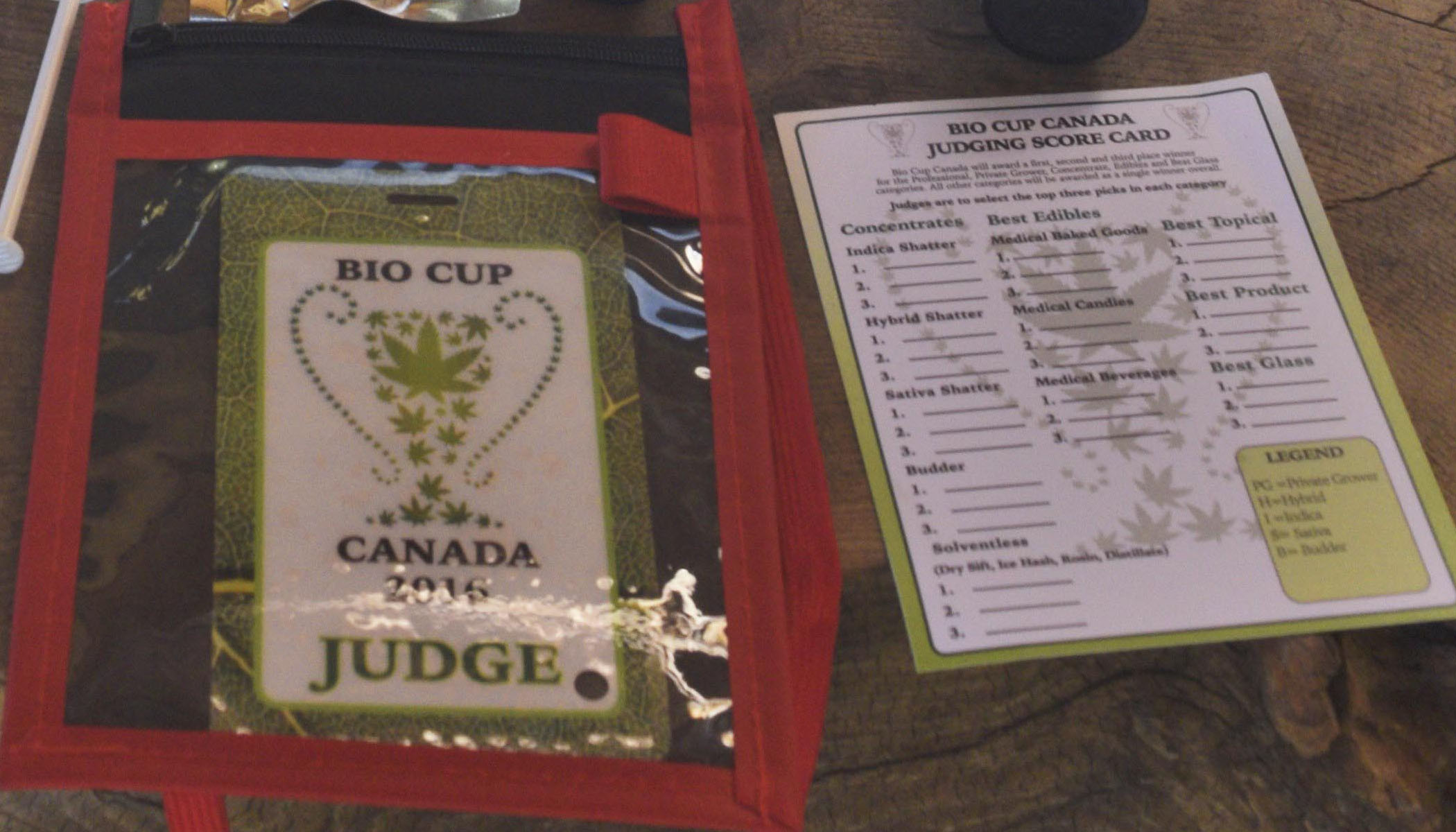 Fortunately I had a small team to help correlate results. While we often found our first choice to be the same, second and third place took more hashing out. Having not been told a specific method of evaluating the samples, we took it upon ourselves to create a system. Each strain was given a score for Visual, Olfactory, Dry Toke Taste and Smokability and then the results were added and compared. We left out a score for Effect because of the limited time we had to endure that much cannabinoid.

Multi-hour sessions were spaced out by wanders around the festival where I danced, contact juggled and spoke with edibles and extract vendors about my Supreme Court of Canada case and gave appreciation for the services they offer. The expo was large enough that I didn’t get to see everything. The celebrity judges all met to discuss the samples at one point during the weekend but I was either peeling over samples and scoresheets at my camp or deep in discussion at one of the booths.

The edible and topical entries were still in there original labels and so did not free me from my personal biases toward vendors who I think are generally great. I included the labels in my judgement for these products by favouring those that included mg. doses; safety precautions and clean design. I managed to taste and texture test the edibles all in one night, giving me a very pleasent sleep.

One of my campmates who creates an array of non-cannabis infused topicals and aromatherapy tools helped me evaluate the skin creams and balms. After learning about the medicinal uses of topical cannabis treatment and the magic of cannabis terpenes over the weekend, she is now interested in exploring this plant herself. 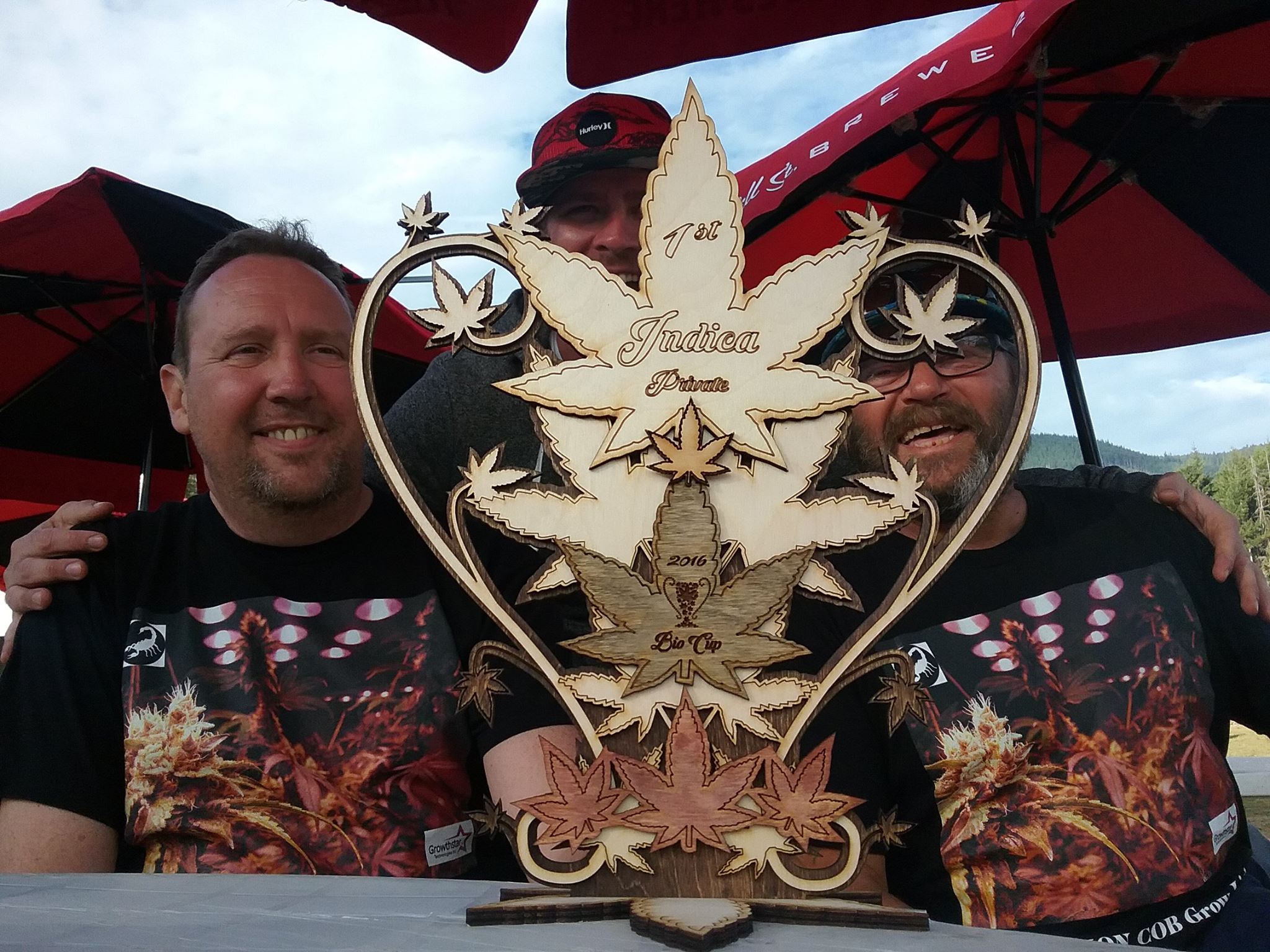 When the winners were announced by Randy and Mr Lahey from the Trailer Park Boys, I noticed how different some of my edible and topical choices were from the general consensus. I noticed during my work at the V-CBC how vastly different members opinions would be about the same product, so this didn’t surprise me. The winners were given elaborately laser cut wooden awards, but more importantly they had shown the cannabis industry that there products are the peoples choice.

The Legends Valley Music Festival and Bio-Cup was an ambitious and pioneering event spearheaded by BC Bud Depot. The cannabis expo was an island in the centre of the festival with beer gardens positioned around the two stages on both sides. Within the confines of the beer garden stage security asked each entrant specifically if they had any cannabis not to use it or even bring it inside. Inside there was a designated smoking area and security watching from the stages.

While I have never seen a cannabis expo in a Music Festival, I have also never witnessed such stringent anti-cannabis security measures. Cannabis is a safer alternative to many other experience enhancing substances, some of which I was offered in the cannabis exclusion zone. The security were friendly however and one gentleman accepted my humble gift of a bag of infused Granola, saving it for after his shift.

I enjoyed my time at the Legends Valley Bio Cup Canada Cannabis Music Festival and I would certainly attend next year although I probably won’t ask to be a Judge. The experience has inspired me to work toward creating another slightly different cannabis/music gathering. I picture an atmosphere that maintains the diversity I have come to expect from a music festival while becoming transparent and forthright about the prevalence of cannabis use. It would be smaller and tucked further into the forest, the music would go later and the premises would have a more amicable security detail and no beer garden. There would be a full line up of workshops and speakers.

This was the first of what I imagine to be a great many cultural happenings to come from the emergent cannabis community. A huge congratulations and thanks to those that helped create this historic event.

(EDITOR UPDATE – THIS EVENT HAS BEEN CANCELLED)   With the federal government getting ready to introduce legislation this spring to legalize cannabis sales, a wide range of issues deserve public discussion.  Over the next three months, the UVSS Hempology 101 Club and the BC Independent Cannabis Alliance will be hosting 3 debates at the […]

Some of the top stories this week in Canada revolve around whether or not doctors should be prescribing cannabis for medical purposes in this country. The Canadian Medical Journal published two very opposing views on the topic this Monday. Both  CMAJ commentaries quibble over relative harms, burden of proof, and the relative lack of clinical […]