Deprecated: The $control_id argument is deprecated since version 3.5.0! in /home/oq5ayjaeetjt/public_html/wp-content/plugins/elementor/modules/dev-tools/deprecation.php on line 304
 Vaporizer Basics - Cannabis Digest
Skip to content

Why use a vaporizer?

Part of the new wave of 21st century cannabis use is the proliferation of vaporizers. A vaporizer is a device used to heat plant material without combustion to extract its volatile oils. Initially vaporizers were used for aromatherapy, but they have since been redefined for use with medical cannabis. “Vape” was the Oxford English dictionary word of the year in 2014 and vaping is quickly becoming a popular alternative to smoking for people seeking to receive the benefits of inhalation.

The main benefit of choosing to inhale a medicine is an almost instant onset of effects. This is especially helpful for unpredictable spikes in pain or other conditions that have a severe and sudden onset. As a child I was prescribed a ventolin inhaler to deal with acute bouts of asthma.

With inhalation the effects are short lasting, peaking within half an hour and trailing off. When we take a pill or eat a cookie, our stomach breaks down the compounds slowly into our bloodstream over many hours. The longer duration of effects is ideal for sleeping through the night; where a vaporizer may be helpful to get out of bed in the morning. 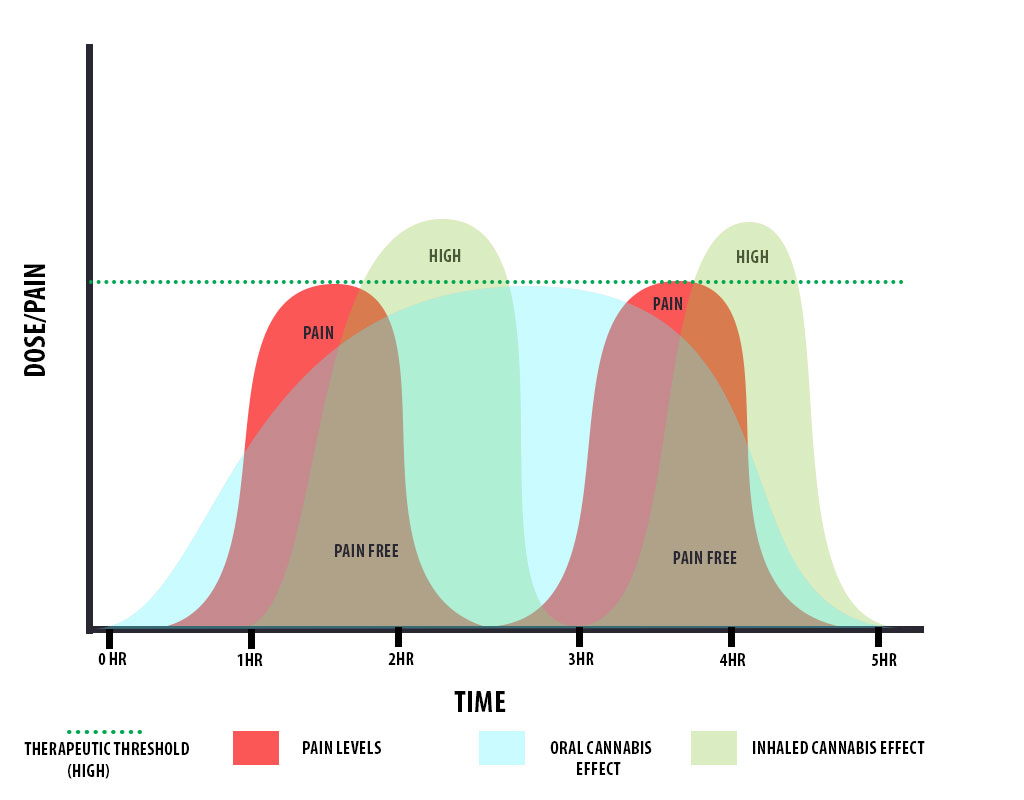 The chart illustrates this idea. A generalized pattern of fluctuating chronic pain is overlaid with the release of medical cannabis when eaten and inhaled over an eight hour period. When pain levels rise, at certain times exceeding the relief threshold provided by an edible, a small amount can be inhaled to complete the treatment. 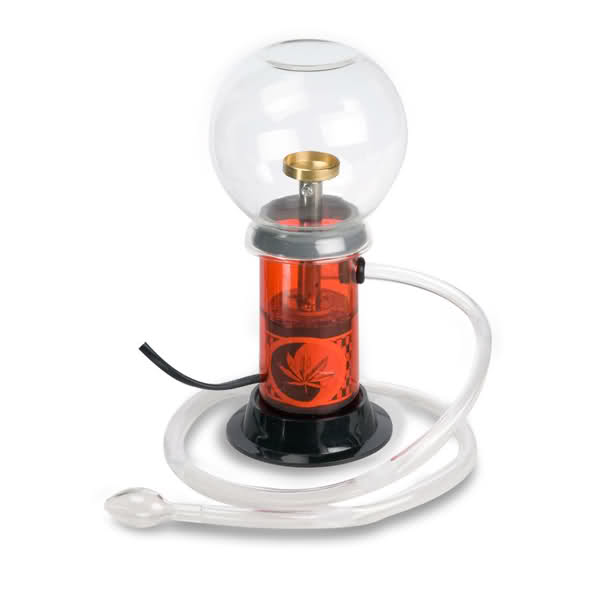 The first vaporizer I ever used had a small hot plate that heated the ground-up herb inside a glass jar with a tube and mouthpiece. You would turn the vaporizer on until you could see and taste the vapor and then turn it off before the herb began to toast, repeating this process. The most recent vaporizer I have tried, almost 15 years later, the Pax, is a discrete, portable, rechargeable single-unit, “A vaporizer worthy of Batman”. With temperature controls and L.E.D. indicators, you need only wait for the green light and push the button when you want to inhale.

It can be challenging to keep up with the evolution of vapor technology as some models work not only with dried herbs but oils, concentrates and glycerin based extracts. E-cigs have exploded in popularity as people seeking alternatives to tobacco. These products are not always compatible with medical cannabis use. Vaporizers reduce the impact and consequent social concern associated with inhalation as there is very little odor produced than when compared with cannabis smoke.

Head shops and Vapor lounges are available in some cities as a place where patients can become oriented to the selection of vaporizers and how to use them. At dispensaries like the V-CBC in Victoria, vaporizers are sold and staff as well as other medicinal users are happy to show newcomers the basics. In the V-CBC vapor lounge there are charts to help patients learn the finer details in order to target the particular cannabinoids they desire. The temperature gauges of vaporizers have varying degrees of accuracy, and some less sophisticated models require the user to pump the heat instead of sustaining it to avoid combustion.

Conduction vaporizers have been around longer and are generally less expensive than convection models. Convection vaporizers either use a fan or pump to force the air through the heating element and herbs, or just rely on the users inhalation to draw the air. Some Vaporizers come with a long tube and mouthpiece while others fill a bag that is then inhaled by the user.

From the simpler conduction models of the 90’s, there continues to be a steady evolution of vaporizer technology with advanced handheld devices and more precise temperature gauges. Here is an instructional video from Licensed Producer Cannimed, who have a contract with Storz & Bickel to provide patients with the Volcano Medic Vaporizer, which offers “reliable and reproducible method for the administration of THC” (Abrams 2007, Zuurman 2008).

Last thursday we heard the news that my medical cannabis extract decision has once again been appealed by the Canadian Government. It is now destined to become the first case to present evidence regarding medical cannabis to the Supreme Court of Canada. The supreme Court does not typically accept new evidence and the government has […]