Deprecated: The $control_id argument is deprecated since version 3.5.0! in /home/oq5ayjaeetjt/public_html/wp-content/plugins/elementor/modules/dev-tools/deprecation.php on line 304
 Cannabis Extracts throughout History: Part 1 - Cannabis Digest
Skip to content 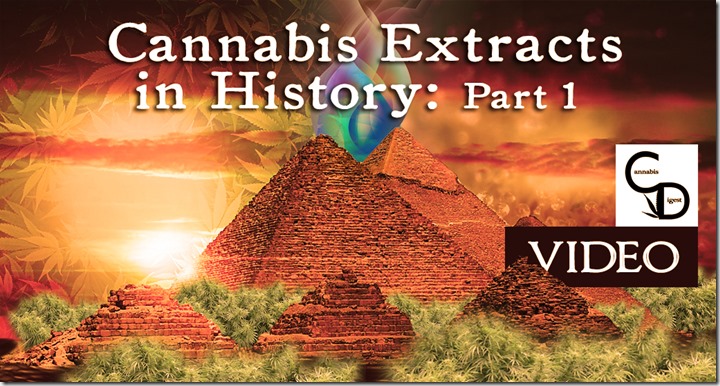 In order to advance our understanding of the potential of cannabis as a medicine, it is helpful to look back through history at the many times and places that this plant has emerged into the local materia medica. Cannabis may be set for an archaic revival as modern science is now exploring the neuroprotective qualities discovered by emperor Shen Nung close to 4500 years ago.

This Article is complimented by short videos made by myself and Ted Smith to accompany his Textbook, Hempology 101: The History and Uses of Cannabis Sativa. You can find sources for all of the references to ancient texts that mention cannabis extracts here.

Shen Nung (the patron of pharmacists) may well have been a creation of Chinese folklore, as the Pen Ts’ao was compiled from ancient fragments around 150 BCE, however the recent archaeological discovery of a site of “789 grams of dried cannabis […] buried alongside a light-haired, blue-eyed Caucasian man, likely a shaman of the Gushi culture, near Turpan in northwestern China” dating back three millennia, adds credence to his legend. The Pen Ts’ao shares that “hemp grows along rivers and valleys at T’ai-shan, but it is now common everywhere.”

With wild cannabis growing in abundance, ancient medicine makers began to develop basic techniques to separate the desired ingredients from the crude plant matter. In the extensive review, History of Cannabis and Its Preparations in Saga, Science, and Sobriquet, Dr. Ethan Russo determines three categories of herbal cannabis: Bhang, Ganja, and Charas. Bhang is referred to as a mixture of flower, seed, leaf, and stalk; Ganja is the manicured, seedless, “feminized,” “sensimilla” flower buds alone; and Charas is resin collected by simple techniques, commonly known as hashish. Ancient methods of gathering Charas include washing or beating the plant over fabric screens, or just rubbing the plant to gather the resin on one’s hands or body.

Cannabis before the Common Era

Clay tablets found in the ancient city of Nineveh represent the collected medical knowledge of the first two centuries BCE in Mesopotamia. These document the early use of cannabis or A.ZAL.LA as an anticonvulsant taken orally, cutaneously, and as an enema. These ancient doctors utilized all parts of the plant to treat an extensive list of conditions from impotence to nocturnal epilepsy. In nearby India, an early Ayurvedic text, the Atharva Veda, exalts cannabis or bhanga as one of five herbs employed “to release us from anxiety.” The ingredients of the legendary Vedic holy drink Soma are hotly debated among academics. Author and historian Chris Bennett supplies compelling evidence for the inclusion of cannabis in his book Cannabis and the Soma Solution.

Cannabis drinks have been popular for tens of thousands of years. Chris uses archaeological and etymological evidence to illuminate cannabis as a consistent ingredient in ritual beverages—techniques advancing from ancient times when the oil from the seeded flowers of wild cannabis were crushed and pressed after becoming enriched with the oil soluble cannabinoids, to advanced techniques for cultivating feminine cannabis and extracting the cannabinoids into forms of hashish. 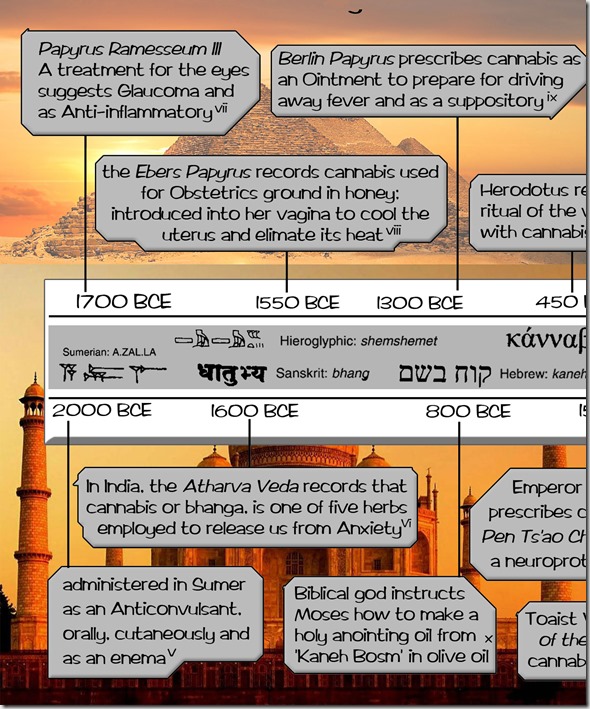 The Perfume of the Pharaohs

In Ancient Egypt, incense cones of Kyphi (kief hash loaded perfume) placed on the head would melt in the sunlight and by body heat releasing fragrant cannabis onto the skin. (WATCH THIS VIDEO)  In 2002, scientists from L’Oreal and C2RMF recreated the “perfume of the pharaohs” which included pistachios, mint, cinnamon, juniper, cannabis, and myrrh. French researcher Videault noted, “Kyphi will never be sold because some of the ingredients are illegal substances. In any case the smell is probably much too pungent for the modern world.”

It is still common in Egypt to use steam distillation to produce a cannabis flower essential oil rich with therapeutic terpenes as a scent for perfumes, cosmetics, soaps, and candles, and to add sweetness to baked goods and candies. The essential oil is anti-fungal and can also be mixed with water and sprayed onto plants for protection. Although the varieties of cannabis used in today’s products are low THC, this method could be applied to medicinal grade cannabis.

Egypt provides us with rich insight into the medical practices of the ancient world from the extensive papyrus that have been discovered and decoded. Three notable entries from the second millennium BCE are the Papyrus Ramesseum III: “A treatment for the eyes: celery; hemp is ground and left in the dew over night. Both eyes of the patient are to be washed with it early in the morning.” This could have been used to treat glaucoma or for the anti-inflammatory effects. The Ebers Papyrus records cannabis used for obstetrics: “ground in honey; introduced into her vagina to cool the uterus and eliminate its heat,” further suggesting anti-inflammatory properties. The Berlin Papyrus prescribes cannabis as an “ointment to prepare for driving away fever” and as a “plaster.”

Although our translations of these ancient writings are subject to speculation, it is clear that the knowledge of this medicine was widespread throughout Ancient Egypt. It is a curious note that Moses, the leader of the Hebrew people, receives the recipe for a holy anointing oil containing large amounts of cannabis or Kaneh Bosm soon after leaving Egypt. The highly revered anointing oil is later applied topically by Jesus and his followers to fight epilepsy, skin diseases, eye, and menstrual problems. (ANOTHER SHORT VIDEO)

Greek historian Herodotus wrote detailed accounts of Scythian vapour hotbox rituals around 450 BCE. “First they anoint and rinse their hair, then for their bodies, they lean three poles against one another, cover the poles with felted woollen blankets, making sure that they fit together as tightly as possible, and then put red-hot stones from the fire on to a dish which has been placed in the middle of the pole-and-blanket structure […] the Scythians take cannabis seeds, crawl in under the felt blankets, and throw the seeds on to the glowing stones. The seeds then emit dense smoke and fumes, much more than any vapour-bath in Greece. The Scythians shriek with delight at the fumes.”  (SLIGHTLY LONGER VIDEO)

This is only the start of a four part journey through the history of Cannabis Extraction.  Stay tuned to the Cannabis Digest Blogs and watch out for Part 2 by Owen Smith next week.

By Ted Smith On Thurs May 14, 2015, the Victoria City Council is expected to formally request city staff to prepare bylaws to license medical cannabis dispensaries.  While the vast majority of local citizens have expressed support for this development, a local consultant has decided to jump into the fray with a letter so biased […]

End of the Inquisition? Cognitive liberty, adult sovereignty, and the legalization of cannabis Graham Hancock is the author of the major international non-fiction bestsellers The Sign and the Seal, Fingerprints of the Gods, The Message of the Sphinx, Heaven’s Mirror, Underworld and Supernatural, and of the epic adventure novels Entangled and War God. His books […]