Deprecated: The $control_id argument is deprecated since version 3.5.0! in /home/oq5ayjaeetjt/public_html/wp-content/plugins/elementor/modules/dev-tools/deprecation.php on line 304
 The Ugly: Dissecting the Canadian Cannabis Task Force Report - Cannabis Digest
Skip to content

A report on legalization given to the Canadian government is profoundly disappointing for patients, shoving sick people aside in the zeal to cash in on profits and taxes.  In this report, which I should stress are not binding, the task force recommends less access with the removal of caregivers, no tax breaks and vague, weak language about pricing that leaves patients with little hope.  While there are many good recommendations and the task force seems to have a grasp of many aspects of legalization, the failure to provide any significant benefits to patients fouls this report.

Before I go further, I should stress that these are just recommendations and not actual law.  The law will be entered into Parliament in Ottawa in the spring of 2017 and many fear it will be far more conservative than this report.  No doubt every stakeholder likes some parts of this report and strongly disagrees with others.  There will be a great deal of pressure exerted by some special interest groups to dramatically change the direction the document suggests we take.

Legalization would not be happening in Canada or the United States if it were not for the wide range of substantial benefits cannabis provides to patients, along with their fight in court and on the streets for access to this medicine.  Court battles have been fought, medical cannabis dispensaries established and many stories have been shared to bring light to this amazing medicine.  The companies anticipating access to the legal market in Canada would not even exist if not for the current medical program.

However, patients are getting thrown under the bus with the proposed guidelines for legalization this task force just put out. The government task force clearly feels that people will find ways to get a doctor to sign a license to use cannabis if there are potential advantages, like lower prices, less tax or opportunities to grow.  By making patients pay equal amounts for cannabis as recreational consumers, legalization appears to have no real advantages for those that need the help the most.

Just to be clear, when I say patients, I mean each and everyone of us except those lucky enough to just drop dead one day with no pain.  Almost everyone is a patient at some point in our lives and so when I say patients will suffer if these recommendations are implemented, what I really mean to say is we all will suffer.

“The Government will need to work closely with licensed producers and patients to identify and address emerging issues and take decisive action if required, whether requiring licensed producers to prioritize supply for medical users or establishing price controls for medical users. The Government should take the necessary steps to have the authority to regulate these issues moving forward, while being mindful that executing these authorities may create the potential for market distortion and exploitation as individuals seek to benefit from perceived advantages in the medical regime.”

Most Licensed Producers will likely have little to do with patients once they have access to the much larger recreational market.  Governments will be hard pressed to find ways to force them to put herb aside for patients, grow special strains or produce specialty products like suppositories and salves.  Profits are the motivation of these companies and patients will find little sympathy in that.

For many patients, like my lover Gayle Quin who just died of cancer a few months ago, the option of growing your own medicine is physically impossible.  Being forced to purchase all of the cannabis medicines she needed to stay alive would have cost us at least $200 per day for the last two years of her life.  Thankfully she had a license to grow her own medicine and others with their own gardens pitched in what they could afford, or she would have died much sooner. These proposal are a dismal failure for patients like her for many reasons.

Proposing to take away the opportunity to have a designated grower provide medicine is a quick death sentence to some patients and a huge blow to the gut for others.  How could any rational, caring person suggest that patients that are losing the battle to stay alive must give up their garden when they can no longer physically maintain it, forcing them to purchase every gram they use?  Yet that is what this task force has done, claiming that a magical unicorn will appear to protect patients’ access.

“However, the Task Force believes that the Government should respond to the concerns expressed by municipalities, law enforcement officials and community members by immediately reviewing the current risks associated with designated production and the ongoing need for such production. There should be a sufficient range of options available to patients in the future to easily access cannabis for their medical need. The majority of Task Force members believe that the problems with the activities of some designated producers are serious and that the Government should determine an appropriate timeframe for phasing out this provision as the new system for non-medical uses of cannabis is established.” 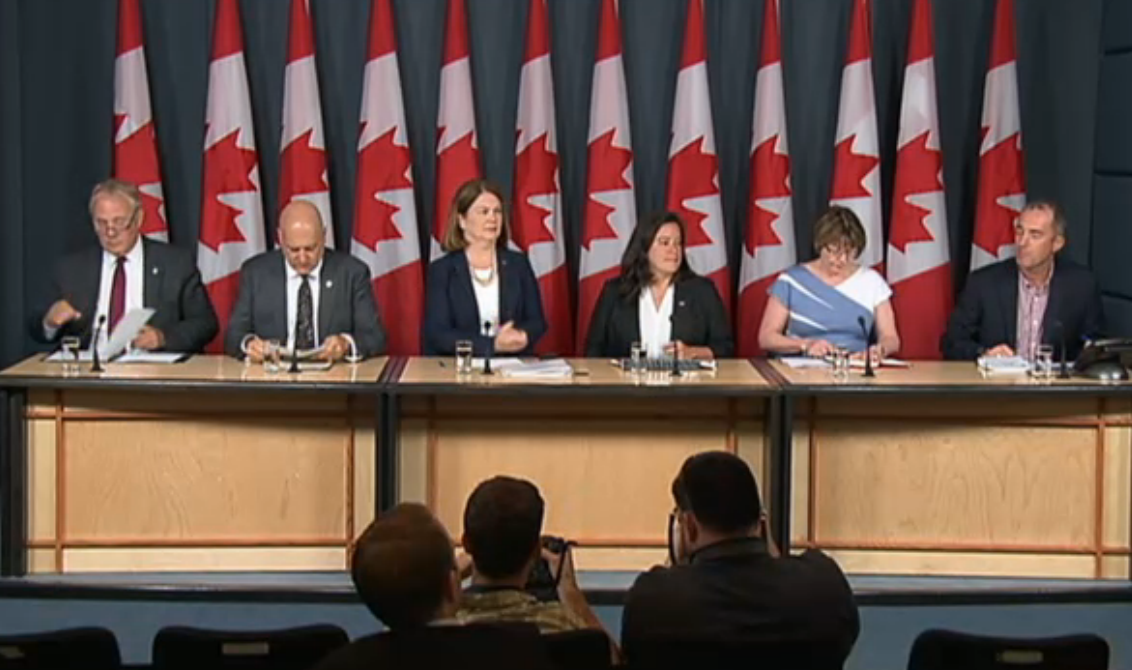 These proposals completely fail to recognize any use of cannabis in palliative care.  Instead of encouraging pilot projects for patients who wish to use cannabis towards the end of their lives, the task force only proposes more research is done in very general terms.  This is the same Liberal government that promised research when the medical access programs were first brought into effect in the late 1990’s, but has done almost nothing then or now to actually see that research is done.  Little clinical research is being done in Canada on cannabis products right now, in part because the drug approval process has been thwarted by court decisions and the government does not conduct any research of its own.

This report could have been an opportunity for the task force to advance the development of many health products that contain little to no THC.  To the great dismay of farmers, patients and advocates, though, the task force makes only weak statements about what other areas of government might be doing on this issue.  Just more proof this government only has a limited understanding of the potential benefits of cannabis and that their collective fear of this plant still stops many from openly embracing it.

“Some companies may wish to market cannabis products as “wellness products” rather than as medicines. We understand that the federal government is currently conducting a review of its approach to the regulation of natural health products. The question of CBD or other non-psychoactive cannabinoids as potential wellness products is likely to be explored in this review process and will be informed by emerging research in this area.”

With a great deal of pressure from the Canadian Medical Association to remove the medical cannabis program entirely, the task force is using legalization as an excuse for withdrawing important components of the current medical program while offering no concrete benefits.  These proposed regulations are a step back for patients, treating them with suspicion rather than compassion.  While the rest of the report deserves credit for proposing some progressive recommendations, everyone should be concerned what will happen to patients if these suggestions become law.

Cannabis Digest is happy to bring you weekly episodes of the Cannaisseur with Caelan Walton, but you don’t have to wait, visit the youtube page for more videos. Single Batch Cannabutter Extraction Tutorial – Episode #1   https://www.youtube.com/watch?v=0KswXYZLEw8 In the first episode of The Cannaisseur I’m going to explain how to extract cannabutter for use […]