In the evening of Weds Sept 2, 2015, the International Hempology 101 Society will be celebrating 20 years of activism in Victoria with its annual march from city hall to the BC Legislature.  Activists from around the region are expected to join hundreds of local supporters, as few cannabis organizations have survived this long.  With so many positive steps towards legalization around the world, there are many reasons for the cannabis community to both celebrate and keep pressuring the government.

Having led the organization for two decades, this is a huge personal milestone for me.  When I began my cannabis activism, many were skeptical that legalization would ever be possible. After 20 years I could not be more positive about the future of cannabis.

Hempology 101 actually started in Vancouver in Nov 1994 under the leadership of Danna Rosek, then manager of Hemp BC.  I attended my first meeting in Jan 1995 and quickly realized the importance of cannabis.  After getting to help organize the first 420 at Victory Square, at which I got to be Master of Ceremonies, I struck out to Victoria to expand the activist network to the capital of the province.

The previous year I had graduated from Wilfrid Laurier University with a philosophy degree (very close to an economics degree, too), and travelled to the west to write books and help the world become a better place. Very soon after realizing the large farming family I came from had been deceived by large corporations, I decided to write a book to share the complete history of this incredible plant.  It was clear to me that cannabis was the key to solving many of the problems the world was facing, and that it was critical to my own health and well-being.

Starting with weekly Weds night meetings in Sept 1996, over the last 20 years I have attended or organized about 3,800 rallies, lectures, board meetings, Team 420 events, 420 circles, conferences and marches.  Next month I will write blogs with some personal favourites, as many of these events have been remarkable experiences.  Our group has done everything from hotboxing the front of various government buildings while singing cannabis carols, to playing the world’s only cannabis gameshow, REACH FOR THE POT, in the inner harbour, to giving out free pot cookies at the public library on International Medical Marijuana Day. 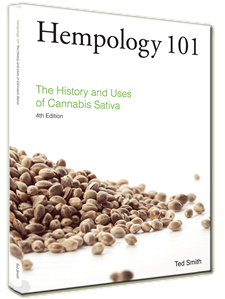 The textbook has been printed 4 times. The first three editions were limited printings of 100, all on hemp paper and bound by hemp twine made into a tight braid to bind it together.  In 2015, a beautiful, commercially produced edition was finally made available to the public.

Meanwhile, the society started printing a newsletter in 2003 that has now grown into the largest print cannabis publication in the country.  The Cannabis Digest newspaper is shared from coast-to-coast in Canada, providing readers with important information about legal battles, political movements, compassion club developments and how the medical establishment is handling the situation.  Spreading 10,000 copies across the country four times a year, the Cannabis Digest is the pride and joy of our organization.

Of course, along the way I have founded the Victoria Cannabis Buyers Club in Jan 1996.  Now the oldest medical cannabis dispensary in the world, the VCBC is proud to have supported its former head baker Owen Smith over the past 6 years as he fought his way to a massive victory for patients at the Supreme Court of Canada.  Turning the club into a non-profit society in 2012 was a dream come true, and a great weight off my shoulders.  When the city of Victoria gives it a business license in the near future there will be a large celebration. 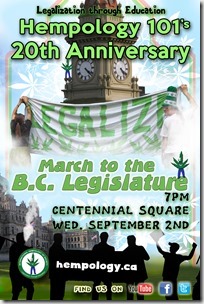 The march to the Legislature on Weds Sept 2 to mark the 20th anniversary of Hempology 101 in Victoria is going to be the perfect way to celebrate all of these years of cannabis activism.  With so much momentum towards legalizing cannabis happening around the world, many are excited about the possibility of living without fear of being arrested for smoking a joint or, even getting involved in the emerging legal cannabis industry.  It will be a night I will not forget.

The march starts at 7 pm at City Hall.

Ted Smith One year ago this month it seemed cancer was taking the life away from one of the country’s most dedicated activists, my love Gayle Quin.  While she has not recovered to her former self, there is still a faint hope that between cannabis and other medicines we can bring her back to the […]