On October 19, 2015 Canadians will vote in the most important election in the history of cannabis in Canada.  NORML Canada is usually non-partisan.  We are proudly non-partisan.  However, this election is different.  In this election the Liberals are formally supporting cannabis legalization.  This is a bold, unprecedented position for a major party to take going into a general election.  The Liberal position stands in sharp contrast with the Conservative Party and the New Democratic Party.  NORML Canada believe we have to support the Liberals not just to get them elected and bring about legalization, but also as part of a longer term strategy to show all the parties that they ignore the cannabis vote at their electoral peril.

How different is the Liberal position from the other two major parties?

The Conservative Party brought us the expensive, knuckle-headed, mean-spirited, and unconstitutional mandatory minimum sentences.  This is a significant step backwards in cannabis policy.  This is also the party that seeks to permanently end personal growing.  This is the party that says cannabis is not medicine.  This party would, if they could, put us all in jail.  The reason they want to put us in jail is not because they hate cannabis.  They know nothing about cannabis.  What the Conservative Party knows about cannabis would not fill a joint.  They want to put us in jail because they think it will get them re-elected.  They think there are votes in an anti-cannabis policy.

The NDP are traditionally a progressive party on cannabis.  Unfortunately, under Thomas Mulcair, they claim cannabis legalization requires more study before we can legalize.  Cannabis and cannabis prohibition have been studied plenty.  Have a look at the 650 page Senate Report on Cannabis by Pierre-Claude Nolin if you have doubts.  The NDP knows better.  This is a shabby, tactical decision in which the party has apparently concluded they cannot get elected by taking a strong, progressive policy on cannabis legalization.  The NDP do not deserve your vote.  They should be punished for their weak, craven policy.

You could say that the bad have never been so bad, the weak never so weak, and the good never so bold and promising.  Simply put, the stakes have never been so high and the choices never so stark.  It is for these reasons that NORML Canada has decided to support the Liberals in the 2015 election.  We know that the Liberals might change their mind once elected and not implement legalization.  We know that there are many other Liberal policies with which our members might not agree.  We do not agree with everything the Liberals stand for.  However, on the one big important issue we agree whole-heartedly. 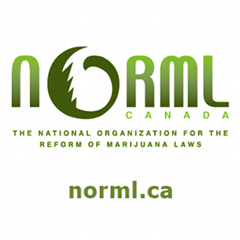 By supporting the Liberals we are helping to bring about legalization.  That is our short-term plan.  We also have a longer-term goal of influencing cannabis policy in Canada.

We have concerns about the laws that might be enacted under a legalized regime.  Will legalization include personal growing?  Will punitive rules be applied to the cannabis industry and the cannabis consumer?  We do not know.  Legalization is only the first step.  We want prohibition replaced with fair and just laws.  In order to achieve that goal we want all the political parties to believe they have to cater to the cannabis vote.  We want them to fear the cannabis vote.  We want to become the Canadian cannabis NRA.  Unfortunately, in order to sway politicians, we need more than just good arguments.  We have had those for a while.  We have to recognize the reality of party politics: political parties do what is in their best interests.

We have been working on an election project intended to achieve these short and long-term goals.  There are a number of different components to NORML Canada’s election project: http://norml.ca/election/ 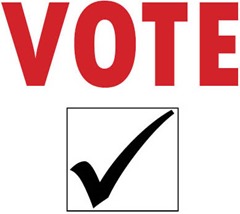 Get Out The Vote

This is the most important facet of the election project.  It is critical that cannabis people vote in this election.  We are all going to vote and we are going to encourage our family, friends, neighbours, co-workers, hockey-buddies, and band-mates to also vote.  NORML Canada is going to work hard to make sure everybody votes.  To that end, we are gathering names / emails / postal codes for a get-out-the-vote push during the week before the election.  During the week before the election we will politely and courteously remind everyone where and when to vote.  We will assist with any questions about voter registration.  In some ridings we may be able to assist with transportation.  We will remind everybody as to the positions of each of the parties on cannabis legalization.

In order to proceed with the get-out-the-vote campaign we must gather the names / emails / postal codes.  We need the postal codes as that will help us know where you are and where you will vote.  We will keep your information private.  Nobody gets access to our databases.  We began this process at the 420s and GMMs.  We will be reaching out to cannabis shops and dispensaries across the country – asking them to help us gather the get-out-the vote information.  We ask those reading this to go to our web site and enter your information.  The Conservative Party and the NDP think that cannabis people and young people don’t vote.  We are going change that. 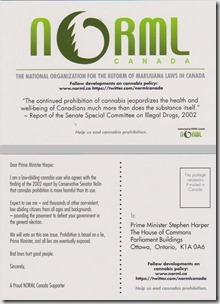 We have created postcards addressed to Stephen Harper that we are disseminating across the country.  The postcards tell Mr. Harper that the sender of the postcard will be voting on this one issue and will be pounding the pavement to defeat the Conservatives. There is no postage required in order to send mail to a sitting MP.  People who agree with the postcards need only sign or print their name on the card and drop it in a mailbox.  This sends a message to the Conservative Party that their terrible cannabis policies will cost them votes on election day.

We are drafting bullets / talking points which will be made available to candidates who wish to better arm themselves on the cannabis issues.  The footnoted bullets will debunk a lot of the common myths surrounding cannabis.  We will show them that cannabis is a mild substance of low toxicity which can be used medicinally to heal both body and mind. 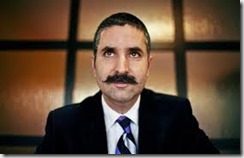 Thurs Jan 30, 2020 For Immediate Release Victoria, B.C.: In an unprecedented move to protect a compassion club, Victoria city council voted unanimously to request the BC Cabinet to grant an exemption to the Victoria Cannabis Buyers Club on January 9, 2020.  After being raided by the Community Safety Unit on Nov 14, 2019, the […]

Ted Smith Recently, I was presented with the Michelle Rainey Award by the community of activists on the <medpot.net> forums. Being the first recipient of this award is a huge honour for me. In fact, it is likely the most meaningful gift I have ever received. First off, the award was named after one of […]