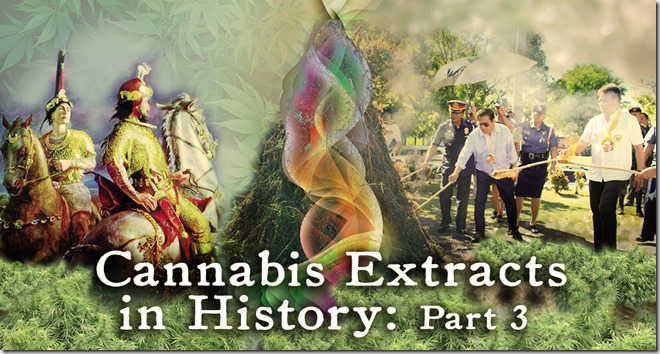 Cannabis in the Modern Era

In the second part of this series on Cannabis Extracts in History I looked at references from 1CE to the 17th century when cannabis began to emerge in the west as a prominent medicine. The modern era is dominated by prohibition. Check out this ‘History of marijuana law in the U.S.A.’ Graphic Timeline by Dr. David Allen and Cannabis Digest editor Judith Stamps new timeline on the Absurdities in the Drug War.

Our modern era war on cannabis has been declared a failure by successive teams of scientists from around the world(1). Criminal punishments have not effectively deterred individuals from seeking out this undeniably useful medicine. The DEA’s own Judge Francis Young concluded at the end of a lengthy legal process in 1988 that “Marijuana in its natural form is one of the safest therapeutically active substances known to man.”(2) I find it strangely ironic that modern day drug warriors celebrate a successful bust in the same manner that our primitive ancestors celebrated a successful boom, by openly burning large amounts of cannabis.(3)

Politicians and physicians continue to address the issue with lacklustre, pointing to the problem of smoking and reciting the carcinogenic properties of burnt vegetable matter. It has become apparent on our historical journey that not only is cannabis a diverse and effective medicine, but that this has been well known by diligent individuals since time immemorial. With even the most basic of techniques, these individuals separated the active ingredients from the vegetative mass, averting these feared pitfalls, to create medicines superior to their modern synthetic counterparts.

With the recent BC Court of Appeal decision opening the door to patients who make whole plant medicinal cannabis extracts, the Canadian government has been given a year to adapt their regulations. Health Canada’s attempt to treat cannabis more like a pharmaceutical has been a slow and expensive process that leaves those presently suffering at a loss and in pain. The inherent difficulty in studying this complex and dynamic plant for the purpose of isolating and synthesizing patented products for the pharmacy lingers in the background of the Canadian Medical Associations’ lament for more research. For the great number of people who have an immediate need for a steady supply of cannabis extract, but can’t make it for themselves, the only options are a local dispensary or a compassionate caregiver.

Community dispensaries like the V-CBC are always trying to meet the diverse needs of their growing membership by focussing and expanding their product lines. The creation of seven different massage oil combinations (cannabis + Arnica, Comfrey, St. John’s Wart) has created an array of topical options for members seeking to treat circulation, respiratory, bone, deep muscle, nerve, and hormonal conditions. Publishing all of the methods and recipes online (4) has helped members make their own medicine as the demand for the club’s products expands.

Chinese medicine may be poised to offer unique insights into the use of cannabis in herbal remedies, recipes for which may stretch back thousands of years. Dr. Luc Duchesne, an Ottawa-based businessman and biochemist, wrote in InvestorIntel, “Chinese traditional medicine is poised to take advantage of a growing trend. The writing is on the wall: Westernised Chinese traditional medicine is coming to a dispensary near you.”

In the 1990s, scientists discovered the endocannabinoid system (5) and the receptor sites for THC in our brain.(6) In 2000, a study in Spain showed cannabis to “inhibit the growth of tumour cells in culture and animal models.”(7) With research breaking out in areas where cannabis laws are loosening, there is a great deal of anticipation as to the miracles of healing that phytocannabinoid therapeutics still has to offer.

23 U.S. states now have medical cannabis legislation, and the states of Colorado and Washington have legalized its use for adults. A wave of support has followed the revelation of cannabis as a treatment for rare forms of epilepsy in children. In my final blog on the history of cannabis extracts I will explore some potentials achievements for medicinal cannabis extracts in the 21st Century.

Hemp and the Founding of America

Ted Smith·July 22, 2015
There are no comments yet No comments

Cannabis Compliance in the UK