All of the impacts of the recent Smith decision in the BC Court of Appeal have not been fully understood and many questions remain.  While the lawyers debate about how the government will respond, there are a few points I would like to raise about how this case could change the course of Canadian cannabis history.  While I am far from a lawyer, breaking the law and studying case law have been things I have spent a lot of time doing.

There is first the question of whether the federal government will appeal this decision to the Supreme Court of Canada.  Since there was a dissenting judge, an appeal would be automatically accepted by the SCC.  For several reasons we would be very happy to go to Ottawa and argue this case, especially because the dissenting judges reasons were so weak.  Though this would delay the outcome, the decision by the SCC would likely clearly direct the government to legalize cannabis extracts for patients.

If the government does not appeal the decision, then it is expected that individuals facing criminal charges of cannabis extracts across the country will use R.v.Smith show the laws are unconstitutional. Unless Health Canada gets the nerve to try the case over, and this case showed they lack the expert witnesses to do that, then we will see cases being thrown out or suspended pending the final outcome of this trial.  Eventually the courts in each province will have to either follow Smith as binding or go through a whole new constitutional trial that will likely have the same outcome.

One fear some have is that Health Canada will simply choose to ignore this decision, not appeal and carry on like nothing has happened.  After all, this case is from the era of the Marijuana Medical Access Regulations, not the current Marijuana for Medical Purposes Regulations, and while the remedy states the government needs to amend the regulations, it does not specify which regulations.  As we have seen far too often in the past, Health Canada is very capable  of gross misconduct and negligence on this particular issue and it would not really surprise anyone if they tried something like that.

But there are several compelling reasons why Health Canada cannot simply wish this decision away. Patients using cannabis extracts have just been given legal protection to make their medicines for the first time ever.  Now they will be busy sharing their story and knowledge with the medical community, family and co-workers without concern for being exposed for breaking the law.  The genie is out of the bottle.  As more people learn to live longer and better using cannabis extracts there will be no turning back.

For patients currently protected by the injunction, this decision means they have the opportunity to medicate themselves without economic concerns, as the cost is dramatically less if you make your own medicines.  As long as the injunction holds, patients who had licences under the MMAR will benefit the most with this decision.

For patients refusing to inhale cannabis, this decision is a watershed moment.  Many elderly people diagnosed with serious medical problems are not interested in smoking cannabis and this decision finally gives them some options when it comes to plant-based cannabinoids therapies.  Children should not be forced to inhale if they require cannabinoids.  However these patients still face access issues unless they can find a compassion club like the Victoria Cannabis Buyers Club to help them.

Compassion clubs could not be happier with this decision.  In many ways, the best legal argument clubs now have to operate is that they provide access to extracts.  Until cannabis extracts are legally available to patients, medical dispensaries can use Smith like a shield.

Licensed Producers are also very happy with this decision.  Even before these judges handed down their ruling, LPs were constantly putting pressure on Health Canada to allow for the sale of extracts but they were firmly told it was not on the table.  With so much at stake, these LPs will be very interested in developing cannabis extract products for testing and sale, as they are very aware of how huge this market could potentially become.  These companies will be putting heavy pressure on the government to create regulations that are much more functional than the current MMPR seems to be.

There are some possible impacts of this decision that go far beyond the medical use of cannabis.  This decision could temporarily open the door for the possession, trafficking and production of cannabis extracts to be unenforceable by the police until such time as there is a legal supply for patients!  This might seem like a big leap, a huge jump, an outrageous conclusion, but there has been a situation just like it before that many will remember.

Marc Emery called his 2004 tour across the country the Summer of Legalization.  With the federal Liberal talking decriminalization, cannabis prohibition seemed doomed in Canada.  However, his tour, in which he smoked in front of police stations in every province, was not spurred on by politics, it was made possible by the Hitzig decision of Oct 2003. 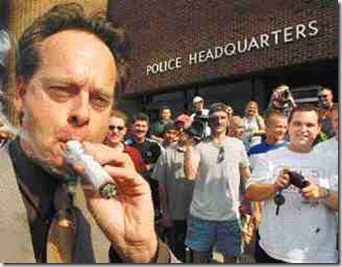 The Hitzig decision struck down several parts of the new MMAR, including informing the government that allowing patients to grow their own medicine or find a designated grower was not adequate.  The court instructed Health Canada to find a legal way to supply patients, essentially ruling that the possession laws were unconstitutional until that was done.  As possession cases started to get thrown out across the country, it became clear that there was no legal risk smoking in public and the worst the police could do was take it away.  That is why Marc struck out on his tour and why half the police departments did nothing about his stunt.  In those provinces he was charged, no court proceedings ever occurred.

This could be the Winter of Hash!  While no one plans upon touring the country with a hash pipe in their hands, it could become very obvious that this decision has crippled the crown’s ability to press cannabis resin charges until there is a legal supply.  The issue of standing, which the BC Court of Appeal considered very closely, makes it clear that no one can be convicted of an unconstitutional law.  It is very clear this is an unconstitutional law.  Therefore, whether you are a patient or not, feel free to walk around with a big chunk of hash or bag of cookies.  At least for now.

Previous article the Triumphant Return of Marc Emery, the "Prince of Pot"

Owen Smith·April 21, 2011
There are no comments yet No comments