Deprecated: The $control_id argument is deprecated since version 3.5.0! in /home/oq5ayjaeetjt/public_html/wp-content/plugins/elementor/modules/dev-tools/deprecation.php on line 304
 Holy Smoke! - 5 Faiths That Praise The Pot Plant - Cannabis Digest
Skip to content

Cannabis has grown and evolved alongside humans for thousands of years. Evidence has come forward that our relationship with the Cannabis plant dates back to (and may have even been a cause of) the neo-lithic revolution at the end of the last ice age. It comes from the Earth and provides us with everything we need to survive: Nutritious food, durable clothing, clean fuel, building materials, medication for almost every possible illness, and (for some) a path to enlightenment. Back in 2008, researchers in China found the world’s oldest stash of marijuana[1] cultivated specifically for psychoactive purposes. It’s no surprise that the cannabis plant has worked itself into many spiritual practices in ancient and modern faiths alike. So whether you ingest cannabis for medication or meditation here’s an (incredibly brief) rundown of 5 faiths that praise the pot plant.

Rastafari – Possibly the most well known cannabis-praising faith, the Rastafari way of life emerged in Jamaica in the 1930s. Followers, known as Rastas, are most easily recognized by their long dreadlocks and use of bright red, gold and green (representative of the first three chakras). They believe in the equality of all people and Jah as the holy trinity. Smoking herb or ganja (from Sanskrit ganjika) is used to cleanse, relax, heighten the consciousness and bring pleasure and thus bringing them closer to Jah, citing Revelation 22:2 “The river of life proceeded to flow from the throne of God, and on either side of the bank there was the tree of life, and the leaf from that tree is for the healing of the nations.”

Hinduism – In the Hindu religion, cannabis is thought to have been created of the god Shiva and has strong ties to the elixir of life. Bhang is a milky, spiced tea made from marijuana leaves and buds. Drinking of bhang is said to cleanse the body of sin and help the drinker to avoid peril in the afterlife. Bhang is often enjoyed during ‘Holi’ (The Festival of Colours) and Maha Shivaratri (The Great Night of Shiva).

Taoism – Taoism is the belief that everything in the universe must remain in harmony balance. Most people can easily recognize the Yin and Yang symbol of Taoism. As far back as 4th century China, Taoist texts have noted the use of cannabis as a cleansing incense. It was said that cannabis helps to bring about a state known as “the naturalness”, by relieving the anointed of selfish desires and aiding in the appreciation of beauty and simplicity.

Modern Sects – Just within the last hundred years, several new age and modern faiths have sprung up claiming cannabis as a sacrament. Just a few of these include THC Ministry, Temple 420, Green Faith Ministries, Cantheism [2], The Cannabis Assembly, The Church of the Universe, The Free Marijuana Church of Honolulu (I’m not sure if they’re free or the marijuana is, but either way it sounds good)… And there are countless many more! 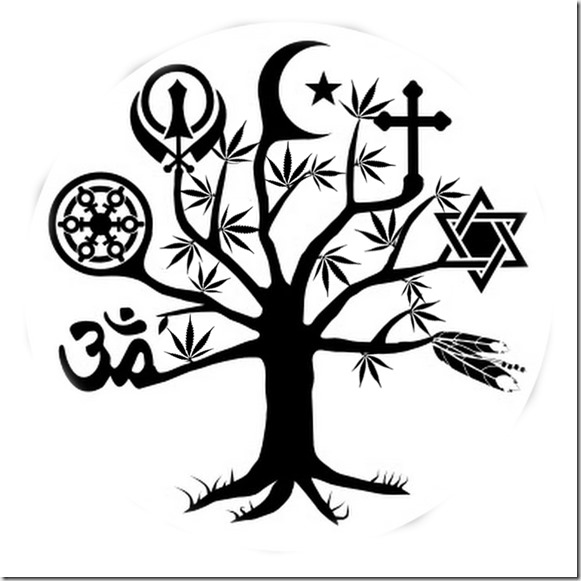 To some, religion can be a tender subject. And why wouldn’t it be? Faith is something held so very close to the heart of so many people. Imagine if the government were to make communion wine illegal, or start shoving people in jail cells for meditating. Section 56 [3] of the Controlled Drugs and Substances Act states that a person can receive and exemption from the law if “is necessary for a medical or scientific purpose or is otherwise in the public interest.” Most cases relating to marijuana under Section 56 have been dismissed by the courts.

I have always personally believed that for every ailment that we face as a species, a natural treatment is made available to us by the Earth. Cannabis can be medicine for the body, mind and soul and is used as such in many more religions, faiths, practices, sects and sub-sects than the five I have mentioned above. So next time you light up, take a moment to contemplate what you have in your hand. This plant is sacred to many people around the world. You may not even have gotten the chance to exist today if your ancient great-great-grand cave daddy hadn’t had cannabis for food, clothes or medicine. Give thanks, and breathe deep!

Caelan
Caelan is a queer and trans YouTuber, writer, and activist dedicated to informing and educating the public about the many uses of the Cannabis plant via their channel, "The Cannaisseur". Caelan has been a cannabis advocate for over 7 years, taking up the cause after being wrongfully dismissed by an employer over cannabis use. Caelan has continued to rally cannabis supporters in southern Alberta by organizing 420 events and fundraisers, providing cannabis consultation services to patients, working in the cannabis industry and actively educating the public on sensible drug policy. In their spare time Caelan enjoys baking, gardening, yoga, and live music.
https://www.youtube.com/channel/UCrMgHa5Vp3hDPIdqpus4YbA

The new reality of penicillin, Alexander Fleming’s discovery of 1928, hit world consciousness during World War II, when it was deemed a miracle.  Surgical techniques invented during the American Civil War, WW I, and WW II began in the 1950s routinely to be applied to cancers, reconstructions, and transplants.  They too were deemed miracles.  But […]