From the Ashes Rise a Phoenix

With the winds of change blowing at gale force in the world of medical cannabis it’s challenging to keep up with all the new players, regulations, and landmark legal battles surrounding the weed. Generally, the message is a positive one, with BC leading the country in establishing new rules and regulations to control the emerging medical cannabis industry, and in doing so, instantly legitimizing it and establishing it as a legal way to make a living despite the federal threats and rumblings of a dying Progressive Conservative party.

There are basically three models of dispensary that seems to have developed amongst the eager players in the new industry; The traditional, Physician prescribed and federally licenced type club that only accepts members that have the card from Health Canada. The ‘proof of condition club’ that requires documentation of an illness by various means from prescription bottles to copies of hospital records or other verifiable health assessments. Finally, the boutique retail pot shop peeking out from behind the shield afforded by the medical cannabis moniker.

In Nanaimo BC, there is a proof of condition club that has quickly established itself as the serious player in the mid island region reaching the 800 member mark in a matter of months of quiet operation in Nanaimo’s downtown core. 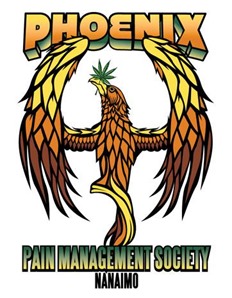 The Phoenix Pain Management Society is a not for profit grassroots organization made up of passionate activists and survivors of life threatening illness that have established a warm and friendly environment modelled very much after Victoria’s 18 year veteran compassion club, the VCBC.

Within months of opening it’s doors in Nanaimo the crew at Phoenix recognized that a large number of their new members were driving down island from communities without dispensaries like nearby Parksville and Qualicum Beach, and from as far away as Campbell River and Tofino. After some consideration the board of directors at Phoenix decided to open a second location in Parksville to service the needs of their members further north on Vancouver Island.

The society set up a small quiet operation in Parksville BC and slowly began to accumulate local members. That quiet operation was interupted by the  April 2, 2015 raid by RCMP on the Phoenix location which came as a surprise to activists and patients in the community alike. Despite a well established record of judicial support for not for profit compassion clubs in past cases, as well as the very real possibility of wins in the then unheard Smith and Allard challenges, Parksville authorities and RCMP chose to raid seizing much needed medicine and arresting Karl Mitchell, one of the dispensary’s volunteer staff members, who was later released on a promise to appear in Nanaimo Provincial Court.

Fortunately, the flames of the raid have given birth to a new stronger Phoenix. A Phoenix that can now stand amongst other compassion societies that have taken the unjust and unconstitutional laws on with costly challenges through the countries legal system to force the change called for by many Canadians. Support for the Phoenix crew has flooded in from many of the well established clubs that recognize the societies commitment to the cause. With the engagement of Kirk Tousaw, the SCC winning council that guided our fearless publisher and the Owen Smith group successfully through the legal labyrinth that has lead to freeing cannabis extract in Canada, to represent them; the Phoenix crew are feeling confident of a win that will further strengthen their hard earned reputations as serious committed activists with a well organized and professional operation.

In the long term the Phoenix Pain Management Society has plans for expansion into the northern communities on Vancouver Island, and hope to be able to offer medical cannabis products from Duncan to Campbell River with potential satellite outlets in Port Alberni and Tofino as early as later this year. With an intense community focus the not for profits director Akil Pessoa foresees a time in the near future when the society will reach out to empower youth, defend patients rights, and advocate for social justice on many fronts taking an active role in the communities they will offer services in, “We would like to actively participate in educating and informing the public about the benefits of medical cannabis as well as helping to shape a more compassionate society” said Pessoa.

The Nanaimo club location is simply set up and well stocked with an excellent supply of many strains of flowers, Beard Bros shatter, bubble and afghan hash, THC and CBD caps, Phoenix tears made from RSO oil, cannabis creams and balms, and a wide variety of medables that have been approved by the Vancouver Island Health Authority. It’s exciting times for Phoenix, with an ever increasing membership, a growing mail order business, and the imminent birth of the new Phoenix Cannabis Journal that will soon take it’s place on line with other leading cannabis publications. An exciting pro cannabis ezine featuring the voices of long time Vancouver Island activists like Nanaimo club manager Amand Orum, as well as Karl Mitchell the courageous activist who is still facing charges for the Parkville raid, and other pro cannabis voices, blogging and witting feature articles about the world of cannabis.

The June 24th hearing of the Mitchell case in BC provincial court has been postponed and reassigned from the original Nanaimo venue to the Vancouver courts with a new date as yet undetermined. News that was greeted with jubilation by the cannabis community as Vancouver crown council has a losing record in the prosecution of medical cannabis cases, and any jury comprised of Vancouverites will very likely be overwhelmingly pro medical cannabis leading to an acquittal. The win in the Smith extracts SCC challenge and the inevitable coming win in Allard in BCSC will have significant effect on the Mitchell case removing at least two of the pillars of the crowns case that will lead to the dropping of charges entirely, or to a costly and futile show from a crown council trapped between federal demands for action and the “on the ground” realities of the emerging industry.

Today, the residents of the mid island have been offered a view into the near future. Phoenix Pain Management Society can be proud of it’s mandate to help it’s members to take control of their own health care and to offer an alternative to big pharma. Much like its mentor the VCBC, integrity, honesty, passion, and love are reflected in the attitude and efforts of the staff, and the smiling faces of the members.