Deprecated: The $control_id argument is deprecated since version 3.5.0! in /home/oq5ayjaeetjt/public_html/wp-content/plugins/elementor/modules/dev-tools/deprecation.php on line 304
 Getting Involved with Hempology 101 - Cannabis Digest
Skip to content

I’m going to be writing about the why’s and how’s of starting a cannabis oriented university or college club. Apart from giving you the basic information on what you will need to do, I also hope to convince you of the great experiences that a school club can bring.

On Oct. 5, 2011, during my fourth year of undergraduate studies, I decided that Mount Allison University, the school I was attending at the time, needed an educational cannabis club. Up until that point I had never given much thought to school clubs, outside of thinking that “those kids need to grow up.” Groups like the Zombie Apocalypse club, Smash Bros club, and on and on have no objective other than to have fun. I felt that they all lacked some substance I craved—a substance, believe it or not, that was not cannabis. It was meaningful social input. I wanted a club that wasn’t ignorantly maintaining the status quo, but instead fighting against it. I wanted a club that could make a substantial difference not only on a personal basis, but also on a global basis. So, I started a club called High Society.

Over the next couple of months, I discovered three things. I found out that 1) High Society is also the name of a popular U.S. pornographic magazine; 2) after hearing the name “High Society,” absolutely no one took me seriously; and 3) my club was just as silly—maybe even sillier—than the rest. We weren’t fighting stereotypes, we were validating them. In the weeks proceeding the club’s birth, I was doing a lot of research on cannabis activism in a university setting and came across two names that changed my life: Ted Smith and Hempology 101.

I contacted Ted, and over the following months he gave me much of the advice that I’m now going to pass to you. At that point, the club was still operating as High Society, which Ted told me sounded “more like a Cheech and Chong party than a serious advocacy organization.” We also weren’t doing much in the avenue of education. We were offering movie showings every second week to a nearly none-existent audience and were deemed by the student body as a group of people “just hanging out getting high.” This stigma is something that all new cannabis education clubs will unfortunately have to deal with to some extent. However, the negative opinions can be minimized by hosting events such as lectures, or by aligning one’s club with an established group such as Hempology 101. Even then, anything to do with cannabis, even medical marijuana, will be met negatively by a sometimes surprisingly large portion of society. Anyone starting a club will have to accept this fact and make it their job to educate people and show them why their beliefs concerning cannabis and its consumers are false.

After three to four months of chatting with Ted over email, I decided that it would be in High Society’s best interest to take up the name, objective, and resources of Hempology 101. The decision was based largely on my personal values and the belief that people and the ideas they support are stronger when united. The Mount Allison Hempology 101 Society has now been running for several years, in which time many events have been hosted, including lectures, potlucks, and bonfires. We also hosted a cannabis convention with speeches by members of MCPAC (Medical Cannabis Patients Alliance of Canada) and THCC (The Halifax Compassion Club). In Feb. 2013, we took part in the MMPR protest, in which club members were able to meet their MP, Dominic Leblanc. In a couple of years, the club went from a “Cheech and Chong party” to having pictures taken with the Beausejour MP. Ultimately, the club is much more than just a group of people sitting around and smoking weed.

Starting a school club is a relatively simple process, which will vary slightly depending on how the university or college’s student union is set up. The first thing to do will be to visit your student union office and explain to them that you hope to form a new club. They will give you a form of varying length and content. The form will likely require information such as the club name, objective, executive members, meeting dates and locations, etc. Don’t fret much over these details, as meeting dates, locations, and even executive members are likely to change within the first couple of weeks or months of the club’s existence. At this point, the goal is simply to make the club official—nothing is written in stone. A completed and submitted form will allow the student union to decide whether to ratify the club. This process is carried out in a number of ways and largely depends on the school. In general, it will consist of something like a student committee voting on whether the club meets the proper criteria and should be allowed to function as an official school club. Hempology 101 is focused on cannabis education, as stated in the mandate, and as such will likely have full support from the voting body. You’d have to be a real square to vote against having a Hempology 101 club on campus. As of yet, no one trying to start up a Hempology 101 club has been denied by their student union.

Once the club is official, the rewarding work can begin. A Hempology club could be run by a single dedicated member, but there are many benefits to finding a solid group of people to help. Having an executive board allows for the delegation of tasks so that a single person is not responsible for everything the club does. For example: one person is delegated all social media tasks (Facebooking, emailing) while another is delegated all administrative tasks (room bookings, minute keeping) and so on and so forth. That said, it is important to find ambitious individuals, as poor-quality work reflects on the group and can reinforce the mentality that cannabis supporters are stupid and lazy.

Promote, promote, promote. The Hempology 101 motto is “Legalization Through Education,” and you can’t educate a non-existent audience. Building up an audience is crucial, and cannabis activists have a long history of being ignored. Cannabis itself is a great promoter, but if left to its own devices may attract an undesirable crowd. A group of people who only want to get high are impossible to educate and do little to further the movement. Ideally, all sorts of people from all sorts of social, economic, and ideological backgrounds will be part of the group. To support this diversity it’s important to make it clear that you do not have to smoke cannabis to care about cannabis, and that everyone is welcome to participate in club activities without the worry of cannabis consumption being pushed upon them. First and foremost, the aim is to provide the historical, scientific, and cultural information that has been systemically kept from the general public through legislative and cultural means. Participate in the school’s club days, write an article for the school paper (better yet, try and get an ongoing cannabis column), get a radio show on the school station, and seek out and use all of the other promotional sources that your school has to offer.

Once you have a club, an executive board, and members, you are ready to start projects and hosting events. The types of events and projects are up to you. If you’re looking for some inspiration, Hempology 101 has established some great events. Weekly lectures (notes for which can be found on the Hempology 101 website), potluck networking dinners, bonfires, and movie nights are all great ways to build club membership, and as excellent media from which to spread information concerning cannabis and culture. 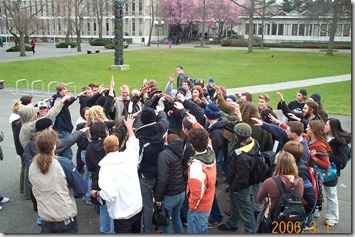 A couple of additional points that are worth noting: