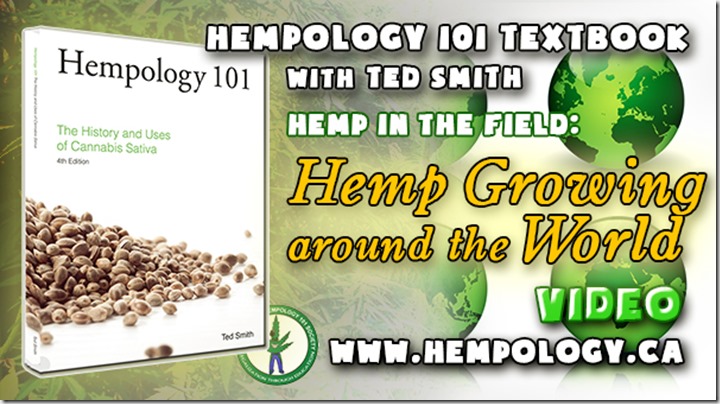 This is the last video explaining chapter 2, Hemp in the Field, of the cannabis activist textbook HEMPOLOGY 101: THE HISTORY AND USES OF CANNABIS SATIVA.  While hemp could grow in virtually every country in the world, unfortunately prohibition has stopped many farmers from planting the crop in many places.  Thankfully, though, the varied uses of hemp and the fact it can be easily grown separate from psychoactive strains have meant that many countries around the world have continued to grow it.  However, more and more Western countries are lifting the regulations suppressing hemp production, so quickly that no doubt I more have changed their laws since I did my research for the book.

At least 50% of the hemp grown is processed and used in China.  Since most accessible woodlands were cut down thousands of years ago, hemp has become an important building material.  Traditionally made into clothing and rope as well, hemp is also grown for seed production, with most of the seed going to food.

Many of those countries have only recently reintroduced hemp and there is little investment in full-scale fiber production facilities.  Most of the equipment to grow and process hemp comes from countries that were, or still are, communist.  However in Spain and France hemp paper production has continued for decades, mostly used for cigarettes.

For more information about hemp and cannabis, please buy my book.  Of course, you could simply subscribe to our youtube channel, but I only get a fraction of the information in the book into a video.

Next article What I Learned at ‘The Cannabis Seminar’

Ted Smith·May 21, 2020
There are no comments yet No comments

The Other Side of the Leaf

Why Hemp Oil Should Be in Every Cupboard