Solid political support behind optimistic Congressional bills in the U.S. House and Senate and the “Farm Bill,” along the successful initiatives in Washington, Colorado, Alaska, Oregon and Washington DC legalizing marijuana, spells game change. California has taken the lead in looking to register industrial hemp farmers. Kentucky is not far behind. All told, these initiatives gradually chip away at draconian federal laws epitomized by the Drug Enforcement Agency’s ongoing definition of marijuana-hemp as a Schedule 1 Controlled Substance.

H.R. 525, the Industrial Hemp Farming Act of 2013, amends the Controlled Substances Act to exclude industrial hemp from the definition of marijuana. Senate Bill 359 awaits action from the Senate Judiciary Committee, with 28 co-sponsors.

The Industrial Hemp Farming Act of 2013 is on Facebook. Social media plays a vital role in mobilization efforts. Farmers are rising up all over the country, most noticeably in Colorado, Washington, Oregon, California, Kentucky, Vermont, and Tennessee. Advocates see hemp not only viable as a food source but for everything from cosmetics to building materials. Industrial-hemp expansion in farming and then manufacturing is defined as having ‘boost-potential’ for the US economy.

Assuming its success, the carrot in the bills is that it offers the Beginning Farmer and Rancher Development Programme designed to help with financing and training for starting up. Since the 2008 Farm Bill expired, money has not been made available.

In June, the U.S. House passed an amendment protecting state rights to grow hemp for research. The House Rules Committee approved an amendment that would allow colleges and universities to cultivate industrial hemp for scholastic and agricultural-research advancement in states where hemp is already legal under state law.

On Capitol Hill, SB 954 it is known as “the agricultural reform, food and jobs act of 2013” or “The Farm Bill” for short. Marijuana Policy Project has put out the call to action asking supporters to stay in close touch with D.C. officials.

The view held in the state is that enforcement and oversight of hemp production is to be handled in cooperation with the California Department of Food and Agriculture (CDFA) and the country agricultural commissioners, as would be the case with any other crop.

SB 566 was authored by California Senator Mark Leno, and it is written to allow farmers to cultivate hemp and sell seed, fibers, and oil to businesses and manufacturers, pending federal government approval.

The new industrial hemp legalization in California occurred in response to U.S. Attorney General Eric Holder’s announcement that the federal government will not interfere in states that want to self-govern to regulate cannabis, clearly hinting that legalization is to be a state-by-state choice on the matter. However, Washington D.C. representatives are at the mercy of the U.S. Department of Justice’s clarifying whether Holder’s statement regarding cannabis carries over to the hemp industry in addition to medicinal and recreational marijuana. The conundrum exists specifically because federal law, imposed by the DEA, doesn’t distinguish between marijuana and hemp.

California argues to Capitol Hill that an independent hemp industry will open up new economic opportunities, providing solutions for debt woes in a state known for its agricultural prowess. Needless to say, their position is that delay is not a good thing.

Eric Steenstra, executive director of the Hemp Industries Association, told the Sacramento Bee: “SB 566 demonstrates California is pushing forward with an industrial hemp law that would not only stimulate much-needed growth in local business and farming sectors, but ultimately lead the nation toward a federal policy change that would open hemp cultivation to hemp farmers around the country.”
“California is poised to grow industrial hemp when the federal government gives states the green light,” said Senator Leno, D-San Francisco. 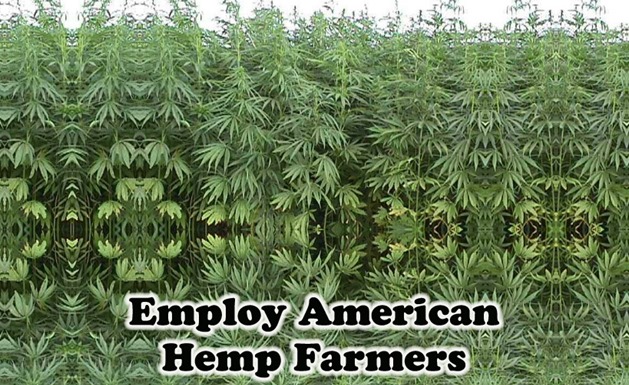 The mood is clearly positive. In Feb. of 2013, the Wall Street Journal published an article titled, “New Push to Mellow on Hemp” by Arian Campo-Flores, highlighting state and federal efforts backing farmers in calling for excluding the crop from drug laws.

In Oct. 2013, the mainstream media learned that a Colorado farmer is leading with the chin, harvesting the U.S.’s first openly commercial hemp crop in 56 years. 1957 is the official date of the last known commercial harvest. The Controlled Substances Act of 1970 prevents hemp-farming.

At the same time, we learn that Colorado spearheads the movement with the passage of Amendment 64, which is designed to assist in enabling farmers to prosper in industrial hemp cultivation.

Ryan Loflin, of Colorado Hemp from Baca County, is currently developing 55 acres. While not massive in production size, this is politically significant, according to Tom Murphy, national outreach coordinator for the advocacy group Vote Hemp. Agriculturally savvy, and wishing to make use of the best harvest timing, Loflin got a jump on it, planting his crop earlier this year, before the implementation of the state’s hemp-growing regulations, which are scheduled to take effect only next year.

He also cleverly recruited 45 volunteers to hand-harvest, not wishing to use a mechanical combine, as it’s thought to harm the plant’s stalk, which can be used in construction materials for inside-seat car parts and many other things. Loflin’s harvest is for hemp seed pressed for oil, to be purchased by Dr. Bronner’s Magic soaps, owned by a David Bonner, a longtime hemp enthusiast. In addition, Loflin’s strategy has the added advantage of securing a network of political supporters who continue to lobby Washington for the movement.

This fact gives an idea of the striking contrast between the draconian state of affairs today and the political climate back in the 1600s. In 1619 the Virginia Assembly passed legislation requiring every farmer to grow hemp!

Fast forward to the modern day: The DEA collapses hemp and marijuana together, legally speaking. This strategically disadvantages any industrial hemp farming aspirations. At the same time, the DEA is the assigned issuer of permits for anyone or any business to be legally authorized to farm hemp for industrial purposes. Permits to grant permission to grow hemp are an area of toying and bureaucratic game-playing, and they stand as an exhausting and futile expense of energy for farmers.

Yet long ago, hemp was ubiquitous to the economy, exchanged as legal tender in Pennsylvania, Virginia, and Maryland. Production grew until after the U.S. Civil War. It’s well documented that marijuana was sold in medicinal products in the late 1800s. By 1906, lawmakers were motivated to regulate with the Pure Food and Drug Act, which emerged to label products with cannabis.

After the Mexican Revolution of 1910, racists and those against the influx of Mexican immigrants in the US began to mask themselves behind an “anti-drug” campaign, which sought to target “menacing Mexican marijuana users” and this was effectively the beginning of the war on drugs that has flourished with a vengeance well into the 20th and 21st centuries.

The dichotomy created enabled the creation of powerful state-agencies and a convenient “us and them” mentality, dividing the people into “good” and “bad” and making work for law enforcement and a culture of the deploying agents. This was, and is, prohibition at its height.

After the Great Depression, 29 states had outlawed marijuana by 1931, with visceral emphasis on the targeting of Mexicans, who were treated as an “underclass,” and as “racially inferior” to whites.

In 1930, the U.S. saw the creation of the Federal Bureau of Narcotics (FBN). By 1932, the Uniform State Narcotic act looked to place states with the control over the “marijuana problem.” In 1937, the Marijuana Tax Act passed, and Congress criminalized and restricted possession to individuals who paid an excise tax for certain authorized and industrial uses.

Oddly, the Second World War turned things over. The slogan “Hemp for Victory” was heavily promoted by government because marine cordage, parachutes, and other military necessities needed to be produced. The US Dept. of Agriculture urged that hemp be planted, and granted draft deferments to eligible and qualified growers. By 1943, farmers that were registered were able to yield a harvest of 375 thousand acres of hemp.

When the war was over, the political climate reverted to an irrational punishing attitude. In the 1950’s, a first-offense marijuana conviction carried a minimum sentence of two-10 years with a fine of up to $20 thousand. The 60s saw counterculture and a loosening of views particularly among youth in middle and upper-class white society. In 1968, there was the creation of a new Bureau of Narcotics and Dangerous Drugs, with the Food and Drug Administration merging with the FBN.

1970 saw the National Organization for the Reform of Marijuana laws (NORML) founded, and the Shafer Commission. In time, 11 states decriminalized marijuana, and most reduced penalties. With that—blowback! The DEA was formed in 1973, as if the moment there is a loosening of attitude in the public domain, the state responded with further state sanctions, seeing to the joining of BNND and the Office of Drug abuse Law enforcement (ODALE).

In the cultural marketplace, again there was a push-back, and in 1974 the High Times publication was founded. By 1986, we saw the introduction of the Anti-Drug Abuse Act, and Nancy Reagan bumbling about as its chief mouthpiece. During this time, in law enforcement, 100 marijuana plants was seen as comparable to 100 grams of heroin. There was the development of the “three strikes, you’re out” policy, dictating life sentences for repeat drug offenders and even the argument for the death penalty for so-called drug lords (source: PBS News report).

The 1980s War on Drugs was craftily assisted by concerned parents whose teens were thought to be ruined by pot. Yet poorer, browner kids tended to be the ones with brushes with the police. George Bush’s War on Drugs, starting in 1989, is well-documented, as is the vast amount of money invested in “tall fences”—apartheid-like Mexico/U.S. border politics targeting drugs as the main source of law enforcement activity in their job.

In 1996, California Proposition 215 allowed the sale and medicinal use of marijuana for patients with aids, cancer, and other debilitating illnesses. This is of course stood in stark conflict with the federal laws, and a siege mentality has characterized the movement as a whole. Anyone associated with hemp tantamount to being seen as a common criminal ‘until papers scrutinized’ and even at that, cynicism and resentment permeates all aspects of the lobbying effort.

The Clinton Years carried on the same policies, and saw the fine-tuning of intel and weaponization of the state war.

Next article John Conroy: Master of the Courtroom

A May Vote-Remember Your ABCs

Papa Puff·December 29, 2019
There are no comments yet No comments