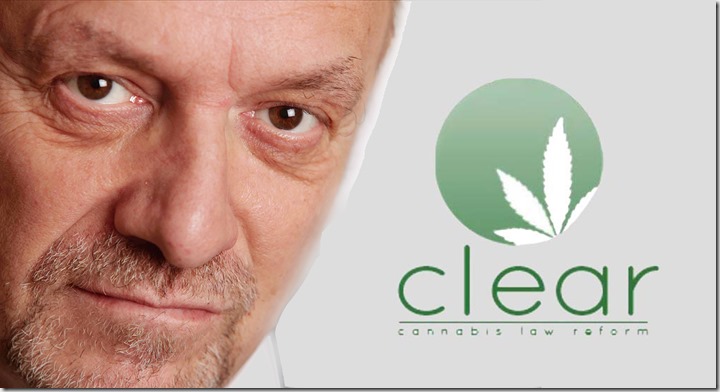 What was previously known as the Legalise Cannabis Alliance (LCA) was deeply in need of changes that could bring them on more solid ground as a cannabis lobby group. The alliance campaigned for the legalisation of cannabis for medicinal use, as biomass, hemp-based products and recreational drug use. Those purposes were worth registering as a political party and to participate in a few election. But it is honest to say that no big winds were made. In 2011 Peter Reynolds became the elected leader of the LCA. The ex-advertising man’s influence came immediately on the surface as the alliance did not only change his name in CLEAR but also altered its political strategy. The robust path of street protest and kick ass mentality was left and the party started fighting with more conventional, gentleman-like means, above all emphasizing on evidence-based arguments. It seems that the method catches on because just a few weeks ago CLEAR welcomed its 500,000th like on Facebook. In the age of social media this is worth something and the CLEAR-likers are still growing at a phenomenal rate on Facebook as they do on Twitter. This certainly reflects the trend in British society of people who are not longer prepared to take an obviously moralistic “No” to cannabis smoking for an answer. Only a few months ago a petition launched in the north of the country rebounded in no time into Buckingham Palace, on the road collecting more than 215.000 signatures from people tired to be treated as criminals and who sees their MP’s and government lead a far too costly and silly drug policy in general and cannabis policy in particular.

Lifting the ban on the cannabis prohibition, both for medicinal and recreational use, is certainly what the party is having in common with the petition supporters. But according to Reynolds patients who can find relief in the benefits of medicinal cannabis are of course receiving an higher priority. “Today’s ban on recreational cannabis use is absolutely unjust, but when you forbid people to use medicinal cannabis it is an outrage, it is disgusting.” With this statement mister Reynolds reminds us of people like Mario Oriani-Ambrosini, the white South African MP suffering from terminal lung cancer and who died of his illness in August 2014. Mister Oriani-Ambrosini said earlier in 2014 in the South African parliament that it was “a crime against humanity” to deny sick people access to medical cannabis. At that moment he urged the South African parliament to change the law considering the legalization of cannabis for medicinal, recreational and even industrial purposes.

Indeed the only people who can change the cannabis policies are the ministers and MPs of a country. And for Reynolds these people are just the ones who are terrified at what the media would say if there is a loosening of the policy on cannabis. Moreover, he continues, those people are corrupted by the alcohol industry who will do anything to keep the legal monopoly on recreational drugs. “We have to bear in mind that the alcohol industry is investing 800 millions of pounds annually in the British press through advertisement”. Doing so it is one big lobby group that causes an obstacle on the cannabis legalization path. Next to the politicians and the alcohol industry the tabloid press, which doesn’t leave an occasion untaken to demonize cannabis, are number three on Reynolds accused bench as the biggest forces who are preventing the legalization of cannabis in the UK. For him there is “no doubt that British press are a bunch of lying scoundrels and the absence of decent control on them makes that you need to be very wealthy to take them on in court, otherwise they just get away with almost anything they write”. Remarkably he ends his list of contra productive factors by mentioning the pro-cannabis campaigners themselves. It is obvious to him that in recent decades they behaved more in a way to become a burden than a blessing to lift the ban on cannabis.

But now CLEAR start changing its strategy and working methods. It started to build a new kind of armory for a new scientific kind of battle. Using evidence-based knowledge and arguments became the new way to confront unjust laws with. “Today we have the scientific evidence that proofs that the government has to change the cannabis policy”. On the one hand it might be true that there is now scientific proof to base a new more lenient cannabis policy on, but wasn’t there always? Will it on the other hand not almost be “mission impossible” to change the law at once? Could the court of justice bring a helping hand in such an impasse? CLEAR studied this possibility with lawyers specialized in this domain. “There is no base in the civil law for us to summon the government for prohibiting cannabis use. However, the criminal law could bring a legal outcome. But it would take a person, who is charged with possession and personal use of cannabis, to go through the entire process of justice and appeal till the European court of justice to make a chance.” This will off course not happen any day soon. So Reynolds’ lobby group plays the policy game through  the presentation of evidence-based arguments and showing the public opinion, the parliament and the British government the silliness and the enormous costs of cannabis prohibition. This rather scientific position makes Peter Reynolds confident enough to say that he thinks that during this Parliament there will be some form of medicinal cannabis use allowed in the UK. He goes even further stating that if the United States elect a Democratic president in 2017, the American pro-cannabis support will grow in the US and almost certainly cross the Atlantic Ocean.

Although CLEAR doesn’t support petitions most of the time, “because there are so many of them and most of them will only reach a few thousand people”, it became quite clear that the latest petition to legalize the production and sale of cannabis, launched in august by James Owen a 25-year-old economics student, would have a significant success. Especially as on the same moment four police and crime commissioners announced that they would not been so tough on small scale cannabis growers and consumers anymore. “It was serendipity that made the petition take off like that”. The reaction of the government on the topic was predictable for Reynolds. “It was the old lie that says how dangerous cannabis is and people should not use it. The government can’t simply start with a new discourse because it would show us how they have been lying to us for decades”. The more interesting event is yet to come on the 12th of October when the parliament will have a debate on cannabis. The debate will be lead by Paul Flynn a Labour MP who showed himself already in favour of medicinal cannabis use in the past. Although Reynolds is not expecting big changes in policy after the debate he thinks it might have a positive impact as he expects the MP’s who are in favor for a change in cannabis policy to come forward and speak out creating another milestone on the way for cannabis legalization. Which might be the way to finally stop the absurd criminalization of people who do nothing else then choose another form of recreational drug use without harming anyone else. But the fact is that until now people who are caught using or possessing cannabis risk a criminal record that might guide them away from an easy life to a bumpy road. Another not deniable fact is that cannabis prohibition gives the police and other justice forces a way to misuse their controlling powers as reports shows how poor and black people form the main target of police interventions while it is very clear that cannabis is used throughout all of  society. 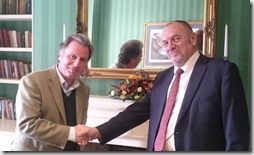 Another change might come from the cannabis business says Reynolds. “Most people in the UK and even our MP’s have no clue what is going on in Colorado, Washington, Oregon or Alaska. They do not know how big the cannabis industry is becoming over there and how fast it is growing. That you can now buy cannabis as easily as you would buy an apple in a fruit store simply goes beyond their imagination. Nor do they have any idea how cannabis is now treated as a real medicine in much of the US. And their again we see how badly and negatively cannabis is presented in our media. The cannabis legalization is now unstoppable in the US. Prognoses estimate that the legal cannabis market in the US will be worth 20 billion dollars by 2020. So it is just a matter of time before we see those changes coming over”. While Reynolds is quite confident in how the “business” could work as an eye-opener to the average persons cannabis knowledge, he is a lot less optimistic about the upcoming UN meeting UNGASS that is planned for march 2016 and where the UN will talk on nation level about the future path to walk on worldwide drug policy. Neither does he have faith in the lobby work of the Global Commission on Drug Policy (GCDP), consisting among others of ex-presidents of Brazil, Mexico and Colombia, Kofi Anan and Sir Richard Branson. “It’s good that those people are doing what they are doing but much of it is just public image building. I admire Richard Branson as an entrepreneur but if he would really like to change the drug policies he could start here in the UK. By giving us his loose change he would probably double CLEAR’s annual revenue and facilitate our work for a great deal”. 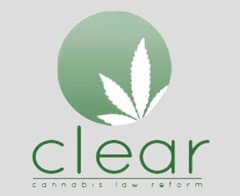 To summarize, change regarding the medicinal use of cannabis in the UK is coming from the bottom up. Ordinary people are making the change happening right now, as the new born cannabis-oil-market, or CBD-oil-market, is proving and it will go on growing bigger then it is at present. But the big change will come under influence of the US and the entire American continent, where so many things changed during the last years. “The main reason we are left with these silly cannabis laws is because our democracy is just not functioning any longer. In the US people can organize ballots on state level, which is the way that medicinal and recreational use of cannabis came on the political agenda in the first place. For now this is unthinkable in the UK, our parliamentary democracy is serving a small elite of bankers, newspaper owners and very rich people and this procedure leaves nothing for the common people”. Changing British cannabis laws may indeed require nothing less then the reborn of democracy in the UK.

WATCH THIS VIDEO INTERVIEW WITH PETER REYNOLDS FROM ClearUK

This year promises to be one of the most exciting of my career, as many personal projects will be coming to fruition on the ground while legalization looms in the air.  It is with a bittersweet sadness, though, that I have so much time to devote to the cause, as it is only possible because […]

What are hemp hearts? Composition, Nutrition, and Benefits