Deprecated: The $control_id argument is deprecated since version 3.5.0! in /home/oq5ayjaeetjt/public_html/wp-content/plugins/elementor/modules/dev-tools/deprecation.php on line 304
 The Wild West: Contrasting Clubs & LP’s - Cannabis Digest
Skip to content

The struggles of medical marijuana distribution in Canada

Describing Canadian medical cannabis distribution as the wild west show might seem like a stretch to some, but to those in the field there has never been as much interest, excitement, opportunity and disappointment as we are witnessing right now.  The Green Rush is real, very real.  With so many special interest groups working on the front lines and behind the scenes, it is almost impossible for even the veterans of this movement to keep on top of things.

Obviously, there is the black market.  Ironically for many this is the best source of medicine, as it can even be cheaper than at a compassion club, and often people have dealers that live close by or who may give them a decent price for decent product.  Some dealers even subsidize their sales to patients; they do not charge full price to some who need it most.

Second, there are dispensaries that provide cannabis products to people with documented medical problems.  Dispensaries are common in Toronto, Vancouver and Victoria, but outside of these major urban centers there are not very many.  There are even fewer storefront clubs now, as four have been raided this summer: Farm Assist in Halifax as well as two WEEDS locations and Budzilla in Vancouver.  The justification for these clubs has been strengthened, though, by the recent Owen Smith court decision in the BC Court of Appeal.  This decision confirms the rights of patients to access cannabis extracts, products available mainly at the clubs. 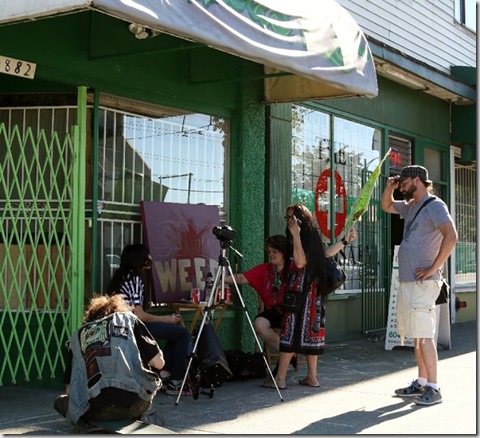 Each raid appears to have occurred for a different reason, though many believe the Vancouver Police Department is checking out each dispensary it can find to see how strict its rules are.

For many the most disturbing is the raid on Budzilla, as it does not seem to be based upon a complaint so much as on the VPD targeting it because of its name and the products it produces.  “The appearance and packaging of many of these items could be potentially very appealing to children,” read a VPD statement.  Police also cited the fact Budzilla had products in other dispensaries.  Clearly the police have been looking around and taking lots of notes.

In Nova Scotia, police issued warrants on three locations in August, laying multiple charges against Chris Enns, Sherri Reeve and one other man.  While it is speculation, this raid seems to have been instigated by the police in a militant approach to medical cannabis. 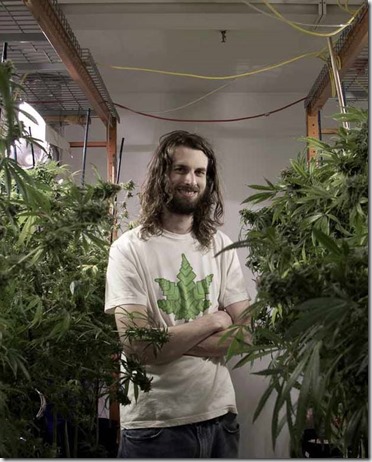 (Chris Enns of the Farm Assists)

According to Chris, “They cut down every plant in my garden and stole every gram that was in storage, all completely with the limits of our MMAR license extended by the Allard injunction.  They took every ballast, bulb, reflector and 90% of the fans. They stole at least $50,000 in hydroponic equipment inventory, as we also use a garage at my production site for the storage for The Grow Op Shop.  They left a large 5 gallon still and all the jars being used to make extracts as well as many obvious garbage bags of shake that were beside the still at the production site.  One hundred fifty grams of dab that were in storage at the residence were left untouched, but all cannabis and cash from the house (also a legal production/storage site) were also stolen.  Interesting, a handful of mother plants and clones at the house were also not taken.”

It seems the police and crown in Nova Scotia have realized that convicting anyone for a cannabis extract charge right now is virtually impossible, yet in Vancouver that seems to have been the main reason for raiding some clubs!  In another case out East, Terry Wood had his cannabis resin charges stayed in court, with the crown citing Owen’s case as the reason for dropping the matter.  It seems to be the case across the country that some charges are being withdrawn while others are still proceeding. 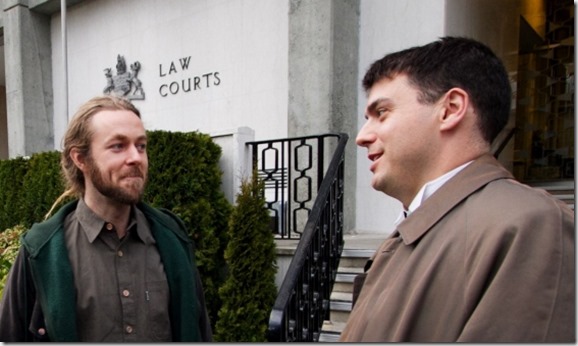 With Kirk Tousaw and Owen Smith now waiting for a date with the Supreme Court of Canada, the stage is set for an epic battle in Ottawa.  In one corner, Owen, backed up by the Victoria Cannabis Buyers Club, Dr David Pate and Kirk Tousaw, is ready to prove that cannabis resin and extracts should be legally available to patients.  In the other corner, the crown, as directed by Health Canada, will not back down from its position that there is a lack of scientific evidence to show that these drugs are safe.  They claim there is no scientific basis for allowing patients and Licensed Producers to make cannabis extracts legally.

Mr. Tousaw was very happy with the majority decision from the BC Court of Appeal.  “The court found that section 7 protected the rights of patients to make the reasonable choice to use medical marijuana in forms other than dried marijuana. The court determined that these types of medical decisions go to the core of what it means to be an autonomous person living with dignity in our society.”

It is strange to think that all of the hard work of Kirk will likely end up making it legal for LPs, not dispensaries like the VCBC, to sell cannabis extracts.  However, that is exactly what is going to happen, as the courts are not endorsing clubs in this decision but are recognizing a patient’s right to make medicine from this plant.  Once that is allowed, the crown must find a legal means to supply those products and the only legal game in town is the new Marijuana for Medical Purposes Regulations.

Currently, a third option for obtaining cannabis products is home growing.  The injunction, we should remember, is still protecting patient gardens across the country.  Health Canada had planned upon ending the MMAR on April 1, 2014, and replacing it with the MMPR, much to the bitter dismay of many patients.  But in the spring a Federal Court of Canada judge ruled that patients and their designated growers, as licenced under the Marijuana Medical Access Regulations, would be allowed to continue growing medicine until a full hearing was held.

The crown has appealed the injunction, hoping to reverse the Federal Court decision before the full hearing in held in February 2015.  Veteran lawyer John Conroy is ready for a couple of weeks of court, with testimony expected from patients and Dr David Pate, the star witness in the Smith trial.  Conroy is adding many of the arguments used in Smith, which was based almost entirely upon the evidence of Dr Pate, in large part because Owen was busted when the MMAR was in effect, and it is unclear whether or not that decision could force the government to change its new regulations.

Many patients across Canada are currently able to meet their medical needs by using the protections earned in the Smith trial and the injunction.  Several benefits have been organized by the MMAR Coalition Against Repeal, the group behind the injunction, with more expected for both legal challenges, as these court proceedings are expensive.  Fear of what will happen if either of these cases fails will hopefully help to inspire donations, and ensure the money is there to pay for everything required.

Since April 1 almost 10,000 patients have signed up to various LPs 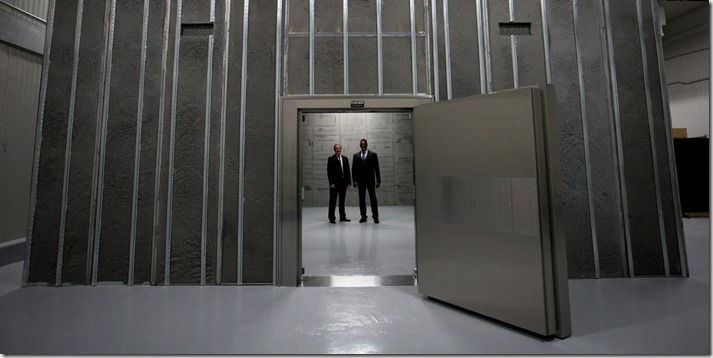 (inside the Vault at LP Medijean’s facility; Huffington Post)

The fourth and final option for obtaining cannabis is the group of producers licensed under the MMPR.  Since April 1 almost 10,000 patients have signed up to various LPs, although this is number far smaller than these eager companies had hoped for.  The government would have preferred all patients to  gain access to cannabis through the MMPR, but things have not gone smoothly.  Certainly the continued existence of clubs, along with the injunction, has meant that the patients who already use cannabis in any large amount have a supply chain in place.

Problems with the new LP system include recalled crops, lack of supply, resistance from the medical community, changing protocols from Health Canada and a rather sudden halt on the granting of new applications.  Many potential LPs are losing a great deal of money waiting for final approval, but Health Canada seems to have shut the door on them, with no new licences granted since May.  Investors are getting worried, as there is concern the government has decided to change course from the projected 50-70 LPs it originally claimed would get approved to fulfill the predicted $1.4 billion dollar industry by 2020. 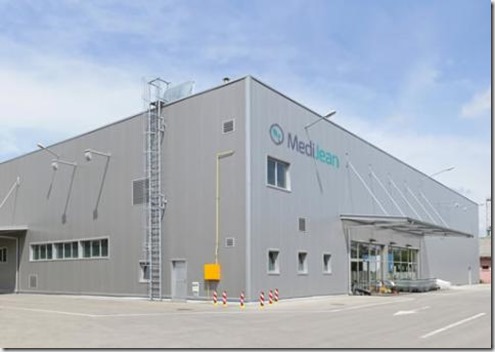 (outside look at LP MediJean’s facility)

One of the potential LPs that appears to be imploding is Medijean, based out of Richmond BC.  Tweets in early Sept claimed the partners involved were ignorant and the head grower a liar.  Other tweets stated lawsuits were being filed against the RCMP and Health Canada.  The most colorful one told readers the best way to kill a LP application was to make anonymous phone calls to the RCMP claiming the people behind it are linked to organized crime. While the president, Jean Chaisson, has claimed that someone from within his company must have used his Twitter account without his permission, he has confirmed the basic content to be true, including that his is quitting after spending $10 million on the company.

In my almost 20 years of activism, I have never seen anything like this.  With so many factors at play, no one knows how things we will work out in the end, but one thing is for certain.  The cannabis floodgates have been opened.  From corporate boardrooms to basement gardens, people have never been so aware of the potential of cannabis to help people with a multitude of ailments.  It will be many years before it has all settled into a uniform system but for now the excitement of working within the medical cannabis industry here in Canada will likely continue to grow for some time.

by Ted Smith Well it appears as though I will be writing the “Updates, Etc.” article in each issue now, taking over from my love, Gayle Quin, who is struggling with her health.  She will continue writing a personal note with each issue. (Ted and Gayle coloured Issue 42 of the Cannabis Digest) This newspaper […]

By Owen Smith Based in a mythical pre-historic Costa Rica, two young men discover the miraculous healing properties of a special herb and begin a quest to bring it’s material and health benefits to the people of their kingdom. Loosely based on the constitutional challenge to legalize extracts for medical patients in Canada, Owen has written […]