As the United Nations gathers a Special Assembly on global drug policy in New York City, cannabis enthusiasts around the world will celebrate the changing landscape the entire day of April 20.  With victories big and small to celebrate in almost every country on the globe, there has never been so much hope for the future of cannabis.  Indeed, as time goes by there will be an increasing push to recognize April 20 as a holiday for those who love the herb.

While the history of meeting at 4:20 pm to smoke cannabis goes back into the early 1970’s, it was not until the mid-1990’s that people in cities like Vancouver began gathering in large numbers on April 20 to protest the laws and celebrate the culture.  Since the first April 20 event at Victory Square in Vancouver, of which I had the pleasure of being the master of ceremonies, these annual protests have become very popular in many cities, drawing large crowds, media and the occasional police officer.  For the most part these smoke-ins have been peaceful, fun gatherings, with the most common complaint being the garbage some people do not clean up.

In Victoria there has been a gathering at City Hall since 1998.  Starting with a group of about 50 that got in a big circle to pass joints around, the protest has grown to around 2,000 for the last few years.  It is a very simple set-up, with very few booths, no bands and only a short speech around 420.  The highlight is always the costume contest, where people get to show off the awesome cannabis clothes, make-up and accessories for bongs and other prizes.  This year should be no different, as everyone has enjoyed the simple, non-commercial set-up that is primarily focused on smoking herb and relaxing with friends. 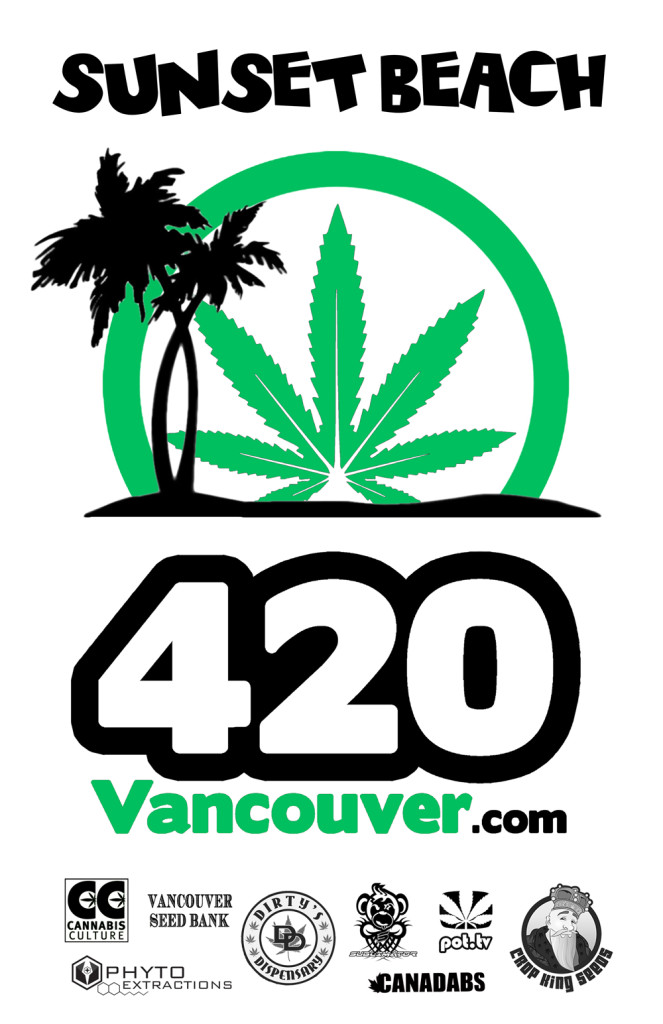 Over in Vancouver this year will be very different, as the city has granted permission for celebrations to be held at Sunset Beach instead of the regular location at the Vancouver Art Gallery.  This move sparked fury in some activists, who have swore that an open cannabis market will be held at the old location just like every other year.  Tensions have been rising in the cannabis community in Vancouver since last April 20 when almost 70 people, mostly under 20 years old, went to the hospital after eating cannabis infused edible products at the Vancouver Art Gallery.  This caused the Coastal Health Authority to push the city to create dispensary regulations that ban edible products and to pressure police and city into doing something about the open cannabis markets that appear at the major rallies at the Vancouver Art Gallery, as they sell unlabelled, untested cannabis products to people of all ages.  A small yet determined group has been occupying the Vancouver Art Gallery since Sunday in the hope of maintaining a camp until the larger event on Weds, trying to stop city workers from erecting fences as was threatened.  Though the crowd on Sunset Beach is expected to be much larger, no doubt having two events at the same time is causing even more chaos.

Most cities will be lucky to have one event, as the grasp of prohibition is still stopping many people from coming out in public to admit they smoke the herb.  However, there are so many people feeling more empowered with this plant every day, and the police are learning that it is counter-productive to bother peaceful, harmless people smoking a plant.  As more and more come out every year to show their support at these rallies, we are certainly approaching a tipping point in the history of this drug war and the potheads are winning.  April 20 is Victory Day for cannabis lovers and deserves to be treated like a holiday just like any other important cultural occasion.

Mandatory Minimum Sentences; Hemp Oil; A Note of Caution and more from the Cannabis Digest this week November 1st – 7th, 2014 with Owen Smith Subscribe to the Youtube Channel!   Nov 1st by Admin You can now read the entire Issue 42 of the Cannabis Digest Online for Free . http://cannabisdigest.ca/cdfall2014full/ Cannabis Digest Fall […]

By Ted Smith Here is the last video blog with a story of the good old days of Hempology 101 that we created to celebrate the 20th anniversary of the group’s existence in Victoria.  With so many great stories to tell it has been hard to pick the highlights, as I have attended or organized […]