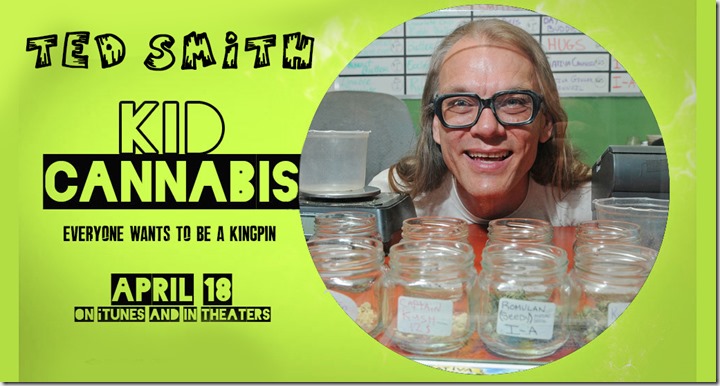 for the Cannabis Digest

Rarely does an opportunity to act in a feature film fall into your lap.  It is almost impossible then to be asked to virtually play yourself in the movie, even getting to introduce yourself, using your real name in your own place of business.  An illegal business, to boot.  This incredible scenario actually happened to me, but I am getting no credit for it!

When one of the producers first contacted me, it was not to ask me to play the part of the guy in the pot store.  He said the director thought it would be ironic to get a local activist to play the role of the sketchy guy that rips off the main characters!  Apparently they went around Victoria looking for someone to play the weirdo and several people suggested they come see me.

As director, John Stockwell, first entered the store he immediately realized it was perfect for the scene.  We seemed to hit it off.  He claimed that they wanted someone from the real cannabis industry in the movie because it would help to promote their work.  In order to make sure the script was true to life, he sent me a copy to read and even improve upon if I saw fit.  Everything appeared so good that I agreed to let them shoot the film in the club for free, and did not ask for money myself.  It seemed like I was going to get a huge chance to forward my career.

After doing an audition for the sketch case, I was told that John wanted to change my role to the guy behind the counter, expanding on the original script so I could talk about selling cannabis more.  That suited me just fine, especially when it was clear the director was encouraging me to get into the role. It felt almost like introducing a new member to the Victoria Cannabis Buyers Club, the medical dispensary I had founded, except that there was no discussion of symptoms and pain management.  My role was the dealer in the Holy Smoke in Nelson BC, a store that for a few years was able to sell cannabis over the counter to anyone who walked in the door that looked old enough.  It was eventually shut down after gaining too much exposure in the media.  The role was a natural for me. 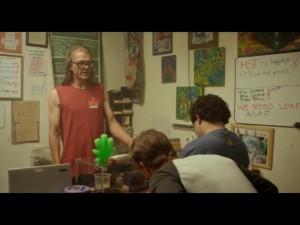 Doing the scene in the club seemed a perfect fit, too.  With few corporate logos anywhere and lots of original art, the crew that looked after designing the sets was actually disappointed they did not get a chance to decorate more.  Apparently when they had first seen the script it had appeared to them that the scene in the pot store would be a lot of fun.  The only thing they had to work around was the fact we refused to interfere with the flow of the medicine, and made the crew show up at 8 am to start filming so the club could open at 10 am.

There were large trucks all down the block with cables running out of them into the club.  A catering tent was set up in front of a nearby seniors’ home.  My partner, Gayle Quin, was filmed on the front desk saying “hello” when the main characters first walked in, but that was not included in the movie.  You can see one of the staff, Minneh Kamua Bushby, as she walks past the main actors while they approach me, but everyone else in the film is an extra. The smoke viewers can see comes from a smoke machine, except for what is coming from the back room, where a few of us puffed down between shooting takes. 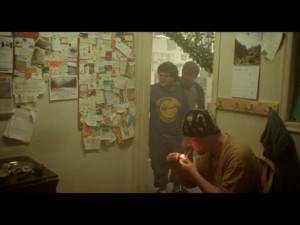 Though the director was doing his best to try to stop anyone from smoking real pot during the filming, the extras were keen to smoke some good stuff while they stood around the box waiting for things to roll along.  Between the smoke machine and the fact the store always smells like cannabis, he never seemed to catch on to how much puffing was actually going on.  One of the film crew even kept coming to the back to sneak in tokes from us, as we thought it was our duty to smoke pretty much the whole time they were there.

Filming the scene was amazing.  Since there was no script for my part of the scene, the director was happy to allow me to make up my lines on the spot.  He even encouraged me to talk about my book, holding it in front of the camera while I talked about some of the history of cannabis.

In an attempt to capture the expressions on the faces of the two young main characters the first time they walked into a pot store, the director had the actors wait outside until the scene was ready to shoot.  We filmed the whole scene the first time with very few breaks.  In the movie you can see the looks of surprise and wonder when I suddenly pull out a half pound of pot and shove it under their noses so they can smell it.  These high-flying actors from the states had likely never seen near that much cannabis in someone’s hands before, and the movie captures their shock and joy at seeing such a big bag of beautiful buds.

It was over in a flash.  A few members had to wait while the club got set up after the movie crew left, as taking down all of the cameras and getting everything out took longer than we expected.  But soon all signs of the filmmakers was gone and it all seemed like a dream.

And dream I did.  Thinking that I was getting a chance to promote my book like that in a feature film made my head swell.  All of those years of hard work seemed about to get rewarded with this one quick bolt of lightening, propelling me into fame and glory.  Since the director was insisting that I talk about my book in the scene, and talked repeatedly about how important that kind of information was to the movie, it looked like a sure thing.

Waiting for the movie to come out was easy because my life is so very busy.  At the same time, though, it was driving me crazy that the biggest break in my career was so close to hitting the big screen. 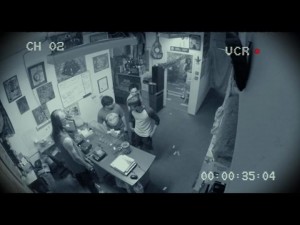 When the movie was finally released in April this spring, it was one of the most bittersweet events of my life.  Instead of being released at theatres across the country, the film was only shown in Montreal and Toronto, plus select places across the USA.  Though I wanted nothing more than to watch the film for the first time in a big theatre with a bunch of my friends, we were forced to resort to watching it on-line at home.

Watching Nate and Toffer, the main characters played by Jonathan Daniel Brown and Kenny Wormald, walking into the club in a movie is surreal.  When they come inside and walk up to the counter they look like kids in a candy store.  While the whole scene is just over 2 minutes, the film gives a really good impression of what a local pot store would be like, except for the sketchy guy they leave with.

Unfortunately the part of the scene where I promoted my book was not kept in the final cut.  There is a brief close-up of the front cover. 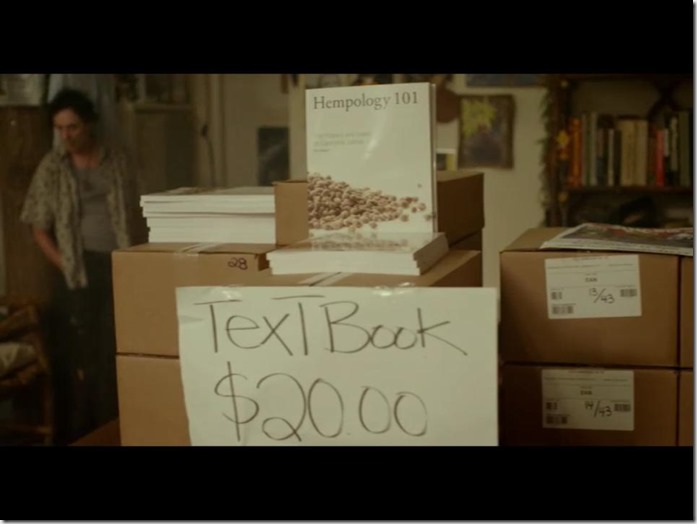 It gets worse.  Even though I introduce myself as Ted in the scene, I am not included in the list of actors and characters.  They give credit to a number of other actors who played more minor roles, including a stripper, but no mention of me or the club appears in the credits.  Even after letting them use the space for free, the VCBC gets ignored in news stories about the film which cite all of the other well-known locations in Victoria that appear in the movie.

This film focuses on a kid who got busted after a year of smuggling millions of dollars of pot across the Canada/USA border.  The real irony for me is that, in the meantime, one of the actors in the film has successfully sold almost as much pot illegally in one of the actual sets featured in the film, but gets absolutely no mention at all.  None.

As far as the film itself goes, Kid Cannabis is an entertaining story that accurately represents the industry and highlights the fact the USA punishes pot smugglers more than it does killers.  Anyone watching the film with an open mind would see the futility in the war on cannabis.  With lots of pretty girls, beautiful scenery and constant action, Kid Cannabis will be sure to entertain audiences for years to come.

Read more from Ted Smith at the Cannabis Digest BLOGS