Deprecated: The $control_id argument is deprecated since version 3.5.0! in /home/oq5ayjaeetjt/public_html/wp-content/plugins/elementor/modules/dev-tools/deprecation.php on line 304
 Trudeau Jumps on Cannaboat - Cannabis Digest
Skip to content

With the emergence of new political figures nationally and provincially, activists championing a cause chomp at the proverbial bit to ferret out the philosophy and position that he or she may bring to the table in relation to their “issue.” Having been entrenched in cannabis activism and having been a patient advocate for over a decade, I have a tendency to analyze individual politicians’ divulgement about their perceptions of cannabis and drug policy reform.

Trudeaumania flourished in the late ‘60s when Pierre Elliot Trudeau, charismatic and appealing to younger voters, climbed aboard the leadership race of the Liberal Party of Canada. Trudeaumania was still a phenomenon during the subsequent federal election and during his early years as Canada’s PM. 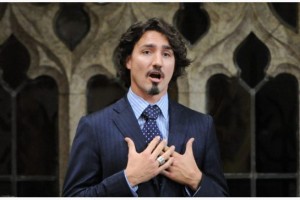 Under the Trudeau government, the Le Dain Commission, conducted an Inquiry into the Non-Medical Use of Drugs, from 1969 to 1972.

Gerald Le Dain and his colleagues endorsed the repeal of the prohibition against the simple possession of cannabis and for cultivation for personal use.

Fast forward to 2013, and it’s Trudeaumania revisited. Justin Trudeau, the newly minted leader of the LPC, has more in his corner than genetics and political heritage. He also attracts younger voters (a crucial missing demographic from modern-day elections) and he understands the political spotlight.

Trudeau’s sentiments on cannabis were not voiced until he was in Kamloops, B.C., at an outdoor assemblage this past summer, when he focused on a sign purporting the decriminalization of cannabis. He chose to seize the moment to clarify his stance on the need to modernize Canadian cannabis laws. He later attributed his arrival at this perspective to the NORML Women’s Alliance of Canada, when interviewed by the Huffington Post.

Trudeau’s words to the people in Kamloops were, “In many cases, it’s more difficult for young people to get their hands on cigarettes than it is to get their hands on weed. Once we regulate it, and require ID to be shown before anyone can buy it for proof of age, we actually are putting a better control on it. Nobody can argue the current approach on drugs is working. We have to look at something else. I think following [some of the American states’] lead in terms of looking at legalization is a big solution.”

A further catalyst for Trudeau’s views on cannabis law reform stemmed from his brother, Michel, who died at the age of 23 in an avalanche in B.C. Michel had marijuana possession charges pending at the time of his death.

Trudeau has elevated the ire of the Conservative Party of Canada and the Harper government with his liberated views and enthusiasm for propagating them profusely. He has had several key players in the Conservative caucus attempt to discredit his stance by distorting his words and intentions.

The CPC launched an emotional, over-the-top ad campaign in Oct. focusing on Trudeau’s agenda to legalize and regulate cannabis.

“Justin Trudeau has a famous last name, but he lacks the judgment to be Prime Minister,” the Conservatives said in Oct. “His only policy priority so far is to promote the legalization of marijuana. He wants to make it available for sale, like alcohol and tobacco. But that would dramatically increase its availability to minors and send the message that recreational drug use is acceptable.”

Maclean’s columnist Paul Wells reported that the advertisement ran in Punjabi and English, targeting immigrant communities. There are reports of the ad being heard from coast to coast.
In the wake of this Conservative party radio ad, Canadian Minister of Health Rona Ambrose announced a new strategy to educate youth about drug use and addiction issues. Taking aim at cannabis in the process, her five-year plan, with an attached price tag of $15 million, is being promoted and flaunted while crucial governmental services are being cut. These include front-line workers in Health Canada who processed exemption paperwork for patients.

Patients have been fearful of legalization, surmising that it inherently equates with the relinquishing of personal cultivation to reconcile their medical requirements. Trudeau is cognisant of the current plight of patients and of the looming reality of the elimination of personal cannabis gardens. When questioned by patient Stephen Stairs at a gathering in Saskatchewan, Trudeau, after admonishing the “Harper Nanny State,” told Stairs that patients should have access to their gardens and continue to be able to produce their own medicine.

After promoting a loosening of the reigns of prohibition, Trudeau went on to profess to socially consuming cannabis with friends since he became a sitting MP. This caused a second swell of negative commentary and hysteria by the CPC in mainstream media.

A plethora of national and provincial politicians lent support and spilled the beans on their prior personal cannabis consumption and shared their views on cannabis law reform almost en masse.

This discussion would be remiss without mentioning the stance of the LPC as reflected on their official website:
The Liberal Party of Canada believes in a smart on crime approach, targeting real criminals instead of our youth, to keep our communities safe. Liberals understand the need to consider ending the prohibition of marijuana and addressing the root causes of crime to see real results.

The LPC appear to be adapting to the times by realizing that a meaningful conversation about cannabis is imminent.
With a federal election not on the political landscape until 2015, it may seem pointless to ponder about who you will cast your vote in favour of, but there has lc been a better time to start beating the drum about voting and keeping an eye on those politicians committed to sensible drug policy.

Updates, Warnings, and Suggestions By Gayle Quin It was a bright and sunny day when I left off last time. It was smooth sailing to Vancouver, and fairly smooth sailing throughout the weekend. My most humble thanks to Sandra and Remo for putting together the 1st Vancouver Health Expo. It was a weekend combined with […]