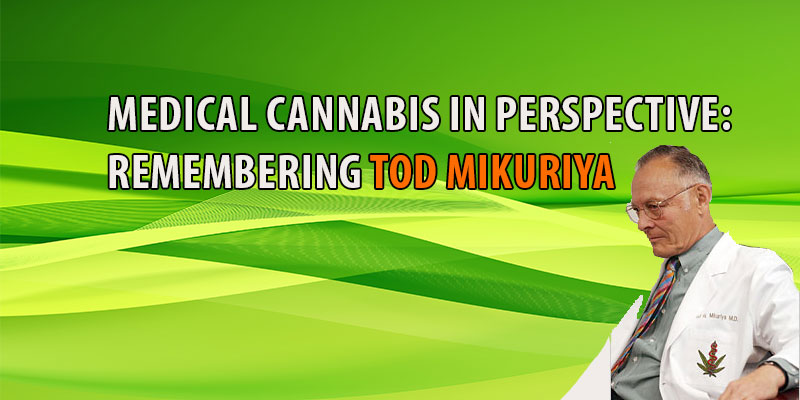 Recent moves on the part of two city governments in BC, in defiance of federal law, to regulate medical cannabis dispensaries, and similar moves in twenty-three US states over the past two years represent giant steps forward on the road to legalizing medical cannabis. Key builders of that road have been patients and their companions who have experienced a call to action, and doctors who have felt compelled to help. All of the above, plus the fact that today—June 1 2015—marks the first anniversary of Cannabis Digest Blogs, has put me in mind of a key historical figure. As the title suggests, today’s blog centres on Tod Mikuriya, sometimes called the father of the medical cannabis movement.

Mikuriya (1933-2007) was an American psychiatrist with a unique story. In 1959—his second year of medical school at Temple University—he read an unassigned chapter in a book on pharmacology. It chronicled early American uses of cannabis oils and tinctures. By the end of the summer Mikuriya had read everything on cannabis available in the school’s medical library, and had travelled briefly to Mexico to sample the plant. Upon graduating he was fortunate to find work with Humphrey Osmond. Osmond oversaw research at the New Jersey Psychiatric Institution at Princeton; Mikuriya was hired to serve as director of its Drug Abuse Treatment Centre. Osmond, who is credited with coining the term ‘psychedelic,’ introduced Mikuriya to Timothy Leary, America’s leading light on all things LSD, and members of the San Francisco Diggers, informal anarchists with a passion for guerilla theatre. During his months off he travelled to Morocco and Nepal where he befriended locals and observed the cultivation and use of cannabis.

Then in 1967 Mikuriya was recruited as director of non-classified marijuana research for the National Institute for Mental Health. The ‘non-classified’ designation is important, as from 1945-1975 there was much classified research on “marihuana” carried out both by the CIA in its MK-Ultra program, and by the US Army at Edgemont Arsenal, Maryland. It did not take Mikuriya long to discover NIMH’s anti-cannabis bias. When the Institute sent him out to spy on San Francisco communes he arrived, checked out the culture, found it congenial, and stayed on.

In 1972 Mikuriya produced the first of a series of shocks to World Cannabis Awareness, if there is such a thing. He published a work entitled Marijuana: Medical Papers, 1839-1972, which unearthed the western history of medical cannabis. The Medical Papers introduced North Americans of the day to the 19th Century published works of Dr. William O’Shaughnessy, as well as to the works of other doctors influenced by him. O’Shaughnessy had served as surgeon and physician for the British East India Company in Calcutta from 1833-1842. He was a quick study in languages and whilst there had traveled widely, immersing himself in studies with local Ayurvedic doctors, who routinely employed what he called Indian Hemp. He learned to develop his own tinctures, and conducted experiments both on animals and humans. Upon his return to England, he brought plant specimens for the Royal Horticultural Society, and quantities of prepared Indian Hemp medicine—a.k.a. cannabis—to share with European and North American doctors. Thanks to O’Shaughnessy’s many lectures and publications, news of medical cannabis spread throughout Canada and the US. Thanks to his careful documentation, local doctors and chemists were able produce their own potent tinctures, and to use them as they and their patients saw fit.

Pharmaceutical companies followed suit, pouring medicines into those now collectible bottles whose images we love to post. Cannabis tincture or oil became standard over the counter remedies until the early 1940s, when they were forcibly removed from the formularies—though not before over a 100 clinical studies on these remedies had been published in the medical journals of the day. These were the studies that Mikuriya had discovered, and had made available to a 1970s public that had lost all memory of them. If you haven’t had this treat, do find time to read through bits of the Medical Papers, Volume I. They are written in an accessible narrative style, and are uplifting. If you find yourself going mad for them, there are two other volumes: Volume II: Clinical Studies and Volume III: Collected Works of Tod Mikuriya, MD. I harbour an attachment to paper, but you can find much of this material online.

For world progress in medical cannabis, post-1960s San Francisco and Tod Mikuriya proved to be a cosmically efficacious combination. In the 1980s San Francisco was a centre simultaneously for patients with AIDS, and for a vibrant gay rights movement. AIDS was a viral illness then new to the world, and members of the gay community had been especially hard hit. It was they, along with cancer patients in the area undergoing chemotherapy treatments, who first noted that cannabis was the best remedy for enhancing appetite and staving off nausea. In 1991 Mikuriya, in concert with Dennis Peron, “Brownie Mary” Rathbun and others, worked with the newly formed San Francisco Buyer’s Club, and developed and helped to pass Proposition P, a medical marijuana initiative for San Francisco. In 1996 they worked similarly on Proposition 215, the Compassionate Use Act for California.

Soon after these events local compassion clubs were overwhelmed with calls asking where to find a sympathetic physician. In principle, California physicians were permitted to recommend cannabis, or provide patients with a written diagnosis, but few were brave enough. Radical local politics can cause these kinds of disharmonies, so in practice, the clubs sent nearly everyone to Mikuriya. During the next few years he wrote over 9,000 recommendations. These acts did not go unnoticed. In 2003 local narcotics officers, through a set of trumped up charges, tried to have his medical license removed. No patient would testify against him, so they recruited an HMO psychiatrist to review his medical records. Predictably she accused him of negligence, though she had never met with a single patient. It came to light after the trial that the judge, who found against Mikuriya, had been a member of an overtly anti-cannabis Christian group. But the negligence charge stood. It is a testament to the level headedness of the California Medical Board that its members were not willing to suspend Mikuriya’s license. Perhaps some of docs had read the published Medical Papers. Or maybe they just felt guilty for not helping patients out. Mikuriya was placed on probation, and had to pay out over $75,000 to cover his legal costs—punishment enough for trying to promote progress.

In 2000, Mikuriya founded the Society of Cannabis Clinicians, and in 2003, associate Fred Gardner established O’Shaughnessy’s, a journal for ongoing cannabis research where doctors who monitor cannabis use can share their findings. Named after William O’Shaughnessy, it has come to be a great place to search for news about ongoing medical work on cannabis. In 2004, Mikuriya published Dr. Tod’s List, a comprehensive list of the ailments for which cannabis can be of use.

All the while, the cannabis tableau had been changing in the US. In 1970 an Illinois attorney named Keith Stroup had helped to found NORML. In 1971 President Nixon declared his war on drugs. In 1973 cannabis researcher Jack Herer began compiling clips of information on cannabis. In 1974, Thomas Forcade began publishing High Times Magazine. Somewhere thereabouts, in the temperate regions of Southern California and Hawaii, home cultivation of cannabis had begun to take off. In 1980 President Reagan declared cannabis the world’s most dangerous drug. Just about then home growers had begun to cultivate extra potent, sinsemilla plants. By 1985 Jack Herer had consolidated his clips and published his opus: The Emperor Wears No Clothes, now in its 11th edition. In 1988 High Times Magazine, then under the direction of Steven Hager, became the first magazine in the world to publish and promote Herer’s work. We resume our story.

Prohibitionist policies do a good job promoting collective amnesia, and many activists born in the late 60s and 70s new little or nothing about Mikuriya’s writings. For that generation The Emperor Wears No Clothes became the next powerful conduit to knowledge of medical cannabis. Although written largely to call attention to the power wielded by the chemical giant, Du Pont, in suppressing hemp production, it re-documented the centuries-long history of the plant’s medical use. It reintroduced the work of Mikuriya and O’Shaughnessy to younger western readers. West Coast Canadian activists Marc Emery, Dana Larsen, and David Malmo-Levine cite Herer’s book as the place they first learned that cannabis had medical value. How many others in North America would do likewise, I wonder?

This is as good a time as any to note that if AIDS and epidemic levels of cancer provided environmental occasions for progress in medical cannabis law throughout the 80s and 90s, public attention to epilepsy is essential to moving the issue along today. The matter of seizures deserves its own blog, so look for one in the weeks to come. But if I am permitted to ramble, it is worth recording now that medical authorities in post World War II America should have needed neither O’Shaughnessy nor Mikuriya to tell them than cannabis was an excellent anti-seizure medicine. Classified experiments both through the MK-Ultra and Edgewood Arsenal programs had determined this fact by testing cannabis on animals and then on patients, including institutionalized children. Roger Adams, who discovered THC and CBD in 1940, his associate W. Siegfried Loewe, Dr. James Ketchum and Dr. Van Murray Sim had already written up these results, and many years later in the 1990s, Sim phoned Mikuriya to alert him to this fact. Why weren’t they heard in the 40s? They were. This was the prohibition era, and the Federal Bureau of Narcotics had the studies buried.

Lesson: Don’t bury the past. Assignment: Get acquainted, or re-acquainted with one of Mikuriya’s legacies: O’Shaughnessy’s Online. The fight for dispensaries has a long way to go, and in this matter, history is a good friend.