Deprecated: The $control_id argument is deprecated since version 3.5.0! in /home/oq5ayjaeetjt/public_html/wp-content/plugins/elementor/modules/dev-tools/deprecation.php on line 304
 Medical Marijuana Regulation: A Call for Standards - Cannabis Digest
Skip to content

A Call for Standards

It makes me feel old to start off a story with, “back in the day”. But I suppose managing to stay alive as long as I have, I’ve earned the right to start off my stories with that old guy phrase.

With the recent U.S. House of Representatives approval of the landmark Hinchey-Rohrabacher Amendment to the 1.1 trillion dollar “Cromnibus Spending Bill” essentially blocking the U.S. Department of Justice from using any of it’s allotted budget to prevent States from enacting and implementing laws legalizing the use of medical marijuana. Quietly, without fanfare, apologizes, or explanations, the U.S. government has defunded the federal war on medical marijuana.

Polls in the U.S. currently show that 78% of Americans support States rights to allow access to medical marijuana. The switch has flipped friends, the dam is bust, the war is for all intents and purposes over for our brothers and sisters south of the border.  So, stand back and watch the industry go boom. Nobody does business like the Americans. Now that the legal door has opened we have an opportunity to witness all the good and all the evil that legal medical marijuana can bring. As a country on the verge of legalization ourselves we need to observe and learn.

The proprietary gold rush is well under way south of the border and with developing stories like the Stanley brothers and their high CBD strain Charlottes Web trying to get out in front of the potentially billion dollar CBD market before really understanding their strain and all it can and can’t do, problems can and have occurred. We will soon see multiple marijuana miracle strains pop up all over the place. What ails ya folks, cause the wild west medicine show is about to roll into your town claiming to cure everything from cancer to shingles. 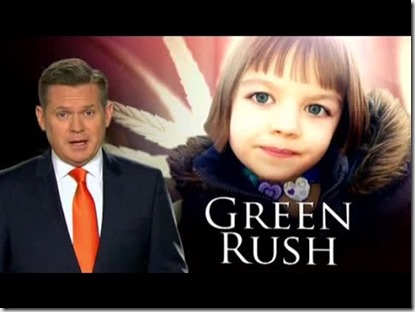 (image: Colorado Green Rush)
It’s all fine and good that the politicians are finally on our page, but are we ready for a world of unregulated medical marijuana? I don’t know about you but I think it’s foolish to open the door without some rules, regulations, and an agency with the authority to enforce them.

Here is the old guy part, back in the day, during the BC bud gold rush of the early 90’s, the California market set our standards in a pure capitalist and definitive way. When the man showed up to buy your harvest it had better be exactly what he wants or your out of luck. This simple economic fact was taught to me the hard way when I got stuck with 10 lbs of beautiful Northern Lights #2 that was suddenly “too red” for my buyers taste. Cali wanted half pound bags of 10 to 12 inch light green hash plant buds.

Grown indoors, hydroponically, and harvested early to ensure white hairs and maximum psycho-activity. Talk about specific tastes, but they were paying $4000 US a pound and money talks and bullshit walks man. The market can be fickle, naive, and in the case of medical marijuana patients, desperate for relief. Desperate and naive are perfect qualities for exploitation.

So here we are with a giant US medical marijuana market, the federal door suddenly wide open, and no industry standards, government regulations, or even common standardized testing criteria for medical marijuana. As activists this is the day we have been waiting for, so let’s pat ourselves on the back, and when we are done pattin’, let’s have a serious conversation about standards and regulation. 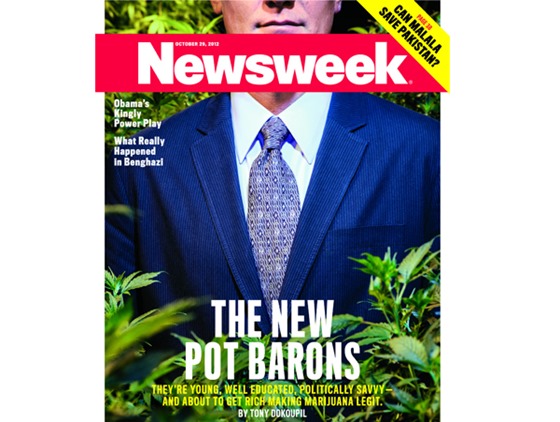 We have to get a handle on the strain game. Last week a US pharmaceutical company announced that it had been issued a patent covering the use of THC and CBD for treating brain cancer. This patent was initially filed in 2009 and essentially hands over control of CBD and THC , and any medicine that may be developed from them, to treat brain cancer to a corporation. The same corp. also announced that it had begun human trials on a high level CBD drug for paediatric epilepsy. Right out of the gate we are handing control of the plant to corporations. Why are we doing this? Have we not learned our lesson about profit motivated corporate control? Yet here we are allowing corporations to place patents on the plant that we as a movement have struggled to free. I don’t know about you fellow activist but I didn’t do time so some pharma. corp. can now tell me it owns the plant and I can’t grow it without permission. We need to protect medical strains from corporate control. In fact, we need to protect all “root” strains of indica and sativa from corporate patent. Hybrids and custom strains should only be patentable in the recreational market place, with medical and root strain ownership kept in trust for the people by a government appointed agency.

Colourful or wildly descriptive hippy strain names should be eliminated with regard to medical strains and replaced with simple scientific designations based on clearly documented genetic histories and the accurate chemical breakdowns of each strain or derivative medicine offered for sale to the public. We have to begin to speak the language of medical professionals when speaking about cannabis as medicine and supply them with accurate information about strains so they can prescribe with confidence. No medical marijuana or medicine derived from medical marijuana should be available to the public without first going through an extensive testing and approval process.

We have to get a handle on the claim game. The Stanley brothers and their high CBD strain Charlottes Web is a perfect example of making claims that after some time proved to be inaccurate. At least in the fact that they had not done enough scientific testing of their product before it hit the market and created a sensation of hope amongst the desperate parents of gravely ill children. Claims of effectiveness have to be carefully vetted. Strains claiming cures for cancers or other life threatening diseases must be put through intense scientific testing and should require agency approval substantiating all claims of cure or relief before being offered to the public.

So let’s name this little essay a call for standards. A call for accurate scientific designations and government protection. I think it’s fine for the recreational market to basically regulate itself, but the medical marijuana industry must be tightly controlled. Standards and policies must be developed and monitored for compliance. We must protect patients from hucksters and charlatans who will follow the money and prey on the desperation of the sick. We must protect people from others with good intentions but bad science.

In some cultures  if you save a life you become responsible for that life. As activists we freed the weed, now we are responsible for how we use it. Like any drug, marijuana should be carefully used when administered medically. Physicians should be fully informed of it’s benefits and properties in order to prescribe it effectively. Even though marijuana has a low risk of causing harm to patients, false hope created by the quest for profits can be devastating to someone battling for their life. Let’s start off the era of legal medical marijuana in the spirit of love and compassion that we have maintained in our movement from the beginning. Let us take our responsibility seriously and not let the heady success of our battles ending cripple the future miracles the plant has to offer.

By Owen Smith Cannabis Digest readers may have noticed that a good portion of my blogging over the last six months has included the tag “previously appeared at lift cannabis”. Lift is a website that helps patients to navigate the complexities of Canada’s medical marijuana regulations and gives patients a platform to explore and review […]

(Image: Fresh Headies) Making Dry Sift Hash Separating the medicinal ingredients stored in the trichomes head of the cannabis plant from the remaining inert material might prove to be the single most important step in making clean cannabis medicines. The bulbous glandular reservoir dangles precariously, like the cap of a glass mushroom, waiting for the […]