When will the sports governing bodies recognize medical marijuana as an alternative to prescription painkillers? Failed drug tests for marijuana consumption have been a consistent problem in sports. Sports leagues and governing bodies like the NFL, NBA, UFC, Athletic Commissions, World Anti-doping Association, International Olympic Committee and many more have all had athletes fail drug tests for marijuana. It’s time for the sports bodies to stop the punishment and shaming of athletes using medical marijuana.  Give them a medical exemption if they choose to use marijuana as an alternative medicine.

Are they afraid of the ignorant, outdated stigma of the reefer madness era? Are they not compassionate about the pain and injuries athletes have? Do they not realize how harmful prescription painkillers can be? Do they think marijuana is performance enhancing? It’s time for them to acknowledge marijuana for the medicine it is.

There is overwhelming scientific evidence of medicinal marijuana for treatment of pain and inflammation that is ignored by the governing sports bodies. Unfortunately this leaves athletes looking for painkillers and anti-inflammatories in a dangerous place where prescription painkillers are all too accessible. 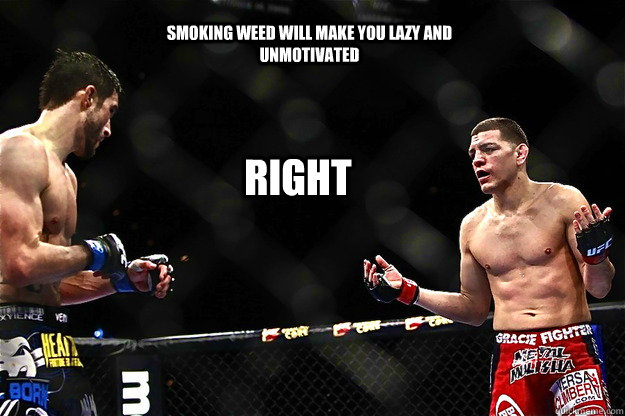 Failing a drug test for marijuana can have a detrimental affect on an athlete. Nick Diaz failed his drug tests at UFC 183 on Jan. 31, 2015. Diaz was suspended from competition for five years and fined $165,000. Diaz says he has been prescribed medical marijuana to help deal with his ADHD (attention deficit hyperactivity disorder). After an outpouring of support Diaz’s suspension was reduced to 18 months and his fine to $100,000.

NFL star Chandler Jones of the New England Patriots allegedly had a bad reaction to synthetic cannabinoids days before the AFC Divisional Championship game. He arrived at his local police station in the morning, half-naked, disoriented and seeking help.

So why was Chandler Jones, reportedly using it days before the NFL’s AFC championship game? Why would he indulge in a synthetic substance instead of real marijuana? Was he consuming synthetic cannabinoids because he is dealing with known injuries he has suffered this season?

Under the league’s drug policy, NFL players are banned from taking marijuana but not synthetic cannabinoids otherwise known as spice. Players are drug tested from April 20 to August 9. If their blood or urine tests past 35 ng/ml, a player will automatically register a positive test and be entered confidentially into the NFL’s two-stage drug program. A failure to comply to a treatment plan would lead to a three-game fine and entrance into stage two. An inability to complete the drug rehab plan in stage two would result in a four-game suspension. With that type of punishment one can understand why an NFL player would rather take synthetic cannabinoids and risk the dangers of a chemical that isn’t banned.

No NFL player has ever received an exemption to use marijuana for medicinal purposes. According to the National Organization for the Reform of Marijuana Laws (NORML) 23 states in the United States allow doctors to prescribe medical marijuana, but the NFL still doesn’t permit it for medical use.

A movement of former players is pushing the NFL to allow usage of medical marijuana as an alternative. These players have expressed how they found recovery for their bodies easier with medical marijuana.

“Back then it was painkillers. I played my whole career on painkillers. I was using about 100 Percocet’s a month when I retired and I knew I had to get off that stuff. I’ve had 18 surgeries so pretty much everything on me hurts. I had a broken neck at some point in my career and nobody told me about it. So I’m lucky to be walking,” McMahon said.

He had good reasons for the high use of painkillers, but says: “I quit all that cold turkey and I moved out to Arizona and I got my medical marijuana license.”

McMahon says he not only has found relief, but marijuana is now the only drug he uses to control the pain.

“I don’t smoke all day long you know. It’s usually in the morning. Mornings are rough trying to get up out of bed,” he said. “It’s been quite a few years so I don’t feel it impairs me at all. I can still function, still talk to people, do whatever I got to do.”

“It’s a lot easier on my body and I can get through the day without a problem. It doesn’t have any side effect. You don’t get constipated, you don’t get woozy and feeling weird. For me, it works,” McMahon said.

If the NFL changed its stance on medicinal marijuana would we see a reduction in their issues with painkillers? Could medical marijuana have prevented the tragedy of Tyler Sash of the New York Giants? Sash was found dead at his home on Sept. 8. 2105 The Iowa State Medical Examiner’s office found he died from an accidental overdose after mixing two powerful pain medications. A history of painful injuries was a contributing factor. He died at age 27.

According to the Center for Disease Control and Prevention on average, 44 people in the U.S. die every day from an overdose of opioid prescription painkillers. This is more than the number of deaths from heroin and cocaine combined.

Players have come forward saying they are forced by their teams to take prescription painkillers. Over 1,300 former players have filed a lawsuit against the NFL claiming that the league obtained and administered the drugs illegally without prescriptions and failed to warn players about potential side effects, all in order to expedite the return of injured players to the field and generate the highest possible profits.

Marijuana is much safer than NFL-allowed prescription painkillers and very effective. Cannabis has 20 times the anti-inflammatory power of aspirin and 2 times more then hydrocortisone. The psychoactive component of marijuana- THC can be removed if desired. One can still receive the painkilling and anti-inflammatory properties of the plant without being high if they choose.

According to the National Cancer Institute it is not possible to overdose on Cannabis. And here’s why:

“Cannabinoid receptors, unlike opioid receptors, are not located in the brainstem areas controlling respiration, lethal overdoses from Cannabis and cannabinoids do not occur.”

Leafscience.com further explains that; “Marijuana and opioids affect different pathways of the body. Opioid pathways, also known as receptors, are present in areas of the brain that control breathing. As a result, taking too many painkillers can cause a person to stop breathing. But marijuana acts on a completely different set of pathways. These pathways are called cannabinoid receptors and they do not affect respiration. Thus, marijuana cannot cause someone to stop breathing, no matter how much they ingest.”

With the high risk of overdoses, addiction, and toxic combinations of prescription painkillers its time for sports leagues and governing bodies to evolve. Its time to throw out outdated judgments, accept the facts and allow medical marijuana exemptions. Athletes like everyone else should be able to have the option of choosing a safer medicine.

The Health Canada Hustle; Concentrated Cannabis Oil; Toronto Vapor Lounges and more from the Cannabis Digest this week November 29nd – December 5th, 2014 with Owen Smith Subscribe to the Youtube Channel!   Saturday Al Graham part of a new commercial industry—a business that caters to consumers in a way to allow them to consume […]

Helen Davids New Research Shows Patients with a Choice Opt for Cannabis over Prescription Meds Research undertaken by the University of British Columbia and University of Victoria has shown that given the choice, those suffering from chronic pain, and those taking medication for mental health conditions, would choose cannabis over their medication. Lead author of […]

A Survey of American Medical School’s Acceptance of the Science of the ECS (Endocannabinoid System) By Dr. David Allen, Nathan Stewart, Sioux Colombe and Ron Mullins   Introduction The discovery of the endocannabinoid system (ECS) is the single most important scientific medical discovery since the recognition of sterile surgical technique. As our knowledge expands, we […]