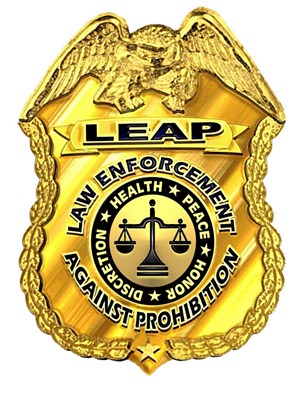 John Anderson, a professor of Criminology at Vancouver Island University, was recently made the Nanaimo area speaker for Law Enforcement Against Prohibition. I got in touch with him in late November and he told me all about it.

To start with, what exactly are a LEAP speaker’s duties?

Well, I think you have to know a little bit about LEAP first. Law Enforcement Against Prohibition are peace officers who are taking a stance that is contrary to most members of their organization—their whole legal and prosecutory community. Being a spokesperson for LEAP means that you have some affinity for their values for whatever reason, either as a former peace officer or as a currently active one. I fall into the former category—I was a peace officer at the Vancouver Pre-trial Services Centre from ‘83 to ‘88. And even back then, I was aghast at what our drug policies were doing to people. That was something I would share with a few people I worked with, as well. I was rubbing shoulders with other graduates of SFU, and at that time it wasn’t often that we found too many correctional officers with baccalaureate degrees in Corrections, and I think we tended to be a bit more critical than other members of the rank and file [that had been] in service for a decade or two before us.

These degrees, they gave you the background needed to think outside the box?

Well, I think all of us at some time or another took courses with Neil Boyd and John Lowman, who were critical about Canadian drug policy, not because of their personalities, but because of the research that they’d read. So I think the persuasiveness of LEAP’s stance, at least in academia, is the evidence that they muster to support their position.

You’re the first LEAP speaker in Nanaimo. Aside from yourself, how much presence does LEAP have in Nanaimo?

Probably, almost none. There’s some presence in Victoria with David Bratzer, but my speaker’s profile has yet to be published on the LEAP website—which I understand is forthcoming. It’s a pretty exhaustive process to be recruited as one of LEAP’s speakers—it’s certainly more rigorous than anything I’ve experienced in a non-profit group. I think that Nanaimo is probably ready for a conversation about the futility of drug prohibition, and I say that because despite all the efforts in the 20 years that I’ve been here for Nanaimo to prohibit the use of illicit drugs—I don’t think the police themselves can point to a great deal of evidence that they’ve been successful. So I think it’s time that there are other voices—I’m certainly not the only one. There are certainly other voices that are encouraging re-thinking prohibitionist policies. And I’ve got to be honest—the work that I’ve been doing in the classroom dovetails exactly with what I would expect from one of their spokespersons. In other words, present the evidence and think about rational arguments. Why are we doing the same thing over and over again, expecting different results, and getting the same results? That’s the definition of insanity, according to A.A.

Does your opposition have a lot of evidence for their position?

I’m interested in learning about the evidence the opposition has because as a social scientist, I’m willing to revise my opinion if I can be presented with evidence that shows that drug prohibition policies are actually working. And I’ve actually done an about-face on my own stance with respect to gun control. But that’s a separate issue. One of the things that I said I would do was explore the other argument, not to be a good debater, but just so that I can be informed. Maybe they’ve got some perspectives that go beyond whack-a-mole. Are you familiar with whack-a-mole? You think you’ve solved the problem by whacking one problem down, and then it just pops up in another form. It’s illustrative of what happened when the Americans thought that they had defeated drug trafficking from Central America with the killing of Pablo Escobar. It didn’t do a thing. There were other groups that took over his market, and there’s more cocaine coming through Mexico than there’s ever been. On and on it goes. I think the Canadian public, in terms of safety, deserves an alternative.

Do you think a national referendum in Canada would lead to legalization?

I’m not so sure, because the extent to which people believe in decriminalization varies by province. Alberta is much more conservative than Quebec or B.C. Some of the polls I’ve read—63 percent of British Columbians are in favor of the decriminalization of marijuana, and up to 80 percent are in favor of medical marijuana being used. We’re liberal in many respects on the West Coast, and I think that we’re less likely to accept the propaganda that finds its way into the media.

There are a number of different ideas on how much control of a substance is necessary. For example, some say there should be no controls, and others say there should be a system similar to that used for alcohol and tobacco. What sort of system do you think would work best?

LEAP’s position is that the ownership of the drug problem, at the individual level, is the property of the individual and their physician. The government’s role is more regulation than anything else. It’s not about making a profit off the sale of marijuana; it’s about regulating drugs. The government would regulate, as it does alcohol, and sale and distribution of Marijuana. And that could be in the form of issuing private growers’ licenses.

A while back, Portugal legalized every single substance, but mandated that people who are heavily addicted would have to be counseled, to help them kick their addictions. Would you support something similar here?

Anything we do in Canada has to be done slowly, and with evaluational research accompanying it every step of the way. I don’t think we’re ready for a de facto decriminalization of all drugs. We can start almost immediately with marijuana. That’s something that I’ve been hearing since 1976. The government, for fear of losing votes, is loathe to decriminalize marijuana. I think that they much prefer to sustain some of the myths that have been perpetuated because it allows them access to a particular electorate that supports them in a large way.

There has been some speculation that there is an influence from the U.S., and that has played a large part in the reason it hasn’t been decriminalized. Do you think this is the case?

It’s absolutely the case. The U.S. has had a direct and powerful influence on Canadian drug policy, and they’ve done the same thing worldwide, threatening all kinds of penalties and sanctions to states that don’t fall in line with their particular vision of what healthy drug policy should be. I think that LEAP and myself personally—we agree that the way drugs are distributed in their present form—the drugs that we call illicit—is dangerous. It’s dangerous for the users, it’s dangerous because of the black market status of the drug. It’s not the pharmacological properties of the drug. I’ve got a video that I show my students where heroin users in Amsterdam and Liverpool are taking heroin that they’ve got from their chemist, or pharmacy, before they go to work. What makes them different is that they’re not spending a large portion of their day trying to steal enough money so that they can buy drugs on the black market. It’s the black market status of the drugs that causes the problem. That’s where anti-prohibitionist policies can be effective if governments take them seriously.

What are some of the challenges or barriers you’ve encountered as part of LEAP?

I think that the biggest challenge is the current Federal government and the position that they’re taking. And I don’t think the Liberals in Victoria are any less “small-c” conservative than the “capital-C” Conservatives are. For the Harper government, it’s an ideological matter, and there’s no amount of evidence or rationale that’s going to change their minds. And that’s the biggest obstacle: getting beyond the rhetoric and trying to encourage politicians to take a rational approach to this. If we don’t, other countries will, and are, and their evaluations are going to continue to show that they have less damage to society, less property crime, as they pursue these types of policies, and with the aid of the Internet and the dissemination of information that’s outside of authorized channels in the media, I think there’s an opportunity for Canadians to start demanding a wiser drug policy from federal politicians.
What’s the next big step for anti-prohibitionists?

I think Canada could go a long way with its position in the international community, to do something really progressive, and we have been a bit of an outlier in foreign policy. Canada has taken the role of being a country willing to send troops into everywhere we’re needed, and I can’t think of anything more pacifist for Canada to do than to take that lead and actually begin bringing in some policies that actually make sense, do some scientific evaluations by researchers, and then show the world what’s possible. That’s the lead we can take. Unfortunately, we’ve got a big brother next door, who’s got a big stick, and they can manipulate that stick in so many diplomatic channels that it’s a little frightening.

(Special Thanks to GreenCamp for submitting this awesome interactive infographic)   You might have noticed that not all strains smell the same. Pine, berry, mint…There’s more than a few distinctive fragrances in cannabis… Read More Here