One day this month, the Canadian Task Force on legalizing and regulating cannabis will announce its proposed program. Meanwhile, on May 9th 2017, BC residents will face a provincial election. At issue for cannabis fans in BC is the fate of the local cannabis industry, a multi-billion dollar economy representing growers, processors, dispensary owners, and associated staff, about 13, 732 of them, according to a recent economic report. In anticipation of both events, the BC Independent Cannabis Alliance, headed by local activist, Ted Smith, will be planning a series of public debates. So I thought I’d spend some time thinking about parameters for such events. Here goes.

1. DEBATE/DISCUSSION/DIALOGUE. Each of the preceding aims to inform, to educate, and to uncover the truth. Debates are competitive events. They have winners and losers. Discussions are similar, but less formal, and sometimes less competitive. Both are inclined to get people thinking. Dialogue is different. Its purpose is to approach a mutual understanding, and thus to establish a workable solution, or compromise. Ideally, in an exercise in public education, we get a bit of everything. What we’ve seen thus far in the way of ‘debates’ in this province, have actually been panels: the participants set out their views, the chair poses questions to specific panelists, and the audience members are invited to chime in with their concerns. The panels are informative, but these events fall short of debate, as their focus tends to drift, and people often talk past each other. That’s not always a bad thing. Indeed, where public education on cannabis is poor, as it is today, it may not be possible to stage a real, widely attended debate.

2. THE MATTER OF QUESTIONS. Still, focus is important. A focused discussion will centre on a major question posed by the chair, announced in advance of the event, so participants can prepare, and audiences can anticipate. Not all questions can be raised in all political times. They must be graded according to the level of public enlightenment. It is useful to imagine debate topics set along a scale, running from crude to subtle, or, beginner to advanced. A very crude question would be: Should we jail cannabis users, or just ticket them? A more civilized beginner question would be: Should we legalize cannabis? But that kind of question brings out the prohibitionists. Luckily, we seem to be past these. A very advanced question would be: Should we allow vertical integration in the cannabis market? Or, What market structures best ensure safety, quality, and diversity for cannabis? It is my guess that neither the general audience in BC nor the politicians will be ready to address these questions, as they assume prior experience. An intermediate question, and one we could manage is: Should we favour a government monopoly on distribution (as we used to with liquor sales) or a free market? Or, liquor stores have been lobbying for exclusive rights to retailing, based on their claim that they represent the safest solution. Are they right?

3. THE PROCESS. Often lacking in the panels I’ve seen is rebuttal. One person, or side, makes a point, and no one makes sure that the opposition responds to it. That shouldn’t happen. In the ideal debate, each point is addressed. This practice avoids dropping the ball on important subjects. If one side states: recent studies show that monopolies don’t work for the following reasons, the other must address these reasons directly. If one side quotes the 2002 Senate Report on Cannabis, responders must address the quotation, and must not be allowed to change the subject. If the debaters are politicians, the poor moderator may find him/herself in proverbial cat-herding mode. Career politicians are used to pontificating, not debating. Even so, an effort must be made to remind people to talk to each other directly. If the effort fails, it will still help the audience. 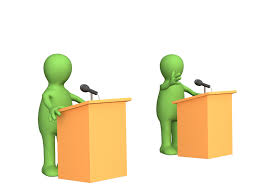 4. THE PARTICIPANTS. Finding suitable participants at this stage is a puzzle. Panelists must have enough authority, or perhaps fame, to attract an audience, and draw the media. For the upcoming debate series, a few options can be considered. One is a panel of representatives, one from each of BC’s major political parties. Given the upcoming election, this is an important option. But it’s an awkward one. First, it is unlikely that prospective MLAs will want to expose themselves in such a debate. But prominent members of the various parties might. This option would give us something like an all candidates meeting, but on a specific topic. For that group, it may be best simply to ask each candidate where he/she stands on allowing the gray economy in BC to become licensed and legit. But…maybe we won’t get much debate; what if they all agree? It’s not really a left or right wing issue, and maybe all parties want to see those billions stay in the province. I suppose one could screen candidates for variety in opinion. Second, it may be difficult to find prominent party members who are well informed on the plant, the local industry, and in general, the war on drugs. As a result, points raised by one panelist may not find an informed response from others. The moderator will have to do much creative navigating. Members of the audience might be called upon to fill in the gaps.

A second option is a panel of experts: public health specialists, cannabis historians, criminologists, lawyers, doctors, scientists, and so on. With experts one might have a better chance of finding people who can speak well, pro and con, on a given topic. Further options include MMAR growers or members of the Cannabis Growers of Canada, dispensary owners, journalists, and other prominent citizens like mayors, or city councilors. Ideal debate conditions will be lacking, as there are likely to be mismatches amongst participants’ levels of understanding. But any way it is planned, such an event is bound to inform and educate.

5. THE INTENDED AUDIENCE. Who needs an education on cannabis? The general voting public does; information from institutions like Health Canada, for example, is pathetic. Politicians do. They need to become better informed. We do. To target audiences better, we would benefit from demographic analysis. What is the age, gender or ethnicity of people friendly to cannabis? Should we target specific groups or areas? Should we have debates for seniors? Or women?

6. VENUES. Venues will influence who will come. Places carry levels of authority too. The University of Victoria is good. It will draw students and locals. On the other hand, it is an hour away from town by bus, hardly a welcome prospect on a dark, chilly evening. One must choose other places as well. Good choices include high school gyms, church halls, libraries, community centres, and live theatres on off nights.

7. RESIDENT FEARS. Whatever events emerge from this effort, they will be bent by longstanding fears: cannabis consumers are predators, who want to sell to kids; they are irresponsible, and will cause traffic accidents; they will develop health problems, and be a burden on society. Such fears lie behind the heavy-handed approach seen thus far in Health Canada, and too many newspapers. If the upcoming debates address and quell these fears, even a little, they will be well worth the effort.

8. MEANWHILE, WE WAIT. It is now November 21st, and the feds have promised a detailed announcement by the 30th. If the past is any indication, they will deliver on time, if not early. Let us pray that reason will prevail.

Updates from The Cold Eastern Front

Digest Admin·April 17, 2015
There are no comments yet No comments