Deprecated: The $control_id argument is deprecated since version 3.5.0! in /home/oq5ayjaeetjt/public_html/wp-content/plugins/elementor/modules/dev-tools/deprecation.php on line 304
 Review: High Times' - A 40 year history...
Skip to content 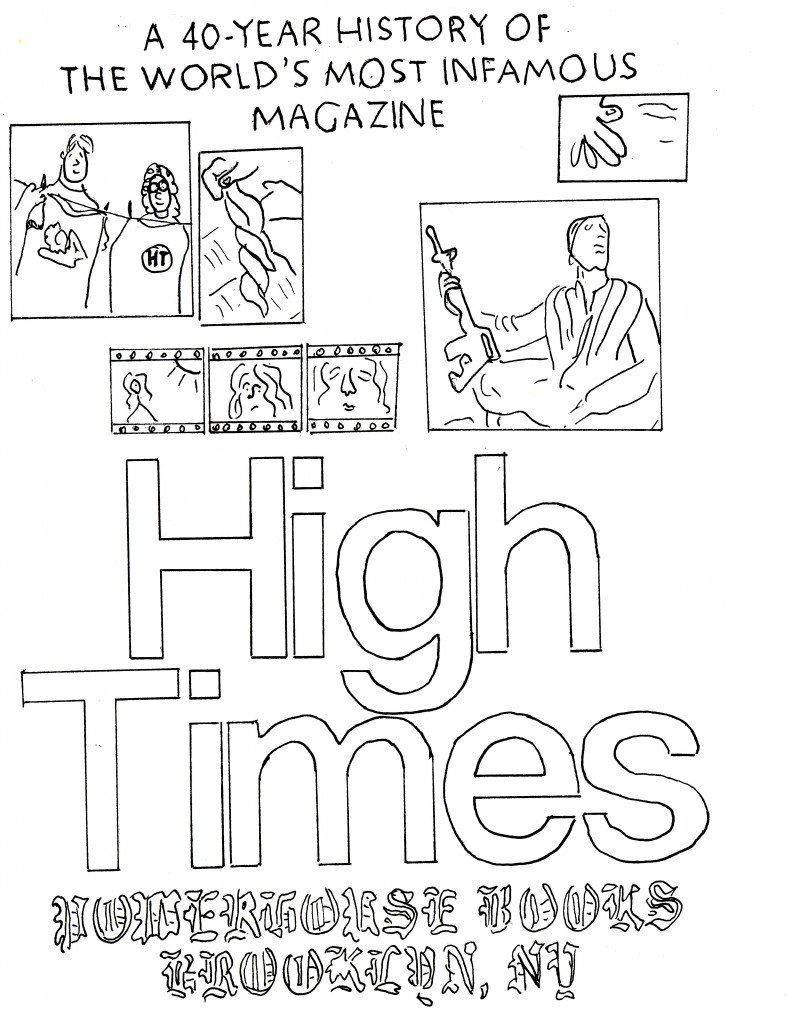 In 1974, late activist Thomas Forçade invented and began publishing the pro-marijuana magazine, High Times.  This year the magazine turns forty.  In honour of its birthday Forçade’s Trans High Corporation has published the retrospective:  High Times:  A 40-Year History of the World’s Most Infamous Magazine—self-styled both a “visual history” and a “coffee table book.”  A coffee table book it is; a history book, well maybe.  Still, High Times is an icon and a history, even a purported one, is certainly worthy of thought.  So here goes.

Let me say at the outset that introductory words provided by managing editor and legal counsel, Michael Kennedy, are alone worth the price of this tome.

[su_quote cite=”Michael Kennedy”]The forces of darkness arrayed against a pro-pot magazine in the post-‘60s hangover of the mid ‘70s would have daunted any serious effort to bring about significant social change.  However, High Times was neither serious nor significant, both of which contributed to its longevity.[/su_quote]

Powerful and haiku-like in their succinctness, these sentences lead straight into the tangle of High Times’ philosophical cross-streams, now reflected in the official history.  The publishers could well have ended the book right there, and invited HT’s regular readers simply to meditate.  The problem is, HT has many sporadic readers and even more nonreaders, and for these it is not clear from the History what they are being invited to do.

High Times:  A 40-Year History (HTH) is a post-modern text, I think—a sort of non-book.  Readers are offered no information on the book’s contributors.  There is no index.  The Table of Contents, never actually named, is hard to use.  Only the pages featuring essays or interviews, 47 out of the book’s 296, are numbered.  If you look for a specific essay you will be going on a minor hunt, riffling through pages.   If you want to find that spectacular full-page photo of a flower you saw yesterday, you’ll have to go on a major one.   Contents information is not always accurate.  Chris Simunek’s essay, “Lost and Found” is listed as starting its account from 2005; it starts in 2004.  The ‘1984’ interview with John Waters interview took place in 1983.  There is no timeline, and no historical catalogue of editors and major contributors.

Oversized, with thick cardboard covers and hefty, ultra glossy pages, HTH features blocky sans serif lettering paired with gothic script.   It provides a gallery of the magazine’s covers in chronological order—helps with finding stuff—set to appear as if pasted onto faded green wallpaper by the team that produced the high school annual.   Similar pages are filled with photos that evoke 1950s kodachrome prints left too long near a sunny window.  They are hard to decipher.  Some of the letters are tiny.  For these pages you will need a magnifying glass.   But many photographs are clear and wonderful, and all are at least interesting.  This layout style reflects the views of artists Dante Carlos and River Jukes-Hudson.  It is studiedly clunky and intended, I think, to keep us off balance—an art vitamin of sorts.

HTH has no overall narrator.  Rather the magazine’s story is told in four essays, written by four different editors, each describing a decade.  These are complemented by four reprinted interviews.  The essays chronicle the politics that surrounded the magazine, and its responses.  They tell us what subjects it has covered.  But they give us very little sense of HT’s inner life—its power structure, for example; or what it’s been like to work for High Times; or how many employees have come and gone; or how have they gotten along.

The book echoes the magazine’s commitment to ending the war on drugs, and also its competing viewpoints.  In a rare glimpse of life at HT, editor Dan Skye describes this heated argument between an editor and libertarian publisher John Holmstrom.

Editor:  The mission of High Times is love and peace.

Holmstrom:  You’re wrong.  High Times is about doing whatever you want to do and fuck anyone who tries to stop you!

There’s nothing like a radical divide.  Danny Danko, reporting on the years 1984-1993, returns to love and peace.   He speaks well of editor Steven Hager, whose long leadership at HT brought with it a commitment to cannabis spirituality.  He also provides a good discussion on the shift in that decade from importing marijuana to home growing.  Bobby Black on the years 1994-2003 has a more technical outlook.   He tells us for example that savings created by the advent of desktop publishing and graphic software induced the magazine to move to full colour and better quality paper.   Chris Simunek, current senior publisher, on 2004-2014, offers botanical romanticism.

[su_quote cite=”Chris Simunek”]The whole purpose of a flower is to attract…it beckons to be touched… Likewise, the flower is what makes High Times stand out in the wilderness of the newsstand.[/su_quote]

We could call that love and nature.

A wider range of viewpoints is reflected in the interviews HTH editors chose to reprint for this book.   They are with:  The late Bob Marley, John Waters, Noam Chomsky and Roseanne Barr.   Marley has the corner on spirituality.

De truth is the truth of Jah.  Marley didn’t know if the government of the day would legalize marijuana, he said, but he knew that Christ’s government would.   Chomsky, at the opposite pole, is a hardheaded social scientist, the left leaning variety.  The poor, he argues, are seen as superfluous for wealth production.  So the wealthy want to get rid of them.  They scare them, arrest them, incarcerate them and benefit from their prison labour.  Marijuana is the perfect vehicle for this purpose; its fans are easy to arrest.

Interviewee Roseanne Barr takes a similar view.  She calls American politics fascist; she’s been a fan of the Occupy Wall Street movement.  She enjoyed her TV role as a member of the American ‘lower classes.’  As she put it:  “I feel like I was the first socialist on TV.”

These historical views, opposites and all, sit together in reasonable comfort.  But then we meet filmmaker John Waters, purveyor of a bizarre species of nihilism.  Known for his grotesque imagery and delight in shocking audiences, Waters begins his interview at HT with: “If someone vomits watching one of my films, it’s like getting a standing ovation.”  Waters’ hobby is attending prominent criminal trials.   Here’s a bit to chew on.

[su_quote cite=”John Waters”] The case that has obsessed me the most was the Manson case…Not that I approve of what they did, but they really did scare people.  It finally ended the hippie movement thank God.[/su_quote]

Charles Manson, for those who don’t remember, was the leader of a quasi-commune in California whose members carried out seven murders in 1969.

Waters dislikes pot.  He considers it a children’s pastime to be dropped by age 21 at the latest.  Otherwise one becomes lazy and stupid.  Waters is a method actor channeling a perverse persona, or else he just wants to offend.  But he must

offend in some special way because out of all possibilities, the creators of HTH chose to include this interview.   Perhaps it’s a tribute to Thomas Forçade, portrayed by Kennedy as a libertarian with no fixed moral centre.

It is no secret that over the years High Times has annoyed even pot fans.  It has been a staunch advocate for all things cannabis.  But it has also featured cocaine, and hyper-sexualized images of women.  High Times:  A 40-Year History echoes these these crosscurrents.  If you favour ethics you’ll appreciate narrator Danny Danko.  If you prefer sleaze you’ll like Dan Skye, who enjoys the shots of ladies in leather.  If you want fantasy you have Michael Kennedy professing faith in the American “free market.”  If you like abstracted female body parts, you’ll find those too.  In Kennedy’s view this flexibility has helped HT to survive.  Maybe it has.  But contradictions that can fuel a magazine work less well in something called a history.  HTH is entertaining and informative, especially if you are not perusing it for anything in particular.   But as the story of the life of High Times it lacks coherence, and comes across as oddly vacuous.   It says too much, and tells us too little.

[image : Beth Hutchinson (04 March 1993 – 25 October 2013)] In a previous Blog I told my sister’s story of how cannabis eased the suffering she experienced from her Melanoma cancer treatments, offering a necessary quality to the end of her life. My family are among many whose lives have been directly impacted by […]

No one in the Old Testament commands as much respect as Moses.  He is a founding father of the Church, respected by the Jews and Christians for saving the Hebrews from Egypt and for bringing us the 10 Commandments.  Indeed some might argue there would be no Jews or Christians without him. What gave Moses […]

The Ukrainian Origins of Cannabis Legalization

Owen Smith It may come as a surprise to some but not to others that the country fighting for democracy and freedom in the world is also the origin country of the people who began our path to legalization in Canada. The people who I’m referring to are the Doukhabor Ukrainians of the Canadian prairies.  […]