Last August, I went on a pleasant three week holiday across three lovely provinces, camping in B.C., visiting relatives in Alberta and landing at a family gathering in Saskatchewan. It was a relaxing trip and we and along the way there and back we visited many friends and relatives. It was the finest holiday ever until my wife and I were arrested.  Until I was charged with possession of marijuana for the purpose of trafficking.

Near the bridge at Yahk, B.C., the RCMP set up a contraband roadblock to check cars entering town for the weekend’s music festival. At the time we only paused to check our map before passing it bye, unaware we were going in the wrong direction. It was only a few moments later when we realized that we were being pursued at top speed by a police cruiser. 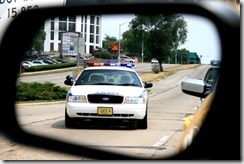 My wife was in control of the car, having taken over for me after six hours of driving.  I was smoking on some fine bud to relieve the fatigue and arthritic pain in my hips, shoulders and legs.  I had my Health Canada license in my possession.  When an officer of the Cranbrook RCMP said to my wife at the window, “I believe I smell marijuana”, I wasn’t concerned.

Another officer then appeared at the passenger door.  He was a rather friendlier fellow,though he demanded that I “step out of the car, please.” This officer appeared to have misgivings about arresting a little old man and lady for pot.  Occasionally he rolled his eyes, making faces throughout the entire encounter.

“Yes, the cannabis is mine,” I said. “I am a licensed Health Canada patient.” I continued, reaching into my beat up hemp wallet and pulling out my nearly worn out office sized pink sheets. The second officer took it from me, read it over and, tossing it on the trunk of my car, said to the first officer, “This is worthless, it’s expired.” I was told my car would be searched, which it was.  They easily found my supply, stored in my medicine bag with my various other items, much of which the RCMP eventually just kept.

Once my wife and I returned to a safe haven and I recovered from feeling criminalized, a friend suggested that I had the element of surprise in my favor.  He suggested that if I responded first, I could potentially gain the advantage and beat the charges. So I quickly found the documents I needed to contest my charges,  and two days after my arrest I filed a legal petition the courts and demand my medicine be returned!

Next, I obtained legal counsel through BC Legal Aid Society, who were very helpful in obtaining a local lawyer in Cranbrook who could defend me. The lawyer in Cranbrook was already knowledgeable about the Allard case in Vancouver and familiar with the MMAR, so was able to legally explain the situation when he approached the crown prosecutor to address my charges. Trafficking charges were then dropped by the crown prosecutor, and the RCMP was ordered to stand down.

The RCMP remained stubborn, and quibbled over what would be returned.  Based on the limit allowed at the time of the license, they only returned 90 grams of the medicine a wooden and glass pipe encrusted with resins on my insistence.  They kept over 271 grams of medicine and a hundred and fifty dollars’ worth of my other medical devices like papers, grinders, kif box, and my personal scales.

It was a legal win, but my financial losses were over fourteen hundred dollars, so there is a cost to having some skin in the game. In my opinion, the RCMP acted like petulant five year olds when it came to giving back what they had confiscated. 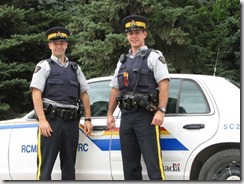 A short while later I got a call from the ‘Officer on Duty’ at the Cranbrook RCMP. This officer informed me that as a result of my arrest and charge, the case against me and the subsequent loss of said case, that he had been required to meet with all the branch commanders in the interior of British Columbia to discuss the legal ramifications, using my case as an example. He told me that he was instructed to ensure that other commanders were properly informed about the seemingly expired MMAR licenses and instructed them to pass orders down to their officers on duty that these MMAR licenses were to be honored. Officers would also be instructed to no longer arrest patients who showed this Identification.

So, if you are a MMAR patient with one these pink license sheets, be aware that the RCMP must now consider them VALID until such time as the Allard et al v. Canada FCTD T-2030-13 and FCA A-174-2014 cases are resolved. In the meantime, officers should be bound by their oaths to keep up with the laws regarding licensed patients and the possession of their medicines by  refraining from arresting patients who show this identification.

I disliked being dragged through this unpleasant experience. I’m happy that I fought back, and I encourage others not back down when faced with unreasonable laws. To their credit, RCMP members went from interrogative to respectful once educated, which impressed me greatly. It proved to me that education could overcome institutionalized ignorance. That itself was evidence of the great progress the cannabis community has made over the last decade.  It is, to say the least, an encouraging trend.

Author of “Medical Growing: a Garden of Peace”

From The Archives: Letter to Police Chief Sets Tone for VCBC

By Ted Smith Founder, Victoria’s Hempology 101 Society March 19, 1997 Dear Doug Richardson Your quick response to my letter is much appreciated and I apologize for replying so slowly, but such things require the utmost patience and careful attention. I welcome the opportunity to further explain my activities as president of Victoria’s Hempology 101 […]