Deprecated: The $control_id argument is deprecated since version 3.5.0! in /home/oq5ayjaeetjt/public_html/wp-content/plugins/elementor/modules/dev-tools/deprecation.php on line 304
 The Schlichten Decorticator - Cannabis Digest
Skip to content 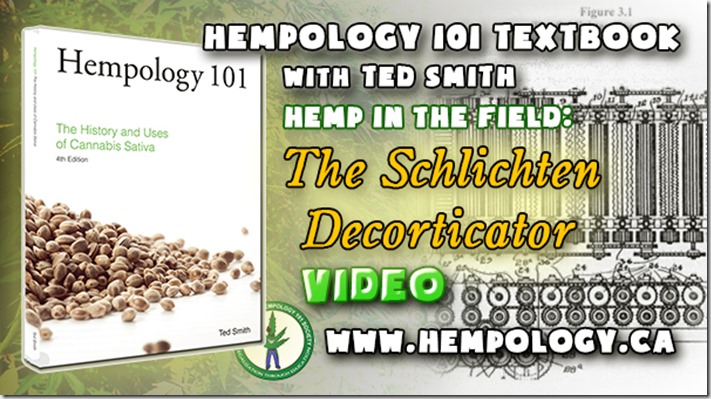 Perhaps the most important moment in the history of cannabis was in 1917 when George Schlichten announced to the world that he had invented a machine that could easily harvest hemp into high quality raw materials.  Instead of propelling hemp production into high gear, however, this was the final straw for Wall Street, which immediately began collaborating to eliminate the plant from the economy.  The potential impact of this incredible machine will never be truly known until it is widely available around the world.

For decades inventors had struggled with making a machine that could easily harvest the tough fibers of the hemp plant without ruining them for clothing.  Since it was so tough, every other attempt to create a combine that could cut the plant down and split the inner cork from the fibers in the field had proven futile.  George’s invention could take off the top leaves for fertilizing the next crop and separate the cork, or hurds, from the stalk, leaving the fibers in beautiful shape for spinning into fabric.

Combined with the announcement the previous year that the hurds could be made into paper, this invention made hemp much more practical and profitable for farmers to grow.  Suddenly the only waste product of hemp was valuable and the amount of labour needed to harvest dropped dramatically, with the fiber being worth far more than ever because it was in such good shape.

But it was not meant to be.  This announcement gained the attention of some very aggressive and resourceful individuals who were willing to go to great lengths to beat any competition for money and power.  Later in the chapter on prohibition I will discuss more about the circumstances that lead to this virtual ganging up on hemp.

For more information please purchase my book, HEMPOLOGY 101: THE HISTORY AND USES OF CANNABIS SATIVA.

By Ted Smith for the Cannabis Digest Rarely does an opportunity to act in a feature film fall into your lap.  It is almost impossible then to be asked to virtually play yourself in the movie, even getting to introduce yourself, using your real name in your own place of business.  An illegal business, to […]