One of the stereotypes faced by cannabis consumers is that we are lazy.  Team 420 is going to change that.  It is time potheads came out of the closet.  It is time to have some fun.

On Saturday Aug 8 the first Annual Team 420 Dodgeball Tournament will be held on the back lawn of the Victoria Courthouse.  In years past, Team 420 has entered into a local dodgeball tournament and organized weekly dodgeball games but the project never really took off.  After much consideration, it is time for Team 420 to put its own tournament together, combining cannabis activism and sports together for a whole new experience.

Starting at noon, contestants will gather to smoke pot and throw some balls around while teams are formed, with the final game expected about 5pm.  A break is expected around 420.  Contestants can sign up at 826 Johnson St or show up early on Aug 8 to make sure you get on a team.  Each team will have 1 female, so with 8 teams playing there is only room for 42 guys to play.  Players will not be allowed to form their own teams, making it fair and fun for all.  While everyone wants to win, this is more about having fun.

The $5 entry fee will help cover costs, and each contestant  can expect lots of prizes as this is the first ever event organized by the International Hempology 101 Society that is officially getting sponsors! We are very pleased to announce Crop King Seeds, Sacred Herb, Beard Bros. Concentrates, Jupiter and the BC Smoke Shop are all sponsoring this event and hopefully many more into the future. This new income will help our non-profit society get the word out by covering the costs of printing more posters and other expenses. 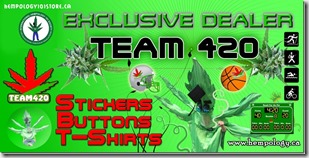 Some may refer to the games that day as dab-ball.  With a new fad of doing various types of honey oil in fancy equipment becoming very popular, many contestants are expected to be taking dabs before, during and after playing in the games.  There are few things as entertaining as watching a bunch of stoned people playing dodgeball while puffing on a joint on the sidelines.

If this tournament is as successful as we all hope, next year you can expect Team 420 to go on the road and host events in other cities.  Of course, if others wanted to sponsor their own team 420 events, that is absolutely encouraged.  Limited time and energy mean this is all we can manage this year.

This will be the second attempt to get Team 420 off the ground.  A few years ago it was much more active, with over a year of weekly dodgeball games, months of soccer games, some frisbee golf days and as an individual I have ran in three 10 Km races, the Times Colonist 10K twice and the Vancouver Sun Run.  Each race I ran in Herb, our groups 12 foot tall mascot.

Next year I plan upon getting back into the half-marathons and will keep everyone posted so we can get lots of video and pictures.  It would be great to have support from other runners who want to come along with me so we can bring the Team 420 flag.  More details will come in the new year.  For now it is time to play ball.

Introduction   Cannabis produces a fantastically wide array of different compounds, containing at least 489 distinct types. Over 70 of these are produced exclusively within the cannabis plant . Each specific species has different proportions of these compounds, which are also effected by environmental factors during production and processing. There is currently little available data […]

Campaign falls short, but will try again   By Judith Stamps In Sept. 2013, cannabis activists in B.C. petitioned to create a future for themselves other than the one imagined for them by their federal government. While the attempt failed numerically, it succeeded in broadening the network of like-minded marijuana activists in B.C. If their […]